Two of the biggest and most discussed topics in the past couple of years or so have been Bitcoin and artificial intelligence with machine learning. Bitcoin obviously had a real peak around the beginning of 2018. Just have a look at Google Trends.

But why do I bring this up here? Bitcoin is not even a technology, but an application on top of one.

Replace Bitcoin with blockchain, and the picture gets somewhat clearer.

As most of you do know by now, blockchain is a technology that stores data records (blocks) in a cryptographically secured and distributed way. Each block is linked to its predecessor by a hash code and stored in a multitude of places. Changes to the data are appended to the blockchain, as data cannot be changed anymore once added to the chain. The combination of the distributed nature with the hash code makes it extremely hard to tamper with the data. This is depicted in the very simplified diagram below.

But still, what do they have in common besides being near the top of Gartner’s 2017 technology hype cycle? After all, they seem to be on kind of different sides of the innovation spectrum: AI currently is all about centralized intelligence and data platforms while blockchain is all about distribution, decentralization, and openness.

But then, both technologies enable us to do a thing differently and perhaps better; or, in other words, iterate a solution. Examples for this in the CRM arena include AI based opportunity scoring as e.g. Clari is delivering. The classic example used for blockchain technologies is the cryptocurrency, or more generically, a distributed ledger. In both examples something existing is done differently, or better.

Both technologies are enabling us to do or design new things. Examples here include AI-based pattern recognition in very big data, prescriptive analytics, or blockchain based smart contracts.

And then both technologies can be genuinely disruptive, means they are enabling us to do things that make old ones obsolete. 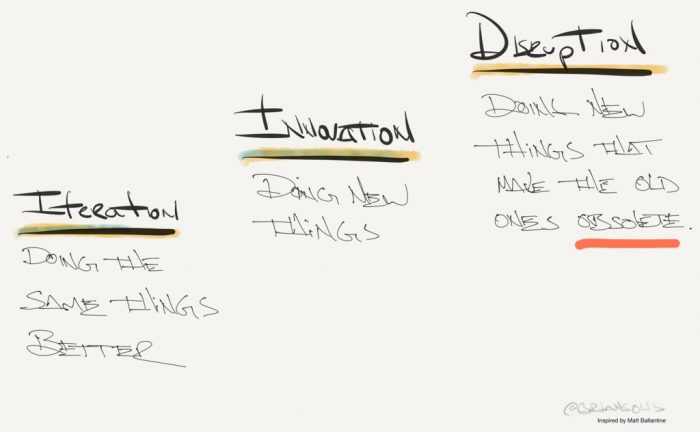 Among applications in this category I would place self driving vehicles (which are not yet there to a level 5 extent) or totally new banking models that disinter-mediate retail- or investment banks (a pipe dream, if you ask me, but that is another story).

But there is more!

How about an open AI for everyone or a decentralized neural network?

In my first article in this column, titled ‘Why AI, Machine Learning, And Bots? Better Experiences’ I depicted the ongoing and future commoditization of AI. It started with traditional analytics and will move on until cognition technologies are not worth a mention anymore.

Along this chain, Artificial Intelligence and blockchain can join forces to improve customer engagement and therefore the experience on all three levels, predominantly on the disruption level.

For example, blockchain can improve machine learning by adding a layer of trust to the underlying data. This can help algorithms find better results, for example in image recognition problems. This application would be somewhere between iteration and innovation (doing something better, or doing something new).

How about using blockchain and AI combined in an effort to fulfill GDPR requirements by first automatically finding and then deleting the data while being able to give customers a cryptographically secured deletion protocol?

Or, blockchain can help delivering a tamper-proof explanation system for an AI, delivering explanations that not only data scientists should be able to understand.

And modern marketing systems are among the ones relying most on AI technologies to be able to cope with the massive amount and velocity of data.

This short and far from an exhaustive list of possible synergies between AI and blockchain shows that there are quite some useful opportunities to use these technologies in combination.

What does it mean?

First of all, there needs to be a warning and a caveat! Especially blockchain is in a state of very serious hype. Currently, there are many fragmented offerings, there is no common standard as the technology is young and it is not yet proven at scale.

At this time I do not see a serious application that adds value at scale. Sure, there are implementations, but these are mainly closer to a proof-of-concept stage than adding real business value. Representatives from an innovative utilities company that I recently spoke to, stated that they did not yet find a business case that stacks up.

The technology is hungry for both, computing power and storage.

Instead there are big increases in company valuation after merely mentioning blockchain initiatives. Remember Kodak?

And there is a caveat: I am not a lawyer!

Having said that, it is important to have a look at the intersection of blockchain and artificial intelligence.

Many companies are likely to have implemented AI supported systems of one kind or the other.

Given that, it is time to have a look at where blockchain based processes possibly could add value in the customer interaction. At the outset, this is wherever trust can be built.

An application that helps to build trust and is interesting for many companies is the smart contract. This has been written about that often that I will move on.

As already mentioned above one of the possible scenarios to add trust is the by having a blockchain-enabled process support the requirements of GDPR. This can be by storing data in combination with a blockchain (not inside the blockchain), effectively securing it. Or there could be a process that at least provides a blockchain-supported ‘proof’ of deletion.

Storing data linked to a blockchain can support both, the right of information, and the right of deletion. The right of information is supported by the data being easily retrievable through the chain, which also helps destroying the data. Data might also be within the blockchain. Actually this is the default approach. In this case the data is actually not deleted but it is rendered permanently inaccessible if the key gets destroyed. This is probably not GDPR compliant, though.

In combination with this topic, blockchain enabled identity provider are emerging. Examples are Peer Mountain, uPort, or others. Indeed, there is already an identity foundation that aims to build an “open source, decentralized identity ecosystem for people, organizations, apps, and devices”.

There is no need to get into real sweat here. If there is a need for a CIAM (customer identity and access management) solution check whether they support distributed identities as part of your due diligence. CIAM solution providers have a high interest in staying on top of GDPR as well as distributed identities.

The current gold standard of CIAM solutions is Gigya.

The next topic to look at is how to get an explanation for the results it gives from an AI. The amount of data that they use is staggering, while the algorithm is akin a black box. While it is a far-fetched goal to have AIs explain themselves, trusted data as an input is a helper. Data that is secured by a blockchain inherently is trustworthy. While the AI will not necessarily be able to explain why it came to a conclusion the ability to feed it with trusted data that cannot be tampered with is a clear advantage. Conversely, writing the ‘decision process’ into a blockchain secured database makes these decisions auditable.

AI and blockchain are on opposite sides of the spectrum.