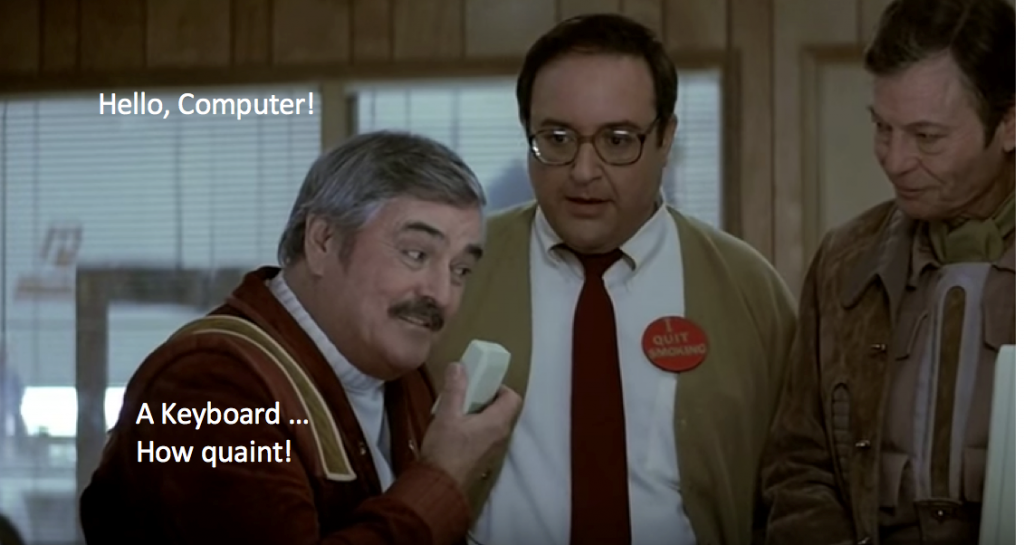 In the year 2016 bots, AI, and machine learning seemed to be all the rage, with all of these topics getting mixed into one big bundle. Many people seemed to forget that they are not the same but only related to each other.

Artificial Intelligence (AI) is an umbrella term that describes the part of computer science that deals with making computers emulate human intelligence. Machine learning is the part of AI that makes a computer appear intelligent.

Bots are an application — an application being most helpful if it is based upon a minimal level of (artificial) intelligence, and that particularly serves interaction purposes. One could also say that bots, especially chatbots, are a UI technology. Another aspect is that an application that gets exposed by a bot can have the ability to act, not only analyze. But then, the times of Commander Data from Star Trek, Wall-E, or HAL 9000 from Space Odyssey are still, well, Science Fiction.

More generally, there are applications that use the services provided by all three.

Less frequently talked about in this context, but even more important than e.g. the hyped topic that AI, machine learning, and bots are, is analytics. Essentially, any AI, including business AI, is nothing more than advanced applied analytics – applied with the purposes of automating tasks and getting better results, ultimately via a self-regulating learning process. ‘Applied’ in a sense that data is not only presented for human decision making but ultimately for decision making of machines themselves.

AIs are increasingly used in businesses to improve all business areas along its value chain, including marketing, sales, service, and e-commerce, but also HR and finance.

Given that this is the case, where do AI, machine learning, and analytics go? And where are we today? What does it mean in a business context? These are questions that I want to cover in this and subsequent posts that will make up a good part of this column.

Analyst Esteban Kolsky sees the way leading from (traditional) analytics via predictive analytics to automation and then AI/cognition/machine learning.

In other words, Esteban sees analytics going forward from answering the question “What happened?” to “What will happen?” and ultimately to “What can I do for you?”.

Abinash Tripathy, CEO of Helpshift, sees intelligence move on from providing notifications, via suggestions, to predictions, and then to conversations – which can be seen as a subset of the wider environment that Esteban sees, focusing on service scenarios.

And, of course, we have seen the dawn of chatbots this year with use cases that stretch from sales scenarios through customer service.

In my eyes there are two more important steps in this evolution:

During this evolution AI will deliver increasing value, which will go along with increasing commoditization, and a change of the human-to-computer interaction models. The mot du jour is ‘democratization’. 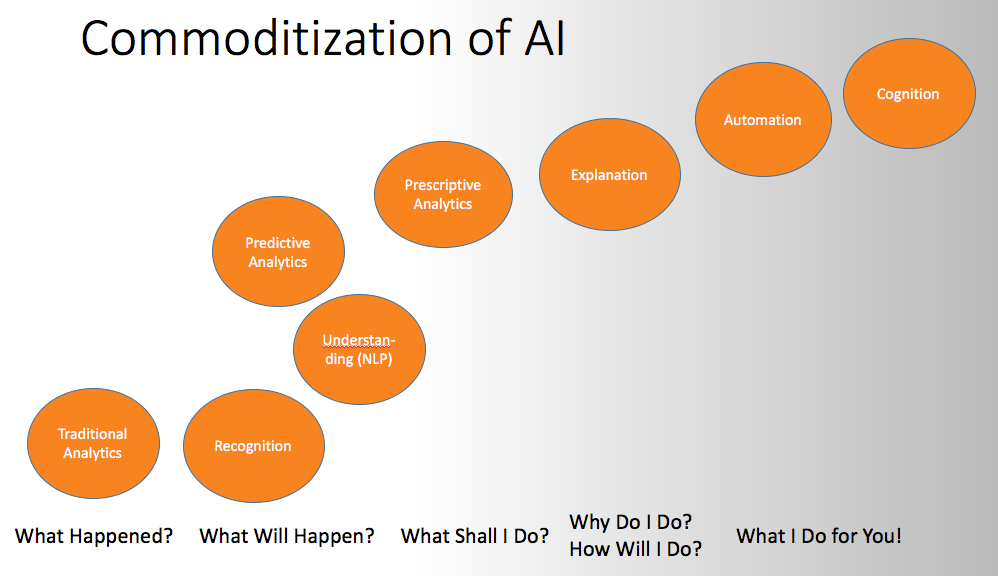 But, however we call it, from a business — and customer — point of view, these trends have advantages: More (customer- and business) value, at lower cost, with more efficient interaction.

We can observe already now that the main form of human-to-machine interaction will change from point, click and type to touch and talk, via touch, type, and talk. Cortana and Siri have arrived on computer desktops. Conversational interfaces will become part of the next norm. The famous scene from Star Trek IV – The Voyage Home has already partly become a reality.

Holger Mueller from Constellation Research is postulating that we will see voice interaction being our main interaction model with computers sooner, rather than later.

Voice and touch will replace click and type faster than we ever thought says @holgermu MyPoV: It's already well on the way.

It is still in the beginning, but the trend has started.

What Does It Mean?

Experiences for customers, suppliers, partners, and employees. Experiences that couldn’t be delivered before and others that can be delivered in a better way. Business leaders need to think strategically about what experiences they do want to deliver, and how; and how to deliver them effectively and efficiently.

To deliver these experiences, they need to be clear on their strategy and build a clear vision. Once this is established, they need to give in-depth consideration to the technology platform to avoid repeating the old mistake of creating silos. The platform is the foundation of a business’s ability to deliver, and to deliver in a future proof way. As the platform connects applications, people, and processes it needs to be open and extensible.

Select one that that fulfills current and future needs and that supports the transition from current- to target state. This is the important first step of a Think Big – Act Small framework that helps in delivering continuous increments of value created to employees and customers, while keeping strategic priorities in mind.

Once this is done the business can endeavour implementing uses for AI/bots to improve experiences throughout its value chain, in an agile way, following changing priorities.

And this is what I will cover in subsequent articles of this column.

My Customer is So Annoying! How to Rationally Decide if the Time Has Come...