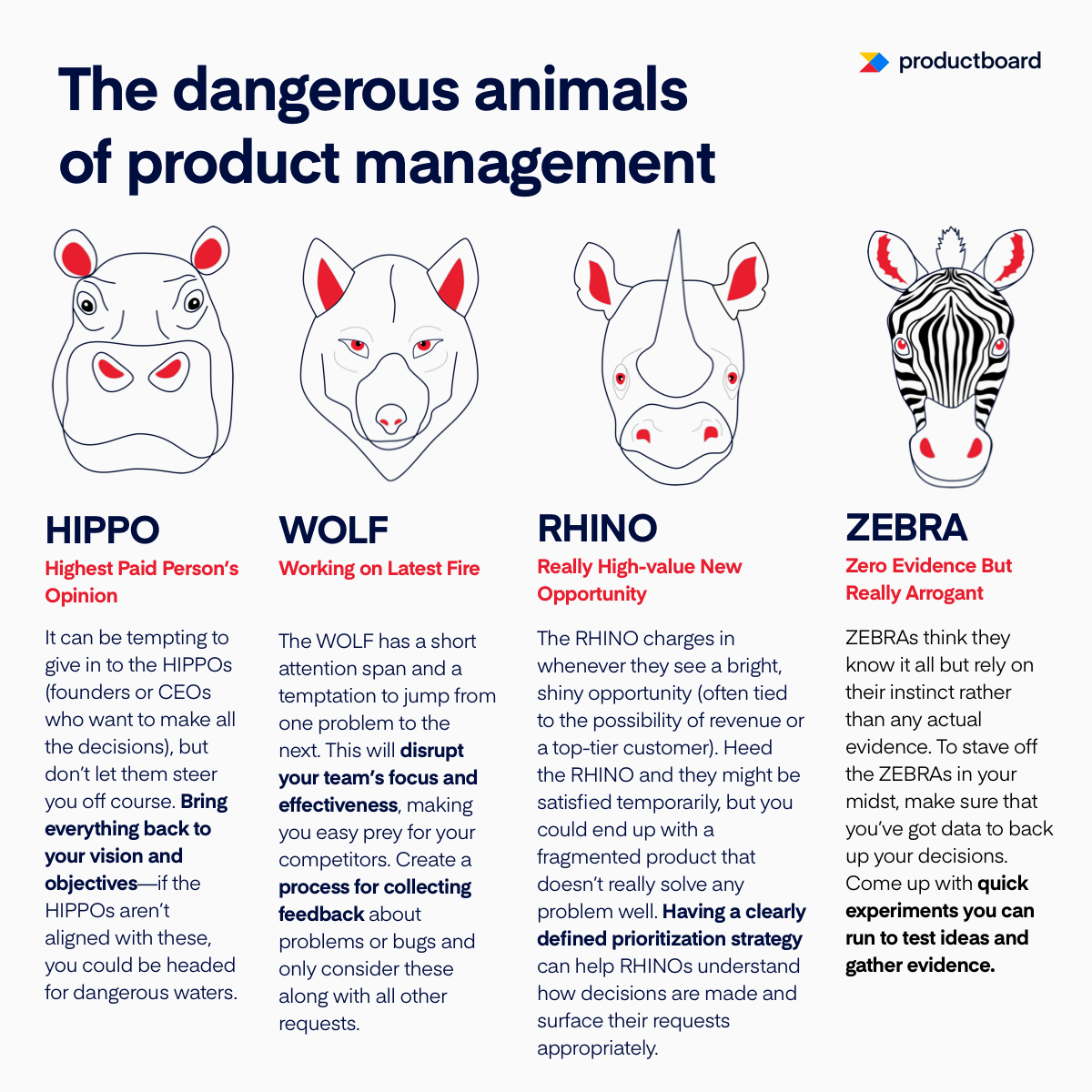 The world of the product manager is wild. You’re often heading into uncharted territories, trying to make sense of the chaos around you. And then there are the dangerous animals you encounter along the way—the HIPPO, the RHINO, the WOLF, and the ZEBRA (to name a few). While many of these creatures exist throughout the business world, they can be especially disruptive to product teams. When we give the animals too much power, we lose sight of our strategy and approach to prioritization. As a result, we end up making the wrong decisions and ultimately compromising the direction of our product. In this article, I’ll provide a quick overview of each animal, explain why they’re so dangerous, and offer a few tips for how to tame them.

The HIPPO is often an executive or co-founder who wants to call the shots. And while they certainly have experience and knowledge, this is no substitute for actual data and input from customers.

The danger of the HIPPO is that their actions can be demoralizing and disempowering. The product team that’s been doing the research, talking to customers, and collecting data to form deep user insights suddenly has to drop everything and reprioritize. They might question the validity of the HIPPO’s argument, but it can be difficult for teams to stand up to HIPPOs, either to disagree with them or clarify whether they’re simply offering an opinion or defining a new direction.

So how do you tame the HIPPO? It helps to depersonalize the discussion. Bring it back to data. Show the HIPPO the metrics and information you’ve used to arrive at your current priority and ask them whether that changes their recommendation. Do they have access to other information you should know about? If so, that may very well change your course. But if not, you might convince them that your current approach makes the most sense.

The WOLF (Working On Latest Fire)

The WOLF will often appear when your team is dealing with unpaid technical debt. This is especially common when you prioritize speed above everything else for a substantial period of time. Dean Peters compares the WOLF to a loan shark who shows up at the worst possible time to rearrange your kneecaps with a 2×4. There’s an urgency about meeting their demands, but it also means you have to put all your other work on the backburner.

The trouble with following the WOLF is that you can easily lose track of your overall product strategy. If you only ever go from putting out one fire to the next, you aren’t moving toward any overarching product goals. And if you’re not being intentional about addressing technical debt, those little embers eventually turn into a bonfire.

The RHINO tends to be a little too obsessed with one particular feature. They will often be a salesperson who’s convinced that building this one thing is the key to landing an important deal.

If you listen to the RHINO and build the feature they’ve requested, they might be satisfied temporarily. But, of course, there will always be another high-value new opportunity they want to chase. So you can quickly find yourself in a situation where you’re building all these features that aren’t connected to your overall objectives or strategy. This can result in a fragmented product that doesn’t really do anything well.

This is where having a clear prioritization framework can really help. Take the input from the RHINO, apply it to your framework, and show them where it fits in and when. This will show them that you’re not just saying no (or yes) randomly—you make all your decisions in the same manner.

The ZEBRA is a manifestation of unchecked cognitive bias. They rely on their gut to determine what’s important. They will express their opinions strongly, but if you press them, they won’t be able to offer evidence for how they’ve reached this specific conclusion. Rather than going through Dan Olsen’s Lean Product model of putting out a hypothesis, testing and validating, then using that to inform future decisions, they go straight from idea to build.

The danger of letting the ZEBRA chart your course is that you’ll be building without customer research or market validation. And the less you test your ideas, the more risk you’re assuming.

The best way to tame a ZEBRA is to bring them along for the ride. Invite them to participate in your research. You can take their assumption and find a low-risk way to test it out. Let them know that you’re willing to run small experiments, but you won’t invest significantly in their idea until you have some proof of life.

The dangerous animals give us a simple and memorable way of thinking about some of the common personalities we encounter as product managers. And, from time to time, we may be guilty of taking on these characteristics ourselves. This is a great reminder in the importance of having a clearly defined strategy and approach to prioritization. The more we keep our overarching goals and processes in mind, the less likely we are to let our product turn into an unruly beast.

Special thanks to Dean Peters, the “zookeeper” who helped popularize these examples within the product world.