We released a new member survey last week at the CDP Institute. You can (and should) download the full report, so I won’t go through all the details. You can also view a discussion of this on Scott Brinker’s Chief Martech Show.  But here are three major findings.

We identified the top 20% of respondents as leaders, based on outcomes including over-all martech satisfaction, customer data unification, advanced privacy practices, and CDP deployment. We then compared martech practices of leaders vs. others. This is a slightly different approach from our previous surveys but the result was the same: the most successful companies deploy structured management methods, put a dedicated team within marketing inside of martech, and select their systems based on features and integration, not cost or familiarity. No surprise but still good to reaffirm. 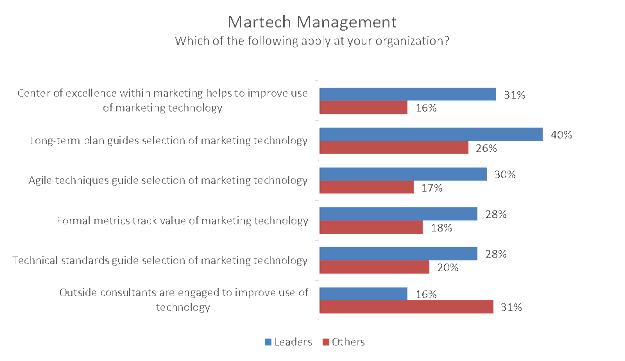 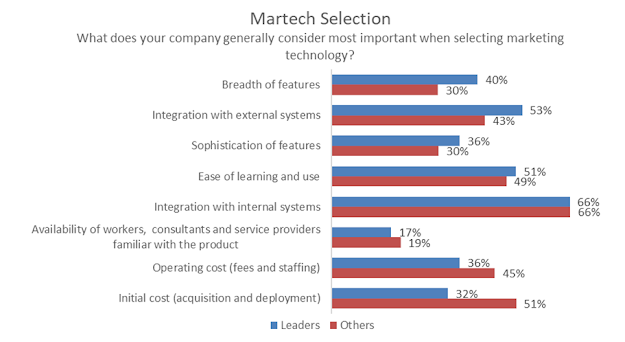 For years, our own and other surveys showed a frustratingly static 15%-20% of companies reporting access to unified customer data. This report finally showed a substantial increase, to 26% or 52% depending on whether you think feeding data into a marketing automation or CRM system qualifies as true unification. (Lots of data in the survey suggests not, incidentally.)

The survey showed a sharp growth in CDP deployment, up from 19% in 2017 to 29% in 2020. Bear in mind that we’re surveying members of the CDP Institute, so this is not a representative industry sample. But it’s progress nevertheless. 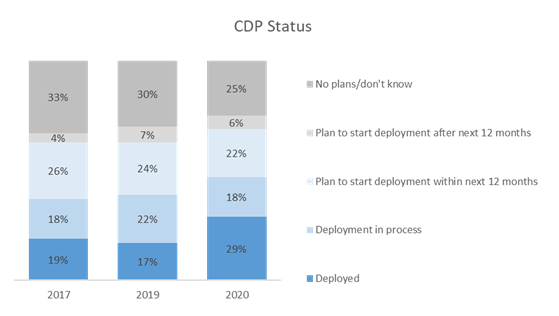 Where things got really interesting was a closer look at the relationship of customer data architectures to CDP status. You might think that pretty much everyone with a deployed CDP would have a unified customer database – after all, that’s the basic definition of a CDP and the numbers from the two questions are very close. But it turns out that just 43% of the respondents who said they had a deployed CDP also said they had a unified database (15% with the database alone and 28% with a database and shared orchestration engine). What’s going on here? 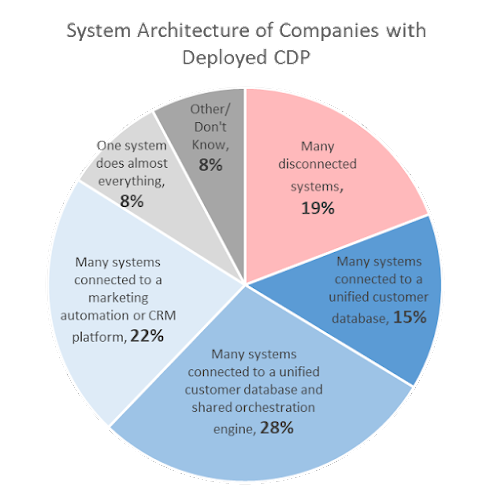 The obvious answer is that people don’t understand what a CDP really is. Certainly we’ve heard that complaint many times. But these are CDP Institute members – a group that we know are generally smarter and better looking and, more to the point, should understand CDP accurately even if no one else does. Sure enough, when we look at the capabilities that people with a deployed CDP say they expect from a CDP, the rankings are virtually identical whether or not they report they have a unified database. 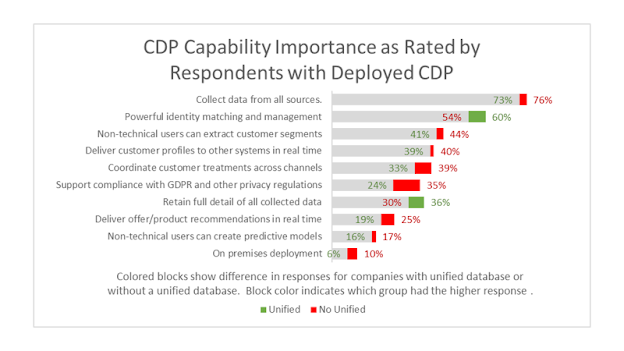 (Do you like this graphic format? It’s designed to highlight the differences in answers between the two groups while still showing the relative popularity of each item. It took many hours to get it to this stage. To clarify, the first number on each bar shows the percentage for the group that selected the answer less often and the second number shows the group that selected it more often. So, on the first bar above, 73% of people with a unified customer database said they felt a CDP should collect data from all sources and 76% of those without a unified database said the same. The color of the values and at the tip of the bar shows which group chose the item more often: green means it was more common among people with a unified database and red means it was more common among people without a unified database. Apologies if you’re colorblind.)

Answers regarding CDP benefits were also pretty similar, although there begins to be an interesting divergence: respondents without a unified database were more likely to cite advanced applications including orchestration, message selection, and predictive models. Some CDPs offer those and some don’t, and it’s fair to think that people who prioritized them might consider themselves having a proper CDP deployment even if they haven’t unified all their data. 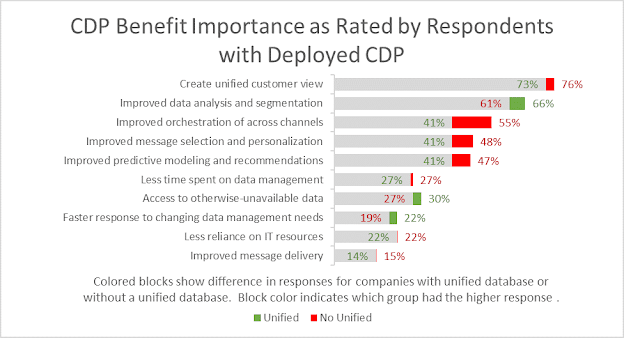 But the differences in the benefits are still pretty minor. Where things really get interesting is when we look at obstacles to customer data use (not to CDP in particular). Here, there’s a huge divergence: people without a unified database were almost twice as likely to cite challenges assembling unified data and using that data. 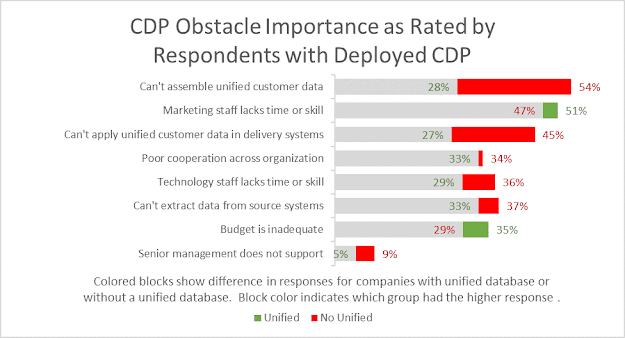 Combining this with previous answers, I read the results this way: people who say they have a deployed CDP but not a unified database know quite well that a CDP is supposed to create a unified database. They just haven’t been able to make that happen.

This of course raises the question of Why? We see from the obstacle chart that the people without unified data are substantially more likely to cite IT resources as an issue, with smaller differences in senior management support and data extraction. It’s intriguing that they are actually less likely to cite organizational issues, marketing staff time, or budget.

Going back to our martech practices, we also see that those without a unified database are more likely to employ “worst practices” of using outside consultants to compensate for internal weaknesses and letting each group within marketing select its own technology. They’re less likely to have a Center of Excellence, use agile techniques, or follow a long-term martech selection plan. 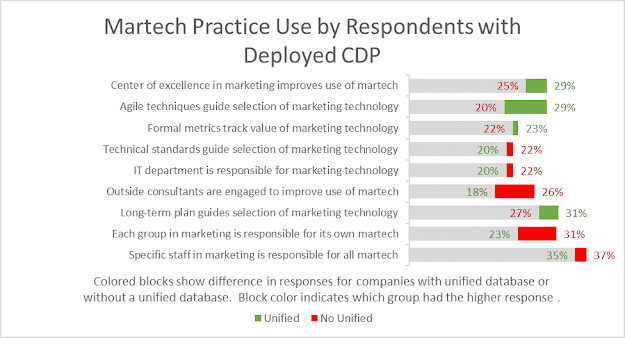 So, whatever the problems with their IT staff, it seems at least some of their problems reflect martech management weaknesses as well.

The survey report includes two other analyses that touch on this same theme of management maturity as a driver of success. The first focuses on cross-channel orchestration as a marker of CDP understanding.  It turns out that the closer people get to actually deploying a CDP, the less they see orchestration as a benefit. My interpretation is that orchestration is an appealing goal but, as people learn more about CDP, they realize a CDP alone can’t deliver it.  They then give higher priority to less demanding benefits.   (To be clear: some CDPs do orchestration but there are other technical and organizational issues that must also be resolved.) 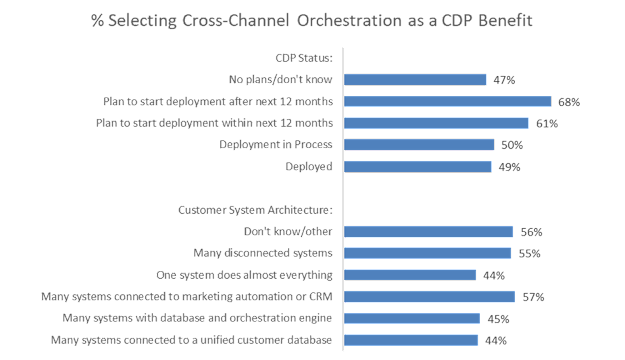 We see a similar evolution in understanding of obstacles to customer data use. These also change across the CDP journey: organizational issues including management support, budget, and cooperation are most prominent at the start of the process. Once companies start deployment, technical challenges rise to the top.  Finally, after the CDP is deployed, the biggest problem is lack of marketing staff resources to take advantage of it. You may not be able to avoid this pattern, but it’s good to know what to expect. 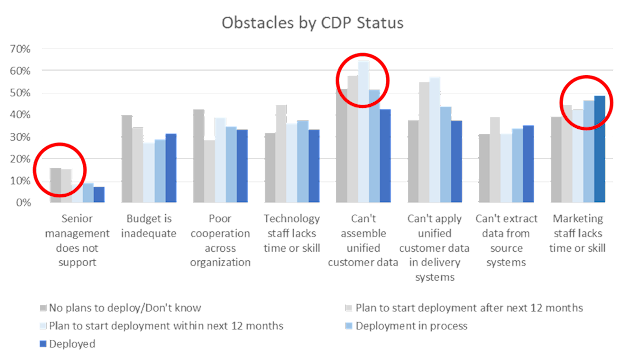 The other analysis looks at CDP results. In the current survey, 83% of respondents with a deployed CDP said it was delivering significant value while 17% said it was not. This figure has been stable: it was 16% in our 2017 survey and 18% in 2019. 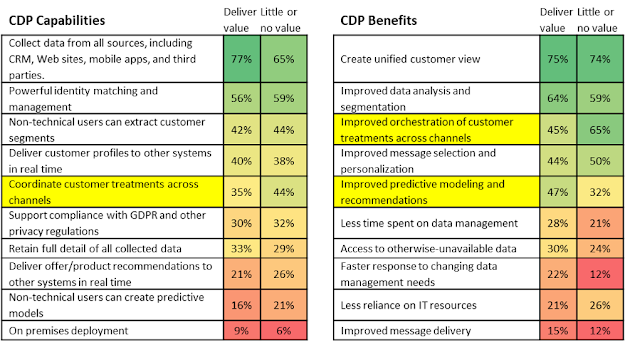 When it came to obstacles, the dissatisfied owners were much more likely to cite IT and marketing staff limits and organizational cooperation. The divergence was even greater on measures of martech management, including selection, responsibility, and techniques. 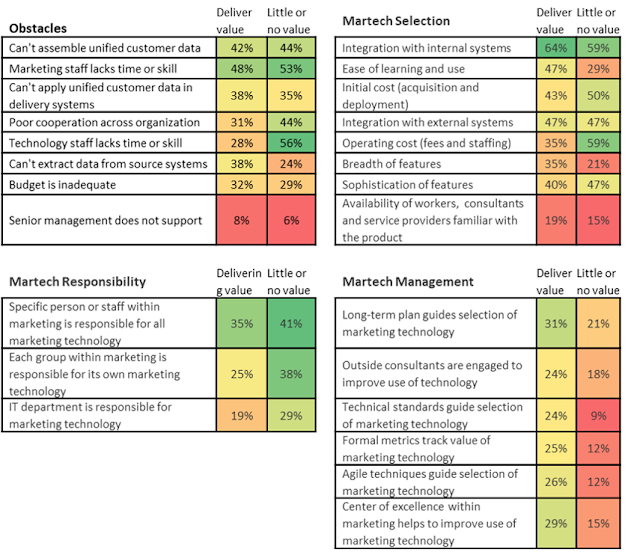 In short, the dissatisfied CDP owners were much less mature martech managers than their satisfied counterparts. As CDP adoption moves into the mainstream, it becomes even more important for managers to recognize that their success depends on more than the CDP technology itself.

There’s more in the report, including information on privacy compliance, and breakouts by region, company size, and company type. Again, you can download it here for free.