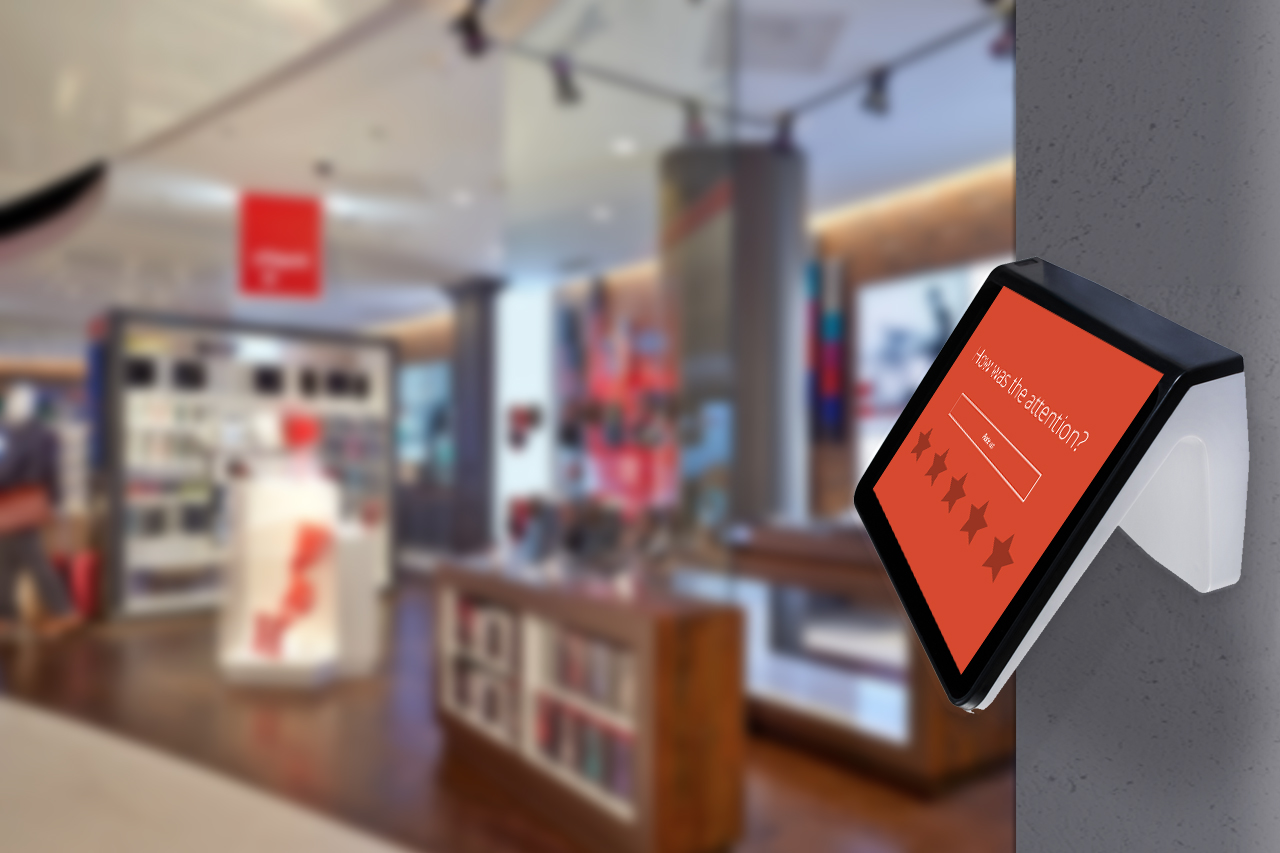 Business leaders across the board recognize that gathering positive and negative feedback is the most effective means of molding a service around the real wishes and needs of consumers. Esteban Kolsky the founder of ThinkJar argues that 67% of customer churn is preventable if a problem is resolved at the first engagement. However, gathering the feedback to highlight these pain-points is not as simple as it sounds. According to Kolsky, only 1 out of 26 unhappy customers complain and 91% of unhappy customers who don’t raise their concerns churn.

David Neeleman, CEO of Latin American airline Azul claimed all director level employees at his company seek ‘in-person’ feedback from every passenger who boards an Azul flight. While this method is undoubtedly effective -albeit time and labor intensive- this means of gathering feedback would be inappropriate in more sensitive situations. Imagine you had just used a public restroom in an airport and were met by a company representative when you opened the cubicle door? Would you be likely to offer honest, constructive comments about your experience?

So how are companies using modern technology to receive ‘on the spot’ feedback in a manner which doesn’t bother consumers?

While Azul airlines’ tactic is undoubtedly useful, most companies don’t have such the luxury of having such a captive audience, strapped into their seats with all of their personal information clearly recorded on an internal system.

For companies of all shapes and sizes, one of the main challenges is reaching consumers at the opportune moment, when the experience is fresh, and they have real opinions to share, in a manner which isn’t bothersome or time-consuming.

This is especially important for public services which are utilized by a high volume on one-off users every day. In general service centers such as DMV offices, hospitals and airports, which see hundreds, if not thousands, of visitors pass through on a daily basis, it is essential to receive feedback for factors such as hygiene, staff attentiveness and facility maintenance at ‘touch points’ — zones where high volumes of users pass through daily.

Changi Airport in Singapore has made impressive improvements to productivity and service standards by launching an instant feedback system (IFS) that allows visitors to rate its staff and facilities at key airport touch points, such as check-in, immigration, customer service and information counters, restrooms, shops and hospitality outlets. 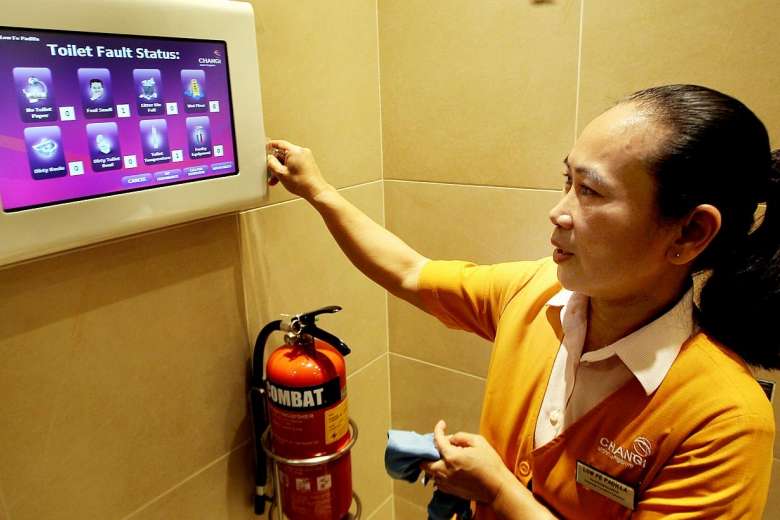 With just a few clicks on a screen, users can register their satisfaction levels immediately after using the service or after a service encounter with frontline staff by choosing from three simple faces, smiley, normal or unhappy. The happiness ratings are then delivered as live reports to agency supervisors, allowing them to take necessary action in real time. A similar system has been rolled out in Brisbane airport, Australia, where interactive feedback systems (IFS) are installed in toilet facilities, which have traditionally been ‘weak points’ for customer service.

How could new technology streamline customer feedback at pressure points

Heathrow international airport sees on average upwards of 200K visitors pass through each day and Grand Central Station in New York sees a staggering 750K users daily. Staffing these vast, constantly busy areas with enough customer service attendants to individually attend to the needs of each traveller would be extremely expensive. On top of that, the reality is that most disgruntled users (25 out of every 26 people) simply do not go out of their way to raise their concerns or issues, or seek advice which could improve their experience. So how could new tech take up the slack and offer a communication channel with users at touch points?

Japan’s biggest bank Bank of Tokyo Mitsubishi UFJ rolled out customer service robots in a number of its branches in April 2015. Nao, a 58-centimetre tall humanoid robot, which was built by Aldebaran Robotics, is programmed to answer most basic customer-service questions in 19 different languages, as well as analyze a client’s facial expressions and behavior to assess whether they appear to be content with service or not. Kazunobu Takahara, a bank spokesman told the WSJ, “We can ramp up communication with our customers by adding a tool like this,”.

Aldebaran Robotics, the creators of Nao, has also had great success with their previous model Pepper, a service robot which is capable of recognising human emotions and adapting his behaviour to the mood of his interlocutor. More than 140 SoftBank Mobile stores in Japan, various Carrefour supermarkets in France and the French National Railway System are using Pepper as a new way of welcoming, informing and entertaining users.

DigitalGenius was created to help bring automated customer service to coffee shops and other small businesses, but has blossomed into something much more advanced. The company has created a machine learning A.I algorithm which can have seemingly human conversations with users via SMS.

DigitalGenius ‘learns’ by ingesting conversation data from historical and real-time conversation logs provided by businesses, and can therefore be trained to naturally answer real problems which users commonly raise.

To motivate users to make enquiries, and offer feedback, brands and services need simply post the connected phone number to SMS questions to DigitalGenius at weak and pressure points. They could also use push-notifications or iBeacon technology to direct users to the service from directly within their smartphones.

Facial recognition software was traditionally used by the police, airport security, immigration and in casinos, but has now been rolled out by a number of leading retail stores such as Saks and Macy’s. When a user passes by a face recognition camera, it converts the person into a biometric template, and scans the template against a database of previous visitors. These systems were traditionally used to target shoplifters, but have evolved to being used to assess customer ‘dwell times’ at different products and areas of the store, and to create digital profiles for individual shoppers based on data accumulated about their buying habits.

Using iBeacon technology, these individual users can also be targeted with mobile advertising using pop-up adverts, deals and personalized marketing messages. Using the same technology, clients could be sent pop up ‘customer feedback’ questions, and if they respond negatively, the company would be able to immediately contact them either in person in the store – as their photo would be recorded on their profile- or via mobile or email, offering a means to rectify the problem, or offering a deal or reduction to keep them sweet.

Using technology makes getting feedback easier and quicker, but also poses challenges if the technology cannot fulfil roles to the same level as a human being could, as people are sensitive to being ‘fobbed off to a computer’. People who offer feedback want to know that the brand or service they are using acknowledges their concerns, and is taking action to rectify problems.

While much of this tech provides an innovative and timely method of customer contact, that’s only half the battle. Companies need to use the information they garner to bring the client back onside. The benefit of using tech to do this is that every single interaction with a client is logged, and the details are saved for future use. If their contact details are logged, then real human customer service teams can follow up with the user, and try to resolve the issue on the spot. With Esteban Kolsky claiming that it is 6-7 times more expensive for companies to attract new customers than to keep existing customers, the motivation for brands and services is there. It will be those who are most open to advancement who will stay ahead of the competitors with their customer service.