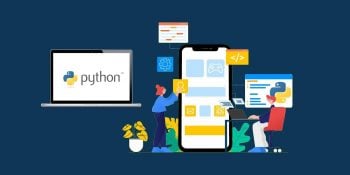 In today’s world, applications have become an indispensable part of every business. Be it mobile apps or web apps, applications are a great way for businesses, to reach their target audience and achieve their goals much faster. Applications are not only beneficial for businesses but are also, very much convenient for users using them. Now, more and more businesses are launching their apps to meet their growing business demands.

As per Statista, Python was the most sought-after programming languages among software developers worldwide. This high-level language was developed to focus on code readability. Python development services are very much popular these days, as using this language developers can easily build, even the most complex web solutions, using fewer lines of code.

Like every other programming language, Python also has its features and limitations. However, the number of advantages Python has, clearly overpowers its limitations. There are numerous areas where Python shines. However, Python is really helpful when it comes to developing some complicated apps with complex algorithms. This programming language also excels in developing anything related to Artificial Intelligence and Machine Learning.

However, if we talk about its limitations, Python lacks execution speed. Since, in Python, code is executed line by line, this slows down the executions process. Also, Python is not suitable for developing memory-optimized apps. This is not all; there is a complete list of the pros and cons of using Python, which will help you decide, whether it is a suitable match for your project or not.

A framework is a set of packages or modules which enables developers to develop applications or services without having to handle much of the details like protocols, sockets, or process management. Python offers some of the great frameworks to develop scalable and high-performing applications.

The Python web frameworks are classified into three main categories, depending on the type of development they are used in.

Full-stack frameworks are the ones that offer an all-in-one solution i.e. that they offer everything that a developer could need while developing an app. Full-stack development services are very much popular as these frameworks are capable of developing and making changes to front-end interfaces, back-end services, and databases. However, when it comes to Python, it has more than one full-stack framework. Django, Pyramid, TurboGears are a few examples of this framework.

Microservice frameworks, also known as minimalistic web app frameworks, are the ones that have just the basic components which are required to develop an app. These frameworks lack full-fledged functionality like a full-stack framework but come really handy while developing apps. Some of the most popular micro-frameworks of Python are Flask, Bottle, CherryPy, Falcon, Hug, etc.

Choosing the right framework is very important for the success of your project. Out of all the Python development frameworks available, Django and Flask are the most popular and commonly used frameworks.

Type of Applications That Can be Developed Using Python

Now that we have talked about everything related to Python, let us know about the various types of applications that can be developed using this high-level language.

These days, the internet is flooded with different types of audio and video content, and there is a huge demand for such apps among users. Experts believe that with some of the amazing libraries like openCV and PYDUB, Python is an optimal choice for the development of these kinds of audio/video apps.

Netflix, Spotify, and YouTube are some of the great examples of entertainment apps, that have been developed using Python. Netflix and YouTube are the world’s most used video streaming apps, whereas Spotify is a great music streaming app, having access to millions of songs. Developers love using Python as it has a clean yet expressive syntax, which makes the app development process very easy.

Console Applications, also known as command-line applications, are often referred to computer programs, that are designed to be used as plain text. These applications do not have any images or a graphical user interface. These apps can be a great option for businesses, looking to offer a simple interface, and do not require much user interaction. Such apps are navigated by typing commands at terminals or shells, rather than using the mouse.

Due to the flexibility and ability to work well with existing programs, Python is one of the most used languages for developing CLI apps. A large number of libraries and modules are available in Python to support the development of these apps. Git and Mercurial are the example of some of the console apps developed using Python development services.

Python is very much easy to use and learn languages. Developers loved writing codes and creating robust applications using this high-level language. One of the main features of Python is scalability, and this is the reason why it is a popular language when it comes to developing gaming apps.

Also, Python is a great option when it comes to designing gaming tools. It can also be really helpful in designing complex gaming levels. Python offers real-time testing which speeds up the development process. Python has some great libraries and a large collection of game designing tool, which simplifies the process and reduces the effort of developers. Civilization IV, EVE Online, Battlefield 2, and Sims 4 are a few games that have been developed using this language.

Administrative tasks can sometimes get very tedious. They involve the use of a large amount of data, which can sometimes be very difficult to manage manually i.e. without the use of any technology. However, with the use of Python, one can get administrative apps developed from an expert, that will not only make their work easier but will also save their efforts.

Developers love working with Python as it enables them to easily interact with the various operating systems using the OS module. This module facilitates connection with the operating system that Python is running on. Also, IO operations are easily available, including easy reading and writing to the file system. Python makes everything so simple and convenient when compared to other programming languages.

Machine Learning and Artificial Intelligence have taken the world by storm. These technologies have made our lives really simple. Businesses across most industry verticals are using this technology to increase their reach to the customers and scale up business operations.

With its outstanding libraries like Pandas, Scikit-Learn, and NumPy, Python is highly preferred in Machine Learning and Artificial Intelligence apps development by most developers in the world. It makes the process of app development, a lot simpler and faster. Since Python is an easy to use language, experts can easily create robust and highly efficient ML and AI apps, using this language.

Blockchain is one of the most trending technologies these days. It helps add an extra layer of security to your data by using cryptography. Its decentralization feature offers much more security than any other system. If you require a blockchain application for your business and are confused about the language in which you should get your app developed, Python is your go-to option.

Python has a very simple and clean syntax which makes the app development process a lot easier. Developers developing blockchain apps prefer Flask framework as it facilitates HTTP requests to communicate with blockchain conveniently. Flask offers a wide range of attributes, which are just apt for creating these kinds of applications.

The importance of e-commerce in our lives is very much evident. It is one of the fastest-growing industries. Not just for users, it brings in a lot of profits to the businesses. Most people are on their smartphones all the time. People do not like to go to a supermarket and wait there in those long queues for their turn. E-commerce apps are just a more easy and convenient option, which is preferred by people across the globe.

Python is a highly scalable language and brings in agility to the development process. So, if you are looking to get an e-commerce app developed, there could be no other language better than Python, to create a robust, interactive, and appealing app.

Handling a large amount of data is not easy, but if handled properly, it could earn a lot of profit for your business. Python has some amazing libraries like Pandas and NumPy, which makes the process of data extraction a breeze.

If we talk about data visualization, libraries such as Matplotlib and Seaborn are really helpful. Using these libraries, Python can be easily used to plot graphs and represent data in a much better way. Most people prefer using proficient mobile app development services, for getting advanced apps developed for data science and data analysis.

Python can be a great option to develop various data scrapping apps. It has some amazing libraries like Requests and some powerful tools like Beautiful Soup, which makes the process of scraping of the data from various web sources easier.

The main reason why Python is a preferred language to develop data scrapping apps is its simple and easy to use syntax. These kinds of apps can be useful for comparing prices, job listings, research and development and much more.

Python is a great language to develop even the most complex desktop applications. Due to its scalability and efficiency, Python app development is highly in demand. A library such as Tkinter is used to develop a highly interactive user interface.

Also, Python has a wide range of toolkits like toolkits wxWidgets, Kivy, and PYQT, that can be used to develop amazing desktop applications, which can run on various browsers.

So, as you can see Python is an extensively used language that offers a number of benefits. No matter what type, or for which industry, you want to get an app developed; Python can surely help you with this. With the amazing libraries, modules, and toolkits, you can easily find a solution for anything you could dream of getting converted into an app. Scalability, easy to use, clean yet powerful syntax, and flexibility, are some of the advantages which Python has over the other languages. So why wait, go get an app developed, to scale up your business and take your business to the new heights.