Many customer relationships involve the potential risk of encountering problems that the customer does not fully understand. In many cases, the customer does not understand what they have bought and in others, such as warranties and insurance, they are expected to understand which risks are being mitigated and which are not. The last two years’ debate on the risks of Covid provide many examples of both effective and ineffective approaches to communicating and dealing with risk.

Three challenges lead to at least thirty percent of all customer dissatisfaction and an even higher percentage of customer problems.

The challenge for communicators is that there is no certainty in the concept being communicated. The challenge for CX executives is avoiding unpleasant surprises and damage to loyalty. Almost every product, however humble, contains unpleasant surprises which are sometimes serious. For instance, a yogurt manufacturer found that their cherry yogurt occasionally included a cherry pit, despite its best-quality manufacturing efforts. Including a message on the package, “Caution, Real Cherries Have Pits!”, reduced claims for broken teeth by 50%. However, marketing almost always hates to mention problems or limitations. The CMO of a leading investment company, laughed nervously when I raised the topic, saying, “It’s not in the DNA of most marketing guys to talk about problems.”

This article will show both why you should communicate risk and the necessary aspects of mechanics and content to produce improved profits and customer satisfaction.

Why take the risk of transparency?

When you communicate a genuine risk of a product or situation, you are giving the customer more control over their environment, which, in the current society, is valued. It also demonstrates your mastery of the subject area and confidence in your product or service. Finally, it builds trust which is in very short supply. However, the communication must be couched in a manner that allows the customer to evaluate the risk in their situation.

Customers who are genuinely educated are much happier with products and, when problems occur, are much easier to deal with. An insurance company whose welcome letter specified three possible unpleasant surprises that most customers missed had fewer complaints and happier customers and often more revenue when the customer asked for additional coverage at extra expense. A major Japanese auto manufacturer found that customers who understood the basics of their warranty were only half as expensive in terms of goodwill costs when encountering a major repair out of warranty compared to uneducated customers. Juliane Snowden, a leading communications and crisis consultant at the Oratorium Group, suggests, “The clear communication of a risk creates a stronger bond with the customer in the long run – it allows the customer to make a conscious decision to accept the risk. If the adverse event does occur, the customer is more likely to demonstrate patience as the company addresses the event.”[1]

Finally, the 2021 CCMC National Delight Study found that customers who have been effectively educated are 40% more likely to spend much more with you and see your product as having higher than average value. These same customers who have been delighted with transparency and education tell more than four of their friends great things about the company, usually resulting in at least one of the friends becoming a serious prospect, and considering trying the product.

A standard objection by marketing and PR executives is that discussion of risks and problems is viewed as negative. The concern is that communicating possible or probable problems is that, “if we tell the customer of a problem in advance, they won’t purchase the product or they will shop for alternatives.” Working with a major insurance carrier, we notified customers 90 days in advance of how the market was evolving, resulting in a probable double-digit increase in premiums at renewal. Sales complained that most customers would start shopping and many sales would be lost. In fact, only about 3% of customers switched but the anger and dissatisfaction with the significant premium increase was reduced by over 80%. Previously, “surprise premium increase” had been the single largest point of pain, placing significantly more than 3% of sales at risk.

Ann Cleaveland, Jessica Cussins Newman, and Steven Weber go even further suggesting that the metric for success in communicating risk must change from avoiding negative press to equipping customers with the information they need to … manage their risk.”[2] Snowden adds, only half joking, “Can you imagine if all companies were run by risk-averse attorneys? How many successful companies would there be? Innovation requires taking risks. Longevity requires intelligently communicating risks. Since how we communicate is constantly evolving, how we communicate risk needs to evolve, too.”

Example of the potential payoff of clear communication on reduction of risk at a medical care institution.

The following is a scenario developed at a major medical institution based on an analysis of their patient experience as researched by CCMC staff. The patient advocate’s department found that when patients were well educated on risks in advance and, if a problem occurred, were honestly communicated with immediately, the risk of claims and malpractice lawsuits declined dramatically. The numbers in red are the best estimate of actual problems which occurred during the close to one million procedures performed. The circles indicate major areas of opportunity. 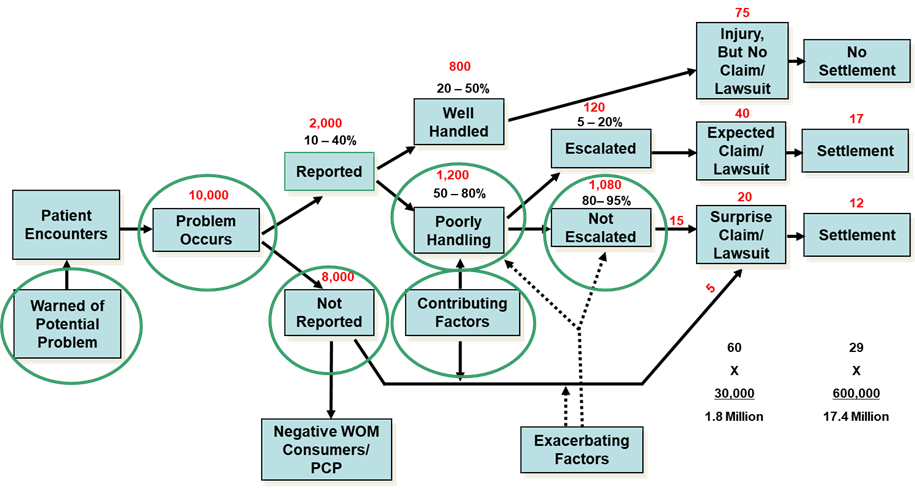 Only if the problem was poorly handled or not reported at all, did the experience result in costly claims or lawsuits.

Much of risk communication is dictated by the legal department responding to regulatory direction. Cleaveland et all point out that most customers suffer from notification fatigue.[3] Think of the five pages of terms and conditions for a software package where you click the acceptance box without reading or the side-effect notification at the end of every pharmaceutical ad on the evening news. You mentally and often physically skip past them

Verbal – A verbal briefing is somewhat effective if it deals with an immediate issue such as avoiding injury. However, customers will only remember a maximum of three things.

Written – The problem with written information is that most people will not read more than one paragraph or seven bullet points. If you have a contract, warranty, or instruction manual, you should assume that customers will not read it. On the other hand, a one-page quick start guide with simple graphics is very effective in communicating what to do and up to three possible risks of what not to do.

Video – Videos can be very effective if they are short and attempt to communicate only a few facts. A bit of humor enhances their impact. Funny airline safety videos are watched much more than bland ones. Likewise, Zipcar has a video on extending your reservation and Velcro has a hilarious video (https://www.youtube.com/watch?v=rRi8LptvFZY ) on not to use its name as a generic term. Likewise, Navigant Credit Union found that first-time home buyers were much easier to work with if they had viewed a video describing the process. This video is supplemented with a graphic – a picture is worth a thousand words.

Mobile Apps – Both Hughes Communications installers and One Las Vegas Credit Union desk personnel load the mobile app on the customer’s phone and drill them on the three most useful functions so that adoption is greater than 75%, even for customers over 55. Customers using the app are happier and cost less to service.

Incentives to get educated

Customers that are unfamiliar with a product and its risks must be strongly incentivized to get educated. On the other hand, veteran users may not need education. Therefore, the first step is to flag to new customers that there are significant risks that may be encountered.

The critical rule in content is simplicity. Do NOT try to communicate more than three concepts or risks at one time and use simple language. Provide a more complex message in small bites, ideally just in time. Tesla breaks their 28 minutes of video into over a dozen much shorter segments.

Quantify the risk. This quantification should be a probability of occurrence given as a percentage. It is possible to develop quantified estimates in many situations including airline delays and technology failures. For example, one airline examined jet engine mechanical failure records and was able to estimate that 80 percent of engines with a particular set of symptoms would be repaired in two hours vs. a cancelation. This allowed operations to provide the gate agents with rough probabilities. Customers would much rather have a probability than be told, “we have no information.” Rough data is much better than no data.

Illustrate the risk with stories. An insurance company related stories about the higher cost of replacing a kitchen due to inflation and the average uncovered cost if only the current value is insured. Many customers then opted for replacement value at a higher premium.

Provide a high visibility complaint system that communicates, “we can only solve problems we know about.” – Such an aggressive service system will surface two to five times as many issues, allowing faster identification of issues and problem resolution before escalation to regulatory agencies.

1. Identify a set of problems that are preventable with better customer education and transparency

These issues tend to be complexities that lead to mistakes or incorrect expectations. Identify six issues (talking to your front-line CSRs) and pick the two that are most prevalent and which cause both dissatisfaction and extra service workload.

2. Make the case to legal, regulatory, and marketing that unpleasant surprises cost more than transparency over the long run

Marketing will be the strongest opponent, fearing customers will be turned off and won’t buy. Challenge them to do a pilot test that measures problem experience, service workload, and satisfaction and loyalty. The pilot will almost always be successful.

Change the labeling with inexpensive package stickers or modify the online or printed welcome messages for a segment of the customer base. Be sure to designate a control group at least as large as the experimental group. Conduct a follow-up survey of customers after they have used the product to identify problem experience, satisfaction, and willingness to recommend.

4. Change the metrics for success in risk reduction to include market impacts such as loyalty and word of mouth (including social media) as well as claims

Measure the volume as well as the loyalty and WOM impact of issues when the customer was warned in labeling vs. if they are not warned. Ongoing, measure problem experience and overall loyalty and referral rates by problem to identify which three issues should be communicated.

5. Incorporate design for risk into communications, marketing, and sales

Create a process for early identification of customer errors and incorrect expectations in the product design process. Ongoing, educate customers immediately after purchase on how to avoid the three most prevalent issues. Incorporate further possible issues into any quick-start guide. Make phone and web support highly visible.

Every product has risks and unpleasant surprises. Proactively warning customers shows caring and reduces problem experiences. Customers will play by the rules, take responsibility, and accept reasonable risk when told in advance.