A unique idea is a real asset, and startups or small businesses generally put their maximum effort in the best implementation of their ideas. While putting the maximum out of your idea to the customers, you end up with the whopping costs and huge overload of time, which sometimes can be called a blind shot. The market always reserves the top place for the product first introducing the feature, sometimes called as USP, where actually comes the tricky game. The cost and time invested over a particular product always go hand in hand with the tooth-shivering fear of “not so interested” response of customers. 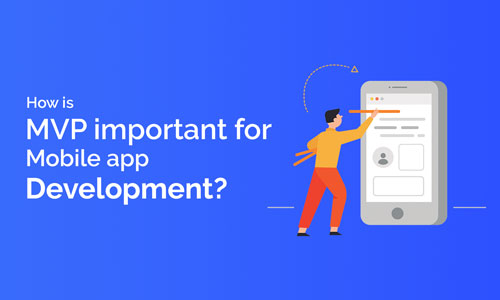 Not only SMEs, but rather huge enterprises also do not overlook this fear. Therefore, relying on no magic wand, MVP is an easy way to have a validated understanding of the consumer behavior about your product, even before it is actually launched into the market. The validated understanding comes in the form of whether a consumer is interested in the product and its functionality. In nutshell, MVP includes the minimum functionality to get your product run in front of your customers and observe their actual behavior.

Among the hundreds of app being launched daily over the app store, most of them come out as nothing more than the mirage. The business of custom mobile app development has recently emerged as the most powerful and innovative field. Once an enterprise put its first step into IT, the idea is the core asset of the whole story being written ahead. The amount of ideas and the app floating around puts the extreme evolutionary peripheries, where the imagination of key apps getting valued a billion
The dollar is imperative to think of.

Validate the concept first: The scope for app development is too huge, where apart from in-house app development; companies are also sponsoring the custom app development. The prevailing competition is the biggest barrier and the reason of app falling down on their faces. Startup and low budget initiatives stay panicked from investing on the implementation of their fantastic brainwave. -Here, it would be a fool’s gamble to put a huge investment over your market perception. So what is the key? Here is where MVP helps in validating your final product, even before it is launched.

Safe track of app development: Demystifying the cloudy image of MVP app is the fact, that the minimum viable app is not the part of an app, but in fact a complete mobile app in itself. No user likes the “under construction” image and leftover production. Therefore, it is an impractical approach to launch a purposeless app. MVP allows the certain level of features to be included in the app, though not the entire list, but at least the core ones. MVP app is a basic yet completed app, which grows stronger with the feedbacks and iterations.

MVP app development path: The most powerful social media platforms and the huge e-commerce websites are built over the years with constant tweaks. Now the mobile app development companies are also looking for MVP to avoid the market mistakes. MVP aids in validating the prototype and puts your powerful idea timely over the market. This, in turn, let you earn the real user experience and guidelines through the feedback that is highly effective in analyzing the design and development. If the user turns toward your prototype and gives the feedback, then you must go with the further releases. As the prototype just contains the basic of your app, design and offers the rapid app development at the reasonable cost, while creating the early user base alongside.

MVP: A deep insight and its benefits

Minimum Viable Product is meant to offer the perfect balance of maximum value to use with minimal design. An MVP product must showcase the core functionality and fulfill the basic purpose. Often minimal development is mistaken with the focus on radical minimalism, which results in the deprivation of its unique selling point. Doing away with the USP may even damage the brand’s image.

The key premise behind the minimum viable product is to add only the essential functions initially and then adding the parts of functionality during the testing as feedbacks start coming in. What a minimum viable product entails, is too subjective, and differs around the industry verticals and competition levels. However, the basic goal is give the immediate value and minimizing the development cost.

Instead of a full-blown and feature heavy product, the MVP allows to test business concept early, gather user information, test hypotheses, launch the product early and keep the cost-effectiveness.

MVP is the installment release of the actual and more complex product. MVP validates the acceptability of the product and creates a clear roadmap to invest. Thus, a strong and viable product becomes a solid base to attract external funding.

Iterative evolution of the product

Launched with the bare functionality to solve the core issues of the user, MVP builds a strong user base. This gives a strong insight into what works and what does not. The vital information gives product team a firm background to make a decision on the further iteration of development for best ROI.

Spreading the cost over several iterations is the best way to run in the right direction. Early launching of the product tends to provide immediate value, and as you gain users and revenue, you can begin investing more.

The key takeaway is that MVP app development entails with smaller start and iterative progress alongside the potential feedbacks. This allows leveraging user intelligence and giving a more polished product. Every version maximizes ROI and results in a more mature application.