There are a lot of programming languages to work on the next Artificial Intelligence (AI) or Machine Learning (ML) project like Java, C#, etc. But among all those programming languages, Python seems to top the list of favorites majorly due to the ease of use with which developers can handle complex coding challenges with Python.

Python is a high level, a robust programming language which has its main focus on rapid application development. Because of its core functionality, Python has become one of the fastest growing programming languages making it the obvious choice for developing applications with machine learning, AI, big data and IoT. 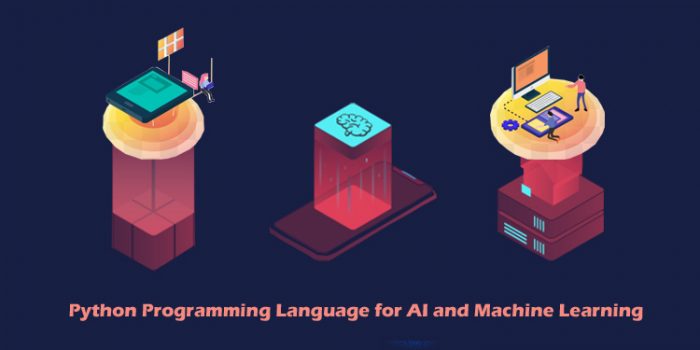 Why Choose Python for AI and ML?

No Elaborate and Unnecessary Codes

Python is all about reducing the number of codes you generally use to execute a function. It focuses on simplifying the codes and makes it easy to read. Add to it a whole lot of complex algorithms on which AI and ML are developed on, the combination of Python with AI will greatly reduce the number of codes the developers have to work on. These coding when used in other languages will be significantly more when compared with the same code executed with Python.

Therefore, reducing the quantity of coding has a lot of positive effects. The developers will need to spend far less time with Python developing AI than with the other languages. Also, the time for debugging will be reduced. When the developers collaborate on an AI or an ML project, it will easier for the new members to easily understand the code and get on the same page fast when it is written with Python. There are far more advantages in the reduction in the number of codes and all this can be achieved when AI and ML algorithms are written with Python.

Flexibility in Coding and Operating Systems

Any application developed should be compatible across multiple operating systems. Python can help in making the same code work across all the operating systems with just minor tweaks. This saves the developer a lot of time from creating separate elaborate codes for every operating system and it also saves a lot of testing and debugging time.
Additionally, Python has made it easier for developers to use the API from an existing program in a different language making it platform independent. One can also link different data structures when working with Python easily making it simple to use for all requirements.

No Dearth of Support

As Python is an open-source programming language, there is an abundance of documentation and information on the usage of the Python. There is a lot of active developer support community online from which one can get their doubts resolved soon and work efficiently.
These resources can be put to use any time a developer gets stuck or need some additional help with an issue and fix the problems immediately.

Dedicated Libraries for Every Need

There are a lot of prebuilt libraries available in Python that can be used for easy coding and customization. These libraries can be specifically used for programming with AI and ML. SimpleAI is a well-tested and documented Python library to develop simple AI algorithms, Numpy is a library used for scientific computations while Scipy is used for advanced computation. There are also other libraries like AIMA, pyDatalog, EasyAI, etc that can be used to code in Python easily.

Similarly, there are also a number of libraries exclusively for Python to work with machine learning. PyBrain is one of the popular ML libraries for Python which is used to test the code across different environments. There are also other dedicated libraries for data analysis like Scikit-learn and MDP-Toolkit.
With such a vast resource of libraries available, it is easy for developers to implement the algorithms in Python in lesser time and with minimum code.

Due to a lot of factors, Python has become a popular choice for developers with experience in Artificial Intelligence and Machine Learning. Even developers new to AI and ML are easily learning the hangs of it when working with Python. In the recent times, it has become easier to find Python developers to work on projects based on AI and ML than with any other programming languages due to the ease of use and the faster coding time. Therefore, considering all these factors, it is best for the developers and the management to work with Python for any future AI or ML projects.

The Yoda way to knock IT backlogs out of the park!