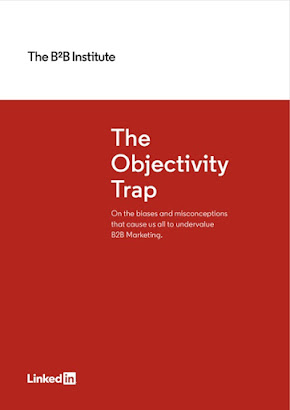 Three topics have dominated much of the conversation in B2B marketing circles over the past few years – technology, data, and content. The explosive proliferation of marketing technologies has been well documented. For example, Scott Brinker’s latest graphic of the marketing technology landscape includes 8,000 martech solutions. “Data analytics” has become one of the hottest buzzwords in marketing, and many companies are investing heavily in marketing analytics capabilities.

Technology, data, and content are all critical components of successful B2B marketing in a world of abundant information and empowered buyers. However, it’s critical to remember that B2B buying decisions are made by human beings, and therefore it’s never been more important for B2B marketers to understand how people make economic decisions and to incorporate psychological principles of human decision-making into their marketing strategy.

The Birth of Behavioral Economics

For decades, most economists have assumed that humans make economic decisions rationally. According to standard economic theory, they weigh the economic costs and benefits of their decisions, have relatively stable preferences, and they usually act to maximize their economic self interest. In the late 1970’s, psychologists Daniel Kahneman (who later won the Nobel Prize for economics) and Amos Tversky began publishing a number of scientific papers that contradicted the rational view of human nature held by mainstream economists.

Kahneman and Tversky’s work pioneered a new discipline that later came to be called behavioral economics. In 2008, two books – Predictably Irrational by Dan Ariely and Nudge by Richard Thaler and Cass Sunstein – raised popular awareness of behavioral economics and put it on the radar screens of business and marketing leaders.

The truth is, marketers have been using principles of behavioral economics for years, albeit largely unwittingly. A 2010 article in McKinsey Quarterly put it this way:  “Long before behavioral economics had a name, marketers were using it. ‘Three for the price of two’ offers and extended-payment layaway plans became widespread because they worked – not because marketers had run scientific studies showing that people prefer a supposedly free incentive to an equivalent price discount or that people often behave irrationally when thinking about future consequences.”

Logic Isn’t Everything
A white paper published this summer by The B2B Institute provides new insights on this topic. The B2B Institute is a think tank funded by LinkedIn that focuses on the future of B2B marketing and decision making. The paper was written by Rory Sutherland, who is the Vice Chairman of Ogilvy and a co-founder of Ogilvy’s behavioral science practice.
The Objectivity Trap lays out Mr. Sutherland’s views on the importance of using principles of the behavioral sciences (behavioral economics, psychology, etc.) in B2B marketing. B2C marketers have long recognized the importance of human psychology, but overall the topic has received less attention in the B2B marketing space. In this paper, Rory Sutherland forcefully argues that behavioral sciences should play a far more prominent role in B2B marketing.
It’s impossible to adequately summarize The Objectivity Trap in a single blog post, but here are three of the paper’s major themes.
Marketing tends to be undervalued in B2B companies because the conventional wisdom is that B2B buying decisions are made on a purely rational basis. In reality, human biases are present in every B2B buying decision, and “collective bias may be far more significant than individual bias.”
Fear of blame is a major driver of business decision making, including B2B buying. “Fear of regret, which drives individual decisions, gives way to fear of blame:  a decision which is easy to defend, or one which delivers small but quantifiable incrementable [sic] improvements, will be preferred to one which overall is better for the health of the organization.” Remember the old saying:  No one ever got fired for buying IBM.
Marketing that focuses exclusively on logic and rationality is not as effective as marketing that leverages both logic and principles of behavioral science. “[Marketing] is a mindset which is essential to understanding and solving certain issues and problems in business which have their origins not in engineering, logistics, or in the world of physics but in the more complex realm of human perception, cognition and in the fields of individual and social behaviour [sic] . . . The problem with logic is that it gets you to the same place as all your competitors.”
The Objectivity Trap contains several important ideas that span many aspects of B2B marketing. I recommend it to all B2B marketers.