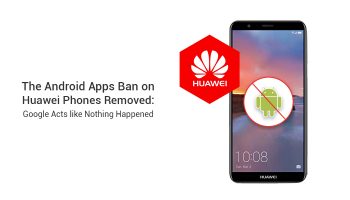 Sometimes in trade, there can be disagreements, which may have a negative impact on the profits of the business. One of the recent trade wars has been between Huawei phones as well as the U.S. commerce department.

What happened in this? The entity list from the Americas department of commerce prohibited the U.S. companies from doing business with the Huawei Company until they got approval from the government. The move was made on 15th May in the bid of controlling the current trade war between America and China. However, daily things have been changing, and currently, the ban has been lifted.

With the ban, Huawei had, now to think of how to hire IOS developer who does not come from the USA. It is because the company used to hire I.O.s developers from the United States in the development of their products. The developers were not to allow Huawei firm to install their apps on their future products. The Android version would now not have apps such as Facebook, Instagram as well as Facebook, which in the previous androids already existed. The ban would not affect the already existing phones having google play. You would still be in a position of installing the apps, updating them as well as using them. The situation would only affect the phones which were already in the factory. It is because, after manufacturing, they would not have any iOS app development agency to help them out.

Most people claimed that the ban had some links with the trade war between America and China. After the ban, the Chinese foreign ministry spokesman argued that the U.S. politicians have been fabricating rumors about Huawei. But if asked for the evidence they were not in a position to produce. It was enough evidence of the prompting opposition from the U.S. After the ban, a 90-day extension was rolled out. The reason for revising the policy temporarily was to impede the unintended consequences to the U.S. firms that had been dealing with the giant Chinese firm.

The ban adversely affected the U.S. Company. Banning such a large global firm from buying the products made in American companies had a negative impact on the companies. If these were to continue the ban for a more extended time, the companies would have experienced more significant losses. Besides that inhibiting the company from doing business with the U.S. technology firms would also have an adverse effect on the small wireless U.S. companies. It is because these firms purchased the equipment from Huawei, where will they now buy their equipment? A study carried out after the ban shown that firms such as the Rural wireless Association would suffer significant losses. They would incur a loss of 800 million dollars as well as 1 billion dollars in the bid of replacing the network equipment that they are currently using. It is because they were sourcing most of their equipment from the giant Chinese technological form.

Immediately after the ban, the first company to comply with the policy was Google. Huawei would now not be in a position of purchasing the needed license to use Google as well as Android services for its future products. Besides that, they would not be in a position to get the google services in future if the situation was not resolved. After Google other firms such as S.D. association which is in charge of memory cards followed.

Lifting of the Ban

However, things are now better to the company after the ban was lifted in this month. The ban not to use the android as well as google play store by the leading iOS development company would be a big blow for the company. They would undergo huge loses, especially on the phones that they were manufacturing. The American president, Trump withdrawn the ban of prohibiting of U.S. technological companies from working with the giant Chinese company, Huawei.

Immediately the ban was retracted Google restored the access of Huawei to androids as well as play store apps. The company can now go on with smartphone manufacturing without fear of where they will hire iOS app developers. Most of the technology companies had been banned from working with Huawei. Other companies that had also been banned by the U.S. government from selling the technological solution to the giant Chinese technological company are such as Intel as well as Qualcomm.

The lifting of the ban was a great relief for the giant Chinese technological company as well as consumers. Trump’s stance on Saturday where he said that the U.S. companies would continue doing business with Huawei brought happiness, not to Huawei Company but also their consumers. The ban that has recently been lifted had not been effective because of the 90-day extension.

Yes, the ban of the technology companies such as Silicon Valley as well as Google has been lifted, and they can now do business with Huawei comfortably. However, 5G technology sale and roll out ban still stand.

In conclusion, the lifting of the ban was a great relief to the giant Chinese company, Huawei as well as U.S. the ban would have brought significant losses to Huawei as well as the small wireless enterprises in America. The U.S. president has already made his remarks that they will continue doing business with Huawei. Hence there is no reason to worry anymore. The wireless enterprises will not have losses of over 1 billion, and Huawei Company will continue to get IOS for its future products. Many people claimed that the ban was due to the trade war between these two superior nations in the globe, China, as well as the USA. If it is true, it should stop, and they should continue with the new move they have taken of going on with their cooperation. It will not only be of benefit to the countries but also the world at large. It is because these technologies are being used all over the world.