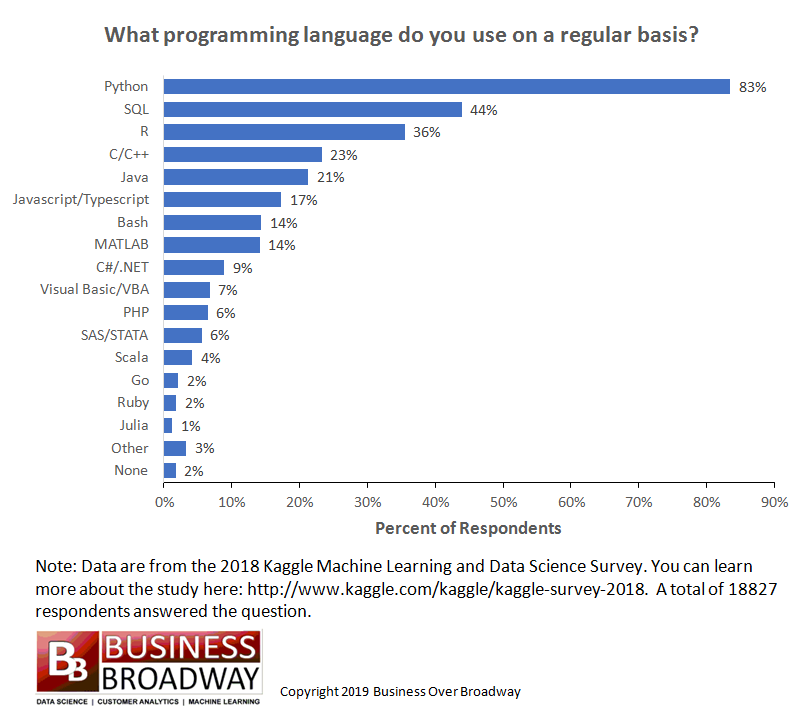 Kaggle conducted a worldwide survey in October 2018 of 23,859 data professionals (2018 Machine Learning and Data Science Survey). Their survey included a variety of questions about data science, machine learning, education and more. Kaggle released the raw survey data and many of their members have analyzed the data (see link above). I will be exploring their survey data over the next couple of months. When I find something interesting, I’ll be sure to post it here on my blog. Today’s post is about the data science and machine learning programming languages data professionals used in 2018.

The survey included a question, “What programming languages do you use on a regular basis? (Select all that apply).” On average, data professionals used 3 (median) languages in 2018. As seen in Figure 1, the top programming language in 2018 was Python (83% of respondents said they used this language), followed by SQL (44%) and R (36%). The top 10 languages are rounded out by C/C++, Java, Javascript/Typescript, Bash, MATLAB, C#/.Net and Visual Basic/BVA. Of the data professionals who identified as a data scientist, 93% used Python, 54% used SQL and 46% used R.

Which Programming Language is Recommended Most?

When looking at data professionals who identified as a data scientist, we find similar recommendations for aspiring data scientists: Python (78%), R (13%) and SQL (5%)