Today’s interview is with Ari Weinzweig, the CEO and co-founding partner of Zingerman’s Community of Businesses, a gourmet food business group headquartered in Ann Arbor, Michigan, USA. Ari was previously on the podcast back in 2020 and is also one of the contributors to Punk XL. Ari joins me today to talk about business visions, visioning, his new pamphlet on visioning (The Story of Visioning at Zingerman’s: Four Visions, Forty Years, and a Positive Look Towards the Future), how many service and experience initiatives lack a clear vision of what it is they are trying to create and why and how this can leads to the higgledy-piggledy services and experiences that we often encounter.

Note: This podcast is the first in a series of contributions (podcast chats, blogs and mixtapes etc) from the contributors to Punk XL that will appear here over the coming months.

This interview follows on from my recent interview – The digitization of the supply chain and it’s impact on customer experience and sustainability – Interview with Sanjay Brahmawar of Software AG – and is number 436 in the series of interviews with authors and business leaders that are doing great things, providing valuable insights, helping businesses innovate and delivering great service and experience to both their customers and their employees.

Here’s the highlights of my chat with Ari: 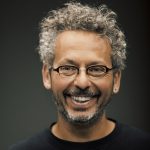 Inc. Magazine described Zingerman’s as the “Coolest Small Company in America”. Meanwhile, they have been featured in the Harvard Business Review and on MSNBC for their business practices and Bo Burlingham in his book, Small Giants, cited Zingerman’s as a model for organizations that define success more creatively than just “getting as big as we can as fast as we can”.

Find out more at Zingermans.com, ZingTrain.com and Zingermanspress.com (You can also find many of the books at Google Books). Finally, say Hi to the folks at Zingerman’s and ZingTrain on Twitter @Zingermans and @ZingTrain and if you want to email Ari directly then his email is: ari at zingermans dot com.

Image by StockSnap from Pixabay