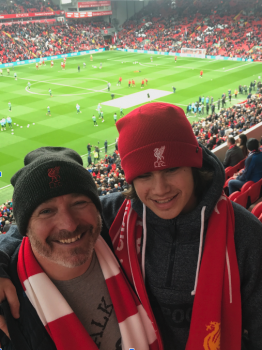 Last weekend I got a chance to visit my happy place, Anfield Stadium, after a long three-year gap. I have been a Liverpool supporter as long as I can remember, and I try to visit Anfield to take in a game once or twice a year, which isn’t easy when you live in San Francisco — especially during Covid times.

Some of my earliest memories involve Liverpool. I remember sneaking out of the house once as a young boy to catch a train to Liverpool to watch an FA Cup semi-final (sorry, mum!). I also remember going to bed in tears when Liverpool lost to Manchester United in the 1977 FA Cup final, and celebrating with joy four days later when we won the European Cup. I have been with them every step of the way ever since, through good times and difficult times.

I am pleased to report that Anfield is as magical as ever. I love sports and stadiums, and I have been lucky enough to attend some incredible events around the world, but I have yet to encounter anything that can rival the atmosphere and raw emotion that this old ground serves up. Liverpool has an amazing team today, and has been one of the world’s greatest teams for the last five years. As a lifelong supporter, I have loved every minute of this period of success, but I have to admit that it was quite unexpected.

As a business leader specifically a customer success leader – I am in awe of what the club has achieved over the last decade. Just ten years ago, Liverpool was in a weak position, close to going into administration, and unable to compete financially with the world’s richest football clubs like Man United, Man City, Chelsea, Real Madrid, Barcelona, Paris, Juventus and Bayern Munich. At a crossroads, they had to find a different way to thrive.

So how did they turn it around to become one of the most successful clubs in football history? Liverpool simply put in place a great game plan, and executed this plan consistently and incredibly well over a number of years. I believe there is much the business world, and in particular the customer success field, can learn from the work they have done and continue to do. Here are four lessons I have borrowed from Liverpool that have helped me tremendously in my professional life:

In 2015, Liverpool hired Jürgen Klopp as its manager and head coach, ushering in a bright new chapter for The Reds. Klopp has proved to be an inspirational appointment, and rightly receives a huge amount of the credit for Liverpool’s success. But like most good leaders will tell you, the club’s wins are down to an incredible cast of supporting characters — in Liverpool’s case, the coaches and players. Under Klopp’s leadership, the team has perfected the art of hiring extraordinary young players and developing and nurturing them. Mohamed Salah, widely recognized as one of the best players in the world, was already an exceptional player when he joined the team, but Liverpool elevated him to world class.

The ability to not only recognize but to develop potential is key to developing a strong customer success team — or any team, for that matter. At Contentsquare, our team is everything. We invest in people, not roles, and we love to see our team members grow and develop their careers within the company. As a leader, nothing is more important than setting up your team for success, supporting them through the challenges and celebrating their wins. We look for talent everywhere and we work hard to foster an environment where every voice and idea is heard, and everyone given the opportunity to make a mark.

Have a clear gameplan and stick to it

On the field, Liverpool has a very strong identity and a very clear way of playing. They play a very explosive, fast-paced, high-press style of football. There are times when they simply overpower their opponents. It doesn’t matter who they play, or what the game is, they are going to play the same formation and bring the same intensity. They play this style at all levels of the club, so when young players step into the first team, they know exactly what is expected from them. This clear gameplan really helps with recruitment too. The club has a very clear blueprint for what kind of players will suit their system of play and thrive at the club.

At Contentsquare we have put in place a very solid customer success team with a robust methodology and playbook that we execute consistently around the globe, with enough space to personalize our support based on the specific needs of Contentsquare customers. There is a standard level of care that every one of our customers experiences — and expects. We hire intelligent, dynamic and customer-first people who can play their respective positions but also be part of something bigger than themselves — the team.

And we do dream big. In fact, Jonathan Cherki, Contentsquare’s CEO and Founder, loves to tell us as often as he can that “where there is a will, there is a way.” It reminds me of Klopp’s motivational speech to the players ahead of the Champions League semi-final in 2019, when Liverpool were contemplating a tricky game against Barcelona after losing the first leg 3-0. Klopp told the team that the game was almost impossible, but because they were an amazing team they should believe they can do it, and they did, winning 4-0.

Have a clear gameplan off the field

Liverpool has developed and implemented a clear business-oriented game plan for the football club. The club is run in a sustainable way and is very much focused on making decisions that ensure the long term wellbeing of the club. It has done a great job of growing revenues and then operating within their financial reality. It has expanded and improved the stadium to improve matchday revenues and have worked hard to improve sponsorship revenues, which allows the team to acquire excellent young players with lots of potential that still have the best part of their career ahead of them.

Contentsquare also has a very clear gameplan, and a vision that stretches far into the future. Like Liverpool, we have tremendous ambition and we’re building something that is meant to last. Our customer success team is at the heart of this vision and is a key business differentiator, giving our customers industry-best support from day one.

As the company has matured, we’ve also been considering what success looks like beyond revenue, and focusing on what kind of impact we can have in our field and beyond. A few months ago we hired our first Chief Impact Officer, Kat Borlongan, to explore how Contentsquare can also drive social and environmental impact.

And we’re all in it together. Beyond the scope of our individual roles, we all get to own and contribute to this larger mission, and that’s what creates the team spirit that drives all of our company values.

Two key ingredients in Liverpool’s development over this period have been the warmth and togetherness of the club. Former Liverpool manager Bill Shankly spoke of the Holy Trinity — the alignment of management, players and supporters.You only have to watch one game to see and feel this togetherness. In a world where professional sports are often characterized by a “winning is everything” mentality, Liverpool has made professional football more human. The bond between players and coaches is very apparent (Klopp’s on and off the field hugs are legendary), and the players clearly love being at the club and playing for the team. It has reached the point where great players are attracted to the club to share in the magic.

Nothing exemplifies this spirit more than the club’s anthem, You’ll Never Walk Alone. It’s a song we (the fans!) sing during and after the game, when we’re winning and during the hard times, too. That’s the beauty of togetherness — it makes the good times seem that much sweeter because you have people to share them with, and the difficult moments that much easier to get through.

As we have built Contentsquare and the customer success team, we’ve worked hard to create a great culture for the team. There is genuine warmth within the organization. Team members feel the togetherness, and that they have a place where they can do their best work. We take the time to celebrate each other’s successes and achievements but we also rally together to solve problems and improve things that need improving.

The ingredients of Liverpool’s success have created an amazing brand for the club and the team, which in turn fuels the next phase of development. The team has done a great job of remaining humble and is always looking to improve and stay hungry for the next challenge.

When I look at Contentsquare and its customer success team, we are actively trying to adopt many of these same principles. We have a very clear business strategy that is heavily focused on the human element — from helping our clients build a more human digital world to creating a work environment that is people-first. We have a clear business model where customer success is a key ingredient in our growth and development and is very much part of our secret sauce. It is also what makes Contentsquare unique.

This game plan is helping us to develop an incredible brand, deliver real value for our customers and drive great business results. We are committed to remaining humble and hungry, and more importantly, we are always striving to improve our game. YNWA!