In 2015 it was called “The Age of the Empowered Customer,” now 2016 is deemed “The Year of the Customer”, and it’s safe to say consumers’ assumption of control in future of retail will only grow from here. Consumer demands for mobile optimization, personalized content, and seamless offline/online integration are constantly on the radar of retailers looking for a competitive edge, and now consumer reviews are proving to be another critical factor that can set retailers apart.

What’s the importance of reviews?

A study by Yes Lifecycle Marketing found that 51% of retailers state differentiating their brand and experiences against competitors to be their biggest challenge (second only to “Identifying and engaging our most valuable customers” at 52%). For today’s informed consumer, who conducts their own research before making a purchase, reviews are often the tipping point of making a decision in cases where there’s little perceived product differentiation. Dimensional Research found that 90% of respondents who recall reading online reviews were influenced by the reviews in their buying decision; conversely 86% were deterred by negative online reviews.

The practice of checking reviews before making a purchase is becoming more and more common. A recent study by BazzarVoice found that 54% of e-commerce shoppers read reviews before making a purchase, and 39% of in-store consumers still check reviews online before making their decision. Even more substantial is that the study found that for every $1 that’s influenced by an online review, the impact is multiplied 4-5x’s for instore revenue (read more about the findings here). 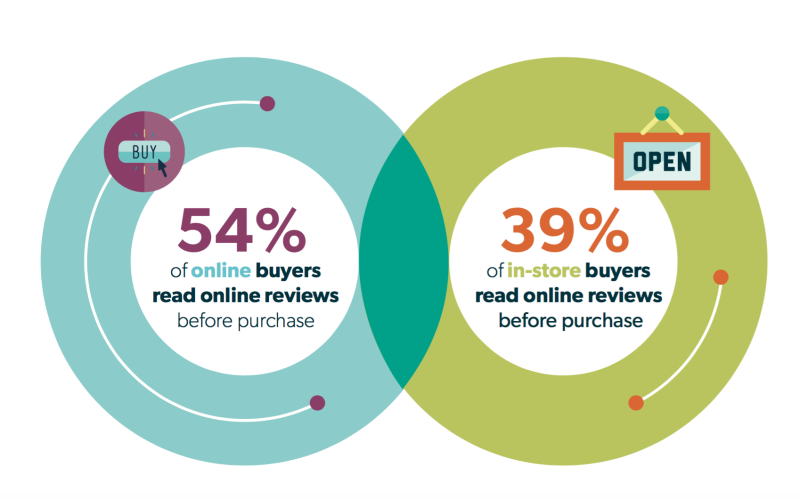 How to Encourage Customers to Leave Reviews

The irony in reviews is that in some cases having no reviews can be worse than having bad reviews, especially for more modern consumers. According to PowerReviews, 70% of mobile shoppers are more likely to purchase a product if the retailer’s mobile site or app offers reviews. Offering incentives such as loyalty points, discounts on future purchases, and complimentary items are commonplace in garnering reviews.

It’s also important to make leaving a review as easy as possible. Make sure your review links are clearly posted on your website, and that whatever type of form or input method you’re using is optimized for mobile devices. Follow up emails are another good way to encourage reviews, as the more time that passes after a transaction the chances of a consumer leaving a review decreases.

What to Do About Negative Reviews

While they can be frustrating, negative reviews in a sense are not all bad. For one thing they can highlight deficiencies in your products or services that you never would have noticed before. They can also build your brand’s authenticity by showing consumers that they can trust your positive reviews, because you allow your customers to voice both sides of their experiences. They can also manage consumer expectations. For example a review about a dress that complains “size was smaller than expected” can educate a future customer to purchase a larger size than they would have originally.

Regardless if a negative review is constructive criticism or outrage, it’s imperative to respond – and quickly. The suggested timeline of how quickly a review should receive response varies by the platform it’s initiated on, but across the board most experts suggest responding in less than 24 hours. If a complaint is lodged on a social platform such a Twitter, which is known for its rapid fire nature, it should ideally be addressed in under an hour.

In order to craft a positive consumer experience paying attention to reviews is essential. And don’t forget that not all reviews are posted on your website. It’s critical to pay attention to the social conversations that are taking place about your products and brand- they can give you valuable insight on what to change (or keep doing) in order to keep your customers satisfied.