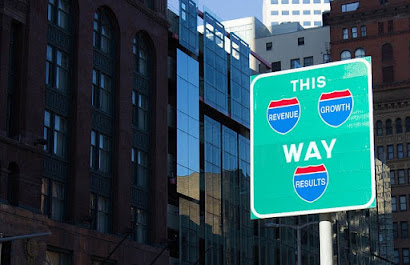 In late February of this year, an article at the Harvard Business Review website made the provocative claim that the importance of chief marketing officers in larger companies had declined over the past two decades. Normally, this article would have generated a lively conversation in the marketing community. But within a couple of weeks after the article was published, marketers across the United States were completely focused on the COVID-19 pandemic.

The article’s conclusion was based on an analysis of the compensation paid to the senior leaders of large companies between 1999 and 2017. The research identified the five highest paid executives of companies included in the S&P 500, S&P 400 MidCap, and S&P SmallCap 600 indexes. The authors used four job classifications in their analysis – marketing, technology, operations, and finance.

This analysis found that the number of CMOs who were among the five highest paid executives declined about 35% between 1999 and 2017. The authors contended that the results of their research supported their assessment in an earlier HBR article that “marketing as a function is less valued today than it once was.”

The conclusion contained in the HBR article stands in stark contrast with the prevailing view in the marketing community that the scope of marketing’s responsibilities has expanded in recent years. But the article does raise an issue that should be concerning to CMOs and other senior marketing leaders.

Over the past several years, an increasing number of companies have appointed “chief revenue officers” or “chief growth officers.” Some of these companies never had a CMO, while others created the new position to replace the CMO role. These organizational changes suggest that a growing number of CEOs and other senior business leaders don’t believe their marketing function – and by extension the CMO – is maximizing growth opportunities.

Marketing communications are certainly important, but leading marketing academics have long recognized that the marketing function has (or should have) other critical responsibilities. In the late 1940’s, Neil H. Borden created a model of the “marketing mix” that included 12 distinct ingredients – product planning, pricing, branding, distribution channels, personal selling, advertising, promotion, packaging, display, servicing, physical handling, and fact finding and analysis. In his 1960 marketing textbook, E. Jerome McCarthy grouped these ingredients into the four categories that we know today as the 4P’s of marketing – product, price, place, and promotion.

So marketing has long had a mandate that is broader than marketing communications. Unfortunately, many of these broader responsibilities have, over time, been transferred to other business functions, often with the acquiescence of marketing leaders. As a result, it’s hard to argue that the influence of marketing has not been diminished. Recent research supports this view.

The February 2020 edition of The CMO Survey provides detailed information regarding the current scope of marketing’s responsibilities. This survey generated a total of 265 responses from senior marketing leaders at U.S. companies, 65.6% of whom were affiliated with B2B companies. The detailed survey report makes it possible to isolate the responses from B2B marketers, and the following discussion is based on those responses. 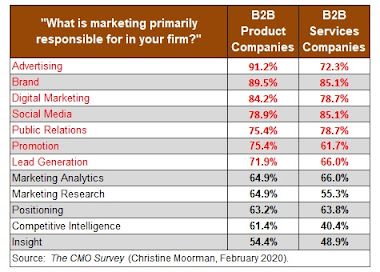 What activities didn’t make the 50% cut? Those are shown in the following table. 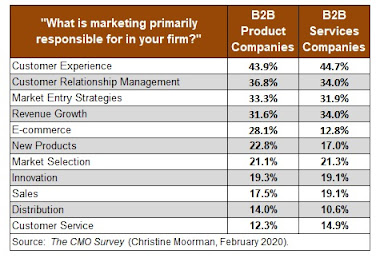 These survey findings suggest that marketing’s scope of responsibilities has not expanded much beyond marketing communications activities in most B2B companies. Seven of the 12 activities in the first table (shown in red) are centered primarily around communications. Also note that 3 of the 4P’s – product, price, and place (distribution) – are completely absent from the first table.

If the importance of CMOs is declining, perhaps it’s because most CMOs are actually CMCOs – chief marketing communications officers.

Use B2B Buyer Personas to Gain Consensus on Objectives

Building Security into Your Company Culture Can Improve CX