There is an interesting struggle going on out there among the zeros and the ones. It’s a race, not unlike the one we read about in “Aesop’s Fables” as children, the one between the tortoise and the hare. You’ll remember the hare, overconfident and careless, dashes out and then slumbers, eventually losing to the ever-steady, vigilant, progress-based tortoise. The hare would come to lament, “Don’t brag about your lightning pace, for slow and steady won the race.”

Since late 2015, there’s been a lot of flash about chatbots — automated text-based virtual assistants. Murray Newlands of chattypeople.com insists through “instantaneous, personalized customer response” chatbots have “revolutionized the customer service space.” The great hope, of course, has been that they would replace human agents in call centers.

But all the hype never materialized. Front-end chatbots suffer two critical flaws when doing the customer support (CS) work of humans: they lack empathy and they can’t problem-solve. They are losing in the race for leading automated support because to date they haven’t yet “learned” how to augment the support experience.

Most chatbots are in no way what we consider intelligent because they’re based on decision-tree logic. 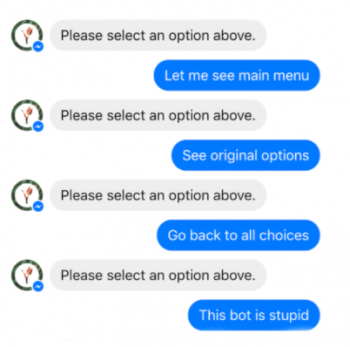 In this, any response given by the chatbot is dependent on keywords in the end user’s input, which is limited by how well the programmer predicted the range of user scenarios. And, like anything developed by humans, there can be inherent flaws in logic. Thus, the example shown here.

Spoiler alert: the next gen of chatbot is coming.

The Failure of Chatbots (Thus Far)

Let’s begin by pointing to one of the biggest chatbots that didn’t cut the mustard. Facebook Messenger’s M was shut down on January 19, 2018, because it failed to reach beyond minimal automation. M required a considerable human workforce to maintain and manage it — which doesn’t line up with most people’s perception of what a bot should be capable of. Besides, a fully automated M would never have understood the subtleties of natural language, and the static content that was used to develop the bot could only take it so far. But, it was not a total loss for Facebook. M revealed an important lesson: Artificial intelligence (AI) and Machine Learning (ML) with natural language and conversation is the right development direction and the key to customer service and support for the future.

After all, the most compelling thing about AI is that the machine “learns” as it gathers more and more data until it eventually solves problems on its own. Without improved natural language abilities and the capability to problem solve, front-end, rules-based chatbots will never win the prize for fully automated CS. But, much like the patient, stalwart tortoise, chatbots have been on an ascending developmental trajectory and the full potential is only beginning to come to fruition.

The Evolution That Awaits

By 2020, 85% of all customer interactions will be automated thanks to AI. One major benefit is that AI can reduce end user abandonment rates (which are rising) by predicting and preventing support issues. However, AI can’t do it alone. The best CS solution is a blended one where AI handles lower-level support requests and human agents focus on more complex and sophisticated tasks.

The primary reason chatbots never took off is because early adopters were expecting too much from the young technology. Chatbots weren’t designed to easily integrate with existing business systems and were often stymied by their very own programming parameters. Some reasons why first-to-market solutions didn’t work out, follow.

The vast majority of chatbots aren’t actually intelligent. As we mentioned above, they are built based on a decision-tree logic, where the response given by the bot depends on specific keywords identified in the user’s input. Decision-tree bots are as intelligent as the designer/programmer who created it to anticipate all potential use cases and inputs. And, bots with linguistic and natural language learning capabilities haven’t yet been introduced.

Use cases aren’t that strong. What we are seeing now is a rush of companies trying to be the first in their category to successfully deploy a bot. In that process, we see a plethora of bots that are solving for irrelevant use cases or that offer really poor experiences. Taking the time to get it right will actually win the proverbial race.

Transparency has been lacking. The most successful bots out there make one thing clear from the very beginning of the experience: that the user is chatting with a robot, not with another human. Setting up the right expectations upfront will make users more forgiving about certain mistakes the bot might make. 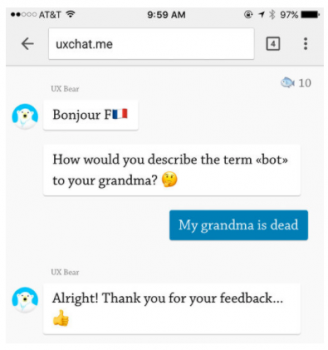 They don’t understand context. Bots are unable to sustain contextual information for longer than a few chat bubbles and will end up losing track of what the user was saying before they posed the question. And, when the bot fails, there is no seamless handoff to an agent (outlining the context of the exchange) to support any attempt to save the situation. The ball gets dropped.

But, the immediate future is looking brighter! Bots that pull from content repositories and augment actual agent interactions promise realistic return on investments and actionable solutions:

Refines what human agents are doing: Automation through AI can relieve staff of mundane CS tasks, doing so 24 hours a day, and with a consistent voice.

Provides crucial personalization: We know personalization in customer engagement is now in high demand — essentially presenting as the key to customer satisfaction. AI can provide this solution.

In summary, this is obviously an incredibly interesting concept to keep up with. Follow me on social channels to learn more on this and other trending topics in the AI space.