A global company recently engaged the Strategyn team to help it segment a core market in a new way. The company, a recognized leader in the space, came to us with a hypothesis: they believed their demographic/psychographic/attitudinal-based segmentation model was faulty and wanted to apply an outcome-based (needs-based) segmentation model instead.

They believed their segmentation model was faulty because customers from each of the targeted segments purchased a mix of their products—in other words, their products were not differentiated to address any unique unmet needs in any segment. Consequently, they were struggling to differentiate their offerings within these segments and were being forced to compete on price.

We took the following steps to employ an outcome-based segmentation process, a methodology Strategyn pioneered:

The segmentation analysis revealed 3 unique segments of customers as shown in the opportunity landscape below: 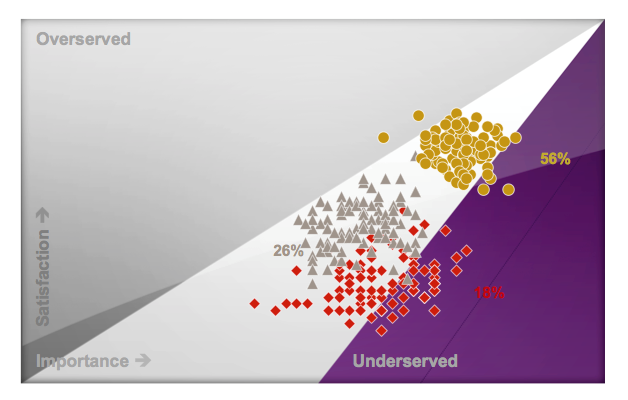 The first thing the landscape told us is that no segment of the customer population was overserved. This means that a Disruptive Strategy would not be fitting in this market as no segment would want a solution that gets the job done worse for a lower price (see the Jobs-to-be-Done Growth Strategy Matrix). Not all markets are threatened by disruption. This market was one of them.

Finding the Hidden Segment of Opportunity

The opportunity landscape revealed two segments that were appropriately served and one segment that was underserved.

The “gold circle” segment (56% of the sample population) was comprised of customers who purchased the most advanced product offerings. Our client had significant market share (about 50%) in this segment and one product offering in particular fit perfectly to address the needs of customers in this segment. In reviewing the existing marketing literature for this product, however, we noticed that the value proposition was misaligned—in fact it aligned more with the needs of customers in the underserved segment. This was causing confusion. We made recommendations that would correct this misalignment and ensure the value proposition would resonate with customers in the target segment. We also recommended a few product improvements to address the unmet outcomes that existed in the segment.

The “gray triangle” segment (26% of the sample population) was comprised of customers who had a different need priority—needs that were satisfied by another product offered by our client. Again, our client had significant market share in the segment. The recommendation we made here was to fine-tune the value proposition and align it with the customer’s needs in the segment.

The “red diamond” segment turned out to be the hidden segment of opportunity. This segment (18% of the sample population) was very underserved and our client’s market share in this segment was in the single digits, a fraction of the share it had in the other 2 segments. The segmentation model revealed a distinct hole in the company’s product line.

While this segment was underserved it was NOT willing to pay more to get the job done better. This meant they wanted to get the job done better and more cheaply, a situation in which only a Dominant Strategy would work (see the matrix referenced above). The segment went undetected because it didn’t fit the traditional profile. Users wanted improvements in the product’s basic function but fewer bells and whistles demanded by users in other segments.

This hidden segment represented a $150M opportunity assuming the company could create a product for this segment that would enable it to achieve the same market share it enjoyed in the other 2 segments. Filling this hole in the product line represented a major opportunity for the company. All that was needed was a stripped down version of the high-end product — a product that offered more of the desired basic function, but with other features that were unnecessary. Creating this product became the company’s number one priority.

Outcome-based segmentation has been the key to success in opportunity identification in many markets we have analyzed. Success in innovation is often dependent on discovering a segment of customers with unmet needs.