Why is it so hard to get CX initiatives funded?

Bob Thompson, CEO of CustomerThink.com, recently related to me that his conversations with customer experience (CX) execs are rife with concerns about the lack of genuine top management support and unwillingness to fund CX initiatives. Why is this commitment so hard to earn from management?

Why Top Management Fails to Support Investment in CX

Customers with serious problems do not complain 50-90 percent of the time. Even in Business to Business (B2B) markets, the noncomplaining tip of the iceberg can be 75 to 90 percent. Top management believes, incorrectly, that “no news is good news.”[1]

Problems cause a severe negative impact on loyalty and sensitivity to price. On average, a serious problem decreases loyalty by 20 percent and doubles price sensitivity. You cannot charge a premium for a product that causes problems.

More than a third of customers fail to read directions or even contracts, thereby leading to many preventable unpleasant surprises. This is not just consumers – I recently polled 250 CEOs of small to medium companies (10-100MM) and a third said their business customers failed to read contracts and misunderstand at least some critical parts of the relationship.

Problems and poor service foster negative word of mouth (WOM). The CCMC 2020 National Rage Study found that three times as many people hear about a bad experience than a good one.[2] WOM is a major source of new customers and in B2B it is the primary source.

Executives do not have a handle on key parameters of their business.

About half of all customer attrition is caused by problems and how the problems are handled, or not handled if the customer does not complain. While the Sales Department often reports the contract was lost due to price, the actual reason may be that, for the price being paid, the customer judged the performance and service as unsatisfactory. In many companies, executives do not even have a good handle on what their customer attrition is, let alone the causes. In many other companies, attrition is viewed as inevitable – sales will just generate new customers.

This situation is illustrated by the leaky bucket – attrition leaks customers out of the bottom while sales works hard to add new customers at the top. 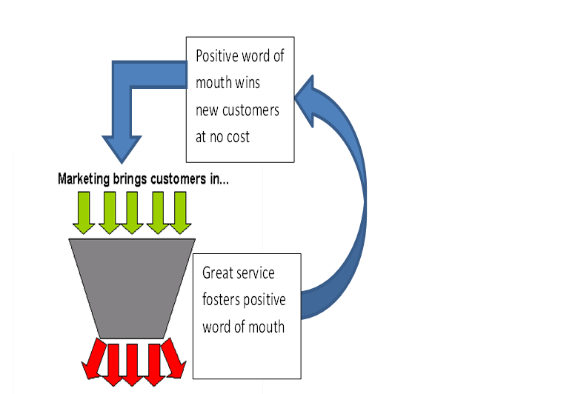 Think of the implication of cutting attrition in half while continuing to generate new customers at the same rate. In most companies, that would imply incremental annual growth of at least 10-15 percent.

A great experience is the cheapest source of new customers but less than a quarter of executives I query can tell me the percentage of customers gained through WOM referrals. The president of the Cheesecake Factory related that their marketing expense was one-fourth that of their competitors because of great positive WOM. Service and CX are WOM management mechanisms.

In many companies, executives cannot even quantify the marketing/sales cost to acquire a new customer. Our original White House Study in the 1980s quantified that it costs five times as much to win a new customer as to keep an existing one.[3] That rule still applies, though the ratio is even greater for B2B environments.

Executives are reticent to take any investment on faith and want to directly connect revenue with actions. However, the return on investment from loyal customers comes from future revenue. At the same time, even though the source of sales is hard to attribute, the Sales Department always claims credit, even though most salespeople are order takers.

Most finance executives do not believe promised returns are due to loyalty or word of mouth and require up-front proof. These executives must be educated on the above customer behavior as well as on the lifetime value of a customer (LVC), which inherently incorporates the longer time-horizon required to justify CX investment. Two approaches can be used to gain acceptance of LVC and the support of the Chief Financial Officer (CFO). First, use a painfully conservative LVC – ask what the CFO would think is reasonable and reduce that number by 20 percent. Second, promise to rigorously verify the CX initiative’s impact on sales. At a major US airline, we tracked 8,000 frequent flyer accounts for 18 months to demonstrate that when the customers had fewer problems, loyalty was 50 percent higher. The CFO became an advocate.

Top management is afraid of failure and unwilling to take any major risk.

Executives are afraid of failure and bad news. Identifying causes of attrition and lost sales is not fun. Bad news is viewed as negative. Highlighting dissatisfied customers must be recast as identifying an opportunity to enhance profits by retaining customers, reducing attrition, and enhancing positive WOM. [4] There must be an acceptance that not all experiments succeed. In his shareholder letter of 2018, Jeff Bezos stated, “As a company grows, everything needs to scale, including the size of your failed experiments. If the size of your failures is not growing, you are not going to be inventing at a size that will actually move the needle.”[5]

1. Educate executives on customer behavior and its impact on loyalty using survey results and stories/testimonials from actual customers.

Quantify the percentage of customers who are dissatisfied and estimate the revenue associated with those customers. Tie this customer data to executives’ own experience. Ask the skeptical executive to recount his behavior the last time he encountered bad service. When I asked the skeptical CFO of a major Japanese electronics firm about his happiness with his car dealer, he expressed anger at their poor service. I then asked about his complaint behavior (he had not complained), loyalty and WOM actions and, suddenly, he recognized and understood the customer behavior I was describing. He became a solid advocate.

2. Create a status quo business case based on your company’s attrition, loyalty, and WOM parameters using industry behavioral data where your own data is lacking.

Ideally, connect dissatisfaction with granular points of pain so you can rank order the biggest opportunities by both frequency and damage per occurrence. Be sure to vet the numbers with Finance and Marketing in advance. Use a painfully conservative estimate of the LVC so that when the business case is presented, the CFO’s only criticism will be that your value for LVC is too low and your business case is too conservative. Show how much revenue is being left on the table through accepting existing levels of attrition. Make the point that 50 percent of the attrition can be prevented by creating a better customer experience. This will convince the rest of top management that you have a valid business case.

3. Work with the Quality/Performance Improvement function to execute rapid experiments focused on two or three of the most obvious customer points of pain that cause attrition.

Use careful measurement and, where possible conduct A/B tests to increase credibility. Amazon does over 10,000 A/B experiments per year.[6] Reposition pilot tests and experiments as a learning activity where lessons are learned from failures.

The following is a case study of major electronics manufacturing company where these actions resulted in a strong, ongoing commitment to CX.

The company had faced static NPS scores with declines in market share in several areas. Complaint data and surveys showed that the company was difficult to do business with. However, the company was very profitable and a market leader in many of its industry segments. The new CX position was created in the division serving small and medium businesses. She was able to demonstrate that the NPS of 26 meant that 22 percent of customers were very dissatisfied detractors – based on the calculation of 48 percent promoters and passives 30 percent which left 22 percent as detractors. This 22 percent was close to the percentage of customers who failed to purchase a second time. She suggested that if only half of the attrition could be eliminated via better service, divisional revenue could be increased by at least ten if not 20 percent. She received the mandate to execute a points-of-pain survey and to fix the top three POP, as long as major capital or IT investment was not needed.

Using a granular points-of-pain survey, the CX VP found that over 60 percent of customers had problems and about 20 percent would not recommend the company and 30 percent ambivalent; exactly in line with the NPS survey. Further, 17 percent of total revenue was at risk due to five points of pain, the largest of which was difficulty in getting a price quote promptly. Delayed quotes led customers to move to the next supplier and not return for future quotes. Other POP included stale website information, failure to communicate shipment status when delays occurred, and non-empowered service reps.

Parallel to the POP study, an employee frustration survey of front-line service and sales employees mirrored the same POP. One question asked was how much time is wasted each time the problem occurred suggesting that over 20 FTEs (costing well over $1mm) of employee time was wasted chasing down quotes and permission to act from other departments.[7] Between the tens of millions in lost revenue and the $1+ MM in wasted time, management gave the CX VP a mandate to make significant investments in dealing with the POPs.

Delayed quotes and front-line empowerment required little in way of resources, just creating internal service agreements and clearer direction supported by multiple departments. A workgroup attacked the stale data on the website, focusing on the most popular products first. Proactive communication of delayed production and shipments was initiated focusing on the most important customers first, though more IT investment is needed.

The result has been an increase in sales of $40MM and a double-digit increase in customer satisfaction. Management is now convinced and has initiated POP studies in 9 other divisions covering over $10BB in sales. The Divisional CX executive has now been elevated to the Corporate level reporting to the COO of the entire enterprise. She is now also in charge of the entire Voice of the Customer process.

The best way to gain executive commitment is to appeal to greed. Show them how much money they are leaving on the table with mediocre CX. Use whatever data you have to estimate the percentage of unhappy customers and calculate the revenue they represent. Combine that data with extant attrition rates to show that at least half of that money could be recouped if a few key points of pain are eliminated. Compare the cost of addressing the POP to the cost of acquiring the same number of new customers. In almost every case, the cost of winning new customers is 5-10 times as much as fixing problems to keep the same number of customers.