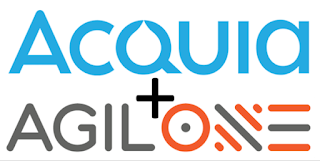 Acquia, which is moving past its roots in Web content management to become a multi-channel “digital experience platform” (DXP), took a big step in that direction today with a deal
to buy the AgilOne Customer Data Platform. The deal follows Acquia’s May 2019 purchase of open source marketing automation platform Mautic  and September 2019 purchase of site building tool Cohesion.  Acquia itself was purchased in September by Vista Equity Partners  for $1 billion, which obviously supports their DXP strategy.

The logic behind this deal is so clear that there’s little need for comment. While the exact meaning of DXP is a bit fuzzy, it surely involves coordinating and personalizing customer experiences across channels. This certainly requires the unified customer data that a CDP provides.  Acquia’s heritage in Web content management doesn’t provide deep customer data unification experience, and neither does Mautic.  AgilOne is a particularly good fit because it’s better than many CDPs at identity matching, including offline as well as online data. It also provides lots of connectors to source and delivery systems, as well as advanced machine learning for segmentation and predictions. Acquia and Mautic lacked those, too.

AgilOne rebuilt its core technology fairly recently, giving it a highly flexible and scalable platform that should easily extend beyond the company’s current base in mid-tier retail.  In particular, it will be able to serve Acquia’s clients, who tend to be very large companies with multiple Web multi-sites around the world. At the same time, AgilOne gives Acquia a stronger story in retail and other B2C markets where it has been less active.  AgilOne will also gain by integrating with some of Mautic’s features, notably email and SMS delivery and complex customer journey management. And the deal gives AgilOne much deeper resources to fund growth than it had as an independent company.

What, if anything, does the deal tell us about the larger CDP industry? I’d argue it mostly reinforces the trends I described in October, of independent CDPs being purchased by companies that are not primarily marketing software vendors but need to add customer data capabilities. Nearly all major CDP purchases to date meet this description: Mastercard buying SessionM, Dun & Bradstreet buying Lattice Engines, Arm buying Treasure Data, and Informatica buying Allsight. The only partial exception is Salesforce buying Datorama, but CDP wasn’t the focus of that deal. None of the other companies trying to follow Acquia’s approach of expanding from Web content management to DXP has yet purchased a CDP. But they’ll all need CDP functions so don’t be surprised to see more deals along those lines.

Put in a broader context, adding a CDP as a module inside a DXP is an example of CDP as a component within large marketing or even operational systems, something I refer to as “CDP Inside”. I expect that to be increasingly common and, thus, a potential home for independent CDP systems as the market matures, competition heats up, and the big marketing cloud vendors release their own products.  Selling or merging to become part of a larger system is one escape path for the independent CDPs. Another path is to focus on specific industries or cost-sensitive segments where the big marketing clouds are at a disadvantage.  I expect to see current CDP vendors take both approaches, even as new entrants continue to appear.  The CDP market won’t get any simpler but buyers should have increasingly clear choices, so buying a CDP may become a bit less complicated.