Everyone knows that Python is the best programming language to use when creating an application from scratch. It effectively eliminates the struggle otherwise associated with complicated syntax or debugging tools. Using Python for startups, you can build websites & mobile apps quickly & easily.

Statista says that Python has worldwide popularity of 48.24% as of 2021. It lies third in the list of most used programming languages worldwide. 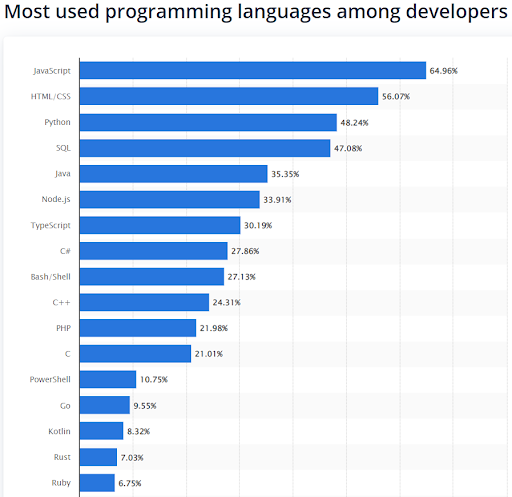 Some of the world’s most successful technology companies, including Google and Yahoo!, choose Python as their default programming language. However, it is not a language limited to unicorns. It is a proven vital option for startups and entrepreneurs too.

Here are the Top 8 Reasons that Make Python a Brilliant Choice for Entrepreneurs and Startups:

Let’s explore them in detail.

When startups use Python, there’s no need to pay licensing fees. Also, when all your code lives in one place and has a single source of truth, it can become easier to keep track of any changes or updates. Moreover, it makes it easier to see just how dependent you are on third-party libraries and if there are terrific alternatives out there that you could use instead.

It is a perfect way to start keeping track of what sort of external dependencies your business needs from day one. Python for startups proves extremely useful as your product matures and more and more contributors be they employees or open-source developers come on board

As you look at which programming language will make it easier to get a web application off the ground, your concern shouldn’t just be how long it will take to get something up and running? You should also be looking at what sorts of costs you might have associated with development.

The table below offers greater insights into Python developers charges across the top outsourcing nations worldwide: 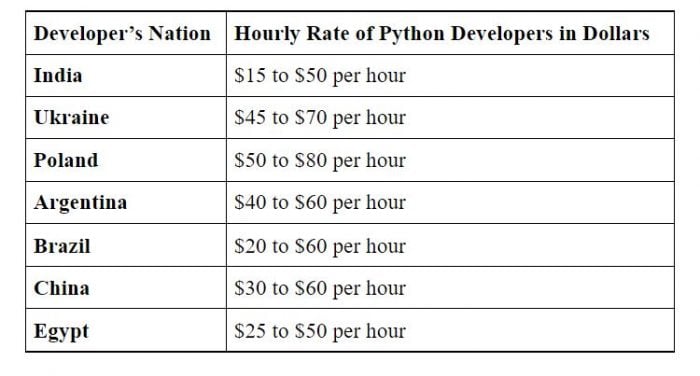 Being a general-purpose language, Python easily supports libraries and modules that make the development process more manageable. Multiple platforms like Google App Engine, Heroku, and Django use Python as their base programming language. You can use it to develop websites and mobile applications too.

All in all, Python has both strong support from the community and support from online tools (the libraries) itself. So if you’re planning to start your project, it’s worth considering using Python for startups because of its strength. Django framework, in particular, is one of the best frameworks available out there in Python to create a web application.

Even if you use a complete Python IDE, you still need to be disciplined about your coding practices. Namely, that means getting into a routine of testing (with unit tests and actual world tests), writing comments where you need them, and following clean-code principles.

These best practices are what will save your butt when things get tough—which they will! Mastering these habits now ensures that in four years when you’re working on your next startup, things will go smoother than ever before. Alternatively, you can hire python developers for your project.

Building an MVP in Python takes just a few days and, at times, can be completed in as less as 24 hours. The reason behind such speed is that you are using built-in libraries and frameworks while writing code. It reduces time wastage on development, accelerating your app or website project speed and completion.

With Python, you have many pre-built libraries facilitating an enhanced development process. A rich set of frameworks and libraries available in Python gives you complete freedom to choose according to your requirements without any hassle. So, whether it’s web scraping or machine learning, or even data analysis, you name it!

Python also offers code reusability, thereby facilitating a quick pace. It is more efficient than other languages because it allows developers to build small programs that perform many functions simultaneously.

In other words, if you have developed a program, you could use it again by modifying or just adding small lines of code to your new project. Because of this feature of python development, companies prefer Python.

It allows them not to write unique codes whenever they develop something new. Instead, they need to add or modify a few lines of existing code that have already been generated before.

Scalability- Offering Uninhibited Growth with an Ever-Increasing Client Base

If your startup intends to go global, you need a language that provides maximum flexibility, scalability, and control to keep up with fast-paced growth. Python supports multiple platforms such as Linux, Windows, Mac OS X, and even mobile applications as a strong object-oriented programming language.

With Python libraries like Twisted and Pyramid, you can achieve professional results in web application development by reusing as much code as possible. This way, your codebase remains small but performs at an enterprise level!

When coupled with powerful third-party frameworks like AngularJS, Node.js, etc., Python for startups has become a versatile choice for building large & complex apps.

Data security has always been a vital concern for startups. No one wants to lose clients’ data or trade secrets and damage their reputation. To avoid these situations, companies often turn to coding languages that come with built-in security measures, like Python.

Using such a programming language makes it easier to fix bugs or add new features to your existing applications without adding additional code lines. More importantly, you will have better control over your application architecture because of its high flexibility and dynamic nature.

Python’s structure and syntax have been inspired by significant languages like C++, Java, and Perl. It makes it an apt choice for startups looking to hire teams fluent in these more common languages.

It is also easier to transfer your website from other technology stacks to Python. Thus, businesses can expect a considerable talent pool with varied experience when hiring a team of coders who know python programming.

As discussed earlier, Statista ranks Python as #3rd on their list of most popular programming languages in 2021 because of its rise in popularity over time. Some of the global brands that trusts Python includes the following:

And many more. Do you know the standard charges of developing an application using Python? 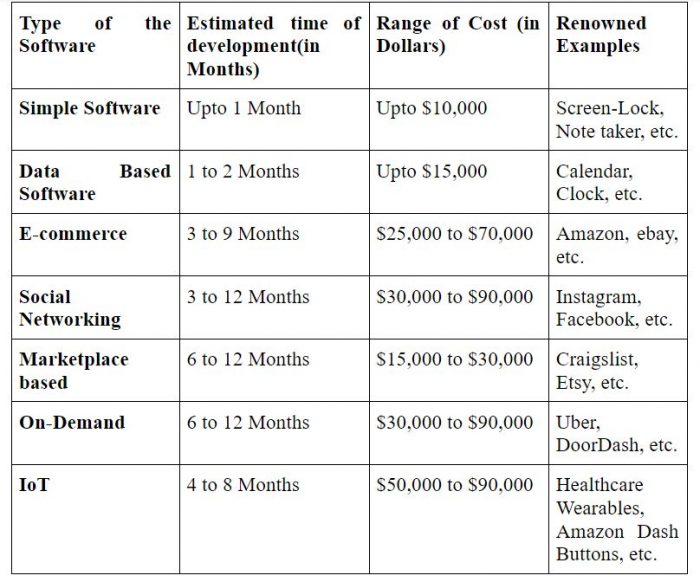 These frameworks can help you roll out new features regularly without compromising quality with their rapid development speed. It, in turn, means more opportunities to monetize your product!

If you’re aiming for flexibility and scalability right from day one, look no further than connecting with a Python development company in India!