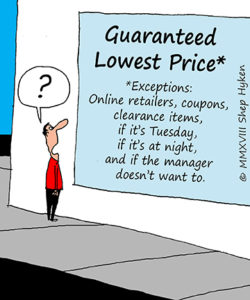 The Pasta House Company is a local chain of Italian restaurants that have been around since 1974, since I was just a kid. On Monday nights they had – and still do have – an “All You Can Eat” special. I loved that. All the salad, pasta and garlic bread you could eat for one low price. When I was a teenager, my buddies and I would all meet at the Pasta House on Monday nights to take advantage of the special. I say “take advantage” because we would starve ourselves all day, waiting to unleash our hunger on the delicious spaghetti and ravioli the Past House served. We did this every week, and every week the manager and servers were happy to see us.

This brings me to an article I just read about a man who was banned from an all-you-can-eat sushi restaurant for eating too much food. Apparently, a former bodybuilder had a special diet in which he didn’t eat for 20 hours and then would eat until he was full. He’d been to the restaurant before, but on this occasion, he ate an excessive amount of food with multiple trips to the sushi buffet line, which by the way, had a very low fixed price of €15.90 (about $18.00). On the way out, after he paid, he was discreetly told by owner and chef that he was banned from the restaurant for eating too much. Now, maybe this example of the athlete at a sushi restaurant is extreme. But, it caused me to think:

Have you ever experienced a promise or guarantee that wasn’t fulfilled?

Just the other day I was talking to a salesperson. He used the word guarantee to describe the results that I would experience. I asked him if that meant he was offering a “money back guarantee.” He said, “No, they couldn’t do that.” In other words, it wasn’t a guarantee, it was just hyperbole to get me to want to buy what he was selling. I’m just glad that I asked the question before I had to go back and ask him to honor his “guarantee.”

And then there are guarantees, promotions and contests that have “fine print” that is focused more on the company than the customer. I get that a company has to protect itself, but be careful not to offend or disappoint your customers.

Whether it’s a special offer, such as “All You Can Eat” at a restaurant, a promise to do anything, or a guarantee of the work you deliver to the customer, there is only one way this works, and that is that you honor your offer, which is the same as honoring your word. That’s what builds confidence, trust and loyalty.