Mobile apps, by the year 2020 are predicted to generate $188.9 billion in global revenue via App stores and in-app advertising – a highly encouraging data for mobile app development companies and their innovatively-enthusiastic CTOs.

Building native iOS and Android apps has always been preferred by mobile app developers;however, React Native (a framework created by Facebook) has lately caught the imagination of CTOs worldwide considering its ability to develop cross-platform mobile apps for Android and iOS while confirming its efficiency to build scalable, complex mobile apps.

Facebook on the launch of React Native rightly quoted that “learn once, write anywhere”. This means, the framework allows mobile app development experts to add native codes (Java, Swift, Objective-C etc.) to the framework – thus allowing to achieve that custom look. So, practically majority of the developed codebase can be used in cross-platform.

Why Build Your Mobile App in React Native

As you see in the survey below, 69.4% developers voted React as one of the preferred libraries for app development. 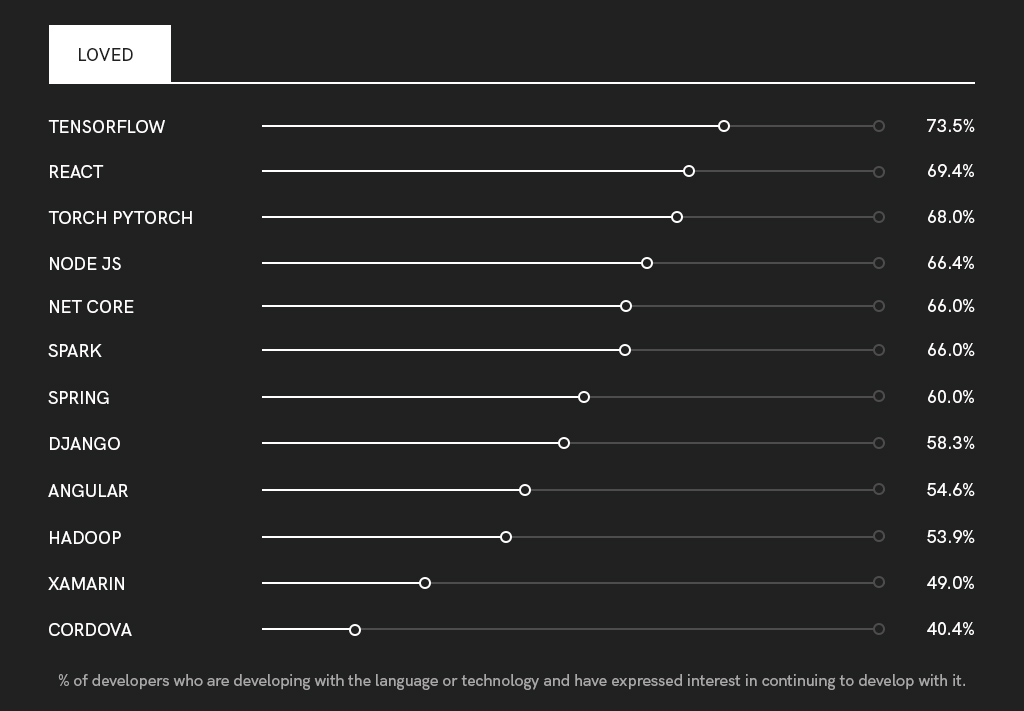 -React Native besides allowing you to build mobile apps using only JavaScriptlets you compose a rich mobile UI using declarative components.
– When you are building a mobile app with React Native, you are using the same fundamental UI building blockstogether using JavaScript and React as regular iOS and Android apps.
– React Native helps you build your app faster. So here instead of recompiling, you can save time by reloading your app promptly.

Why CTOs are Putting their Money on React Native App Development

CTOs or Chief Technology Officers, mainly in a technology-driven IT company have a pivotal role to play as the guiding force behind the product and the engineering innovation, development and deliverables. More so, CTO of a futuristic mobile app development companyis highly expected to assess and monitorfrom many perspectives like long-term sustainability, recruitment, team collaboration,the maturity of the platform, etc. Here’s listing some of the prime benefits of React Native for mobile app development:

React Native facilitates cross-platform native app development, i.e. the code written for one platform can be used on another platform.

React Native empower businesses to build cost effective mobile apps sans any compromise with the look and feel of the mobile application. Moreover, it enables developers to lessen the burden of creating new logics, besides integrating different APIs for two different platforms.

React Native seamlessly combines with components written in Swift, Java, or Objective-C. You may also simply try building part of your app in React Native, and part of it using native code directly – a great way to optimize a few aspects of your mobile app and boost efficiency.

Are you obsessed about building identical mobile apps for iOS and Android, fearinga bad user experience? If you are thinking so, then just get this ridiculous thought out of your mind, since it is simply immature to think that people would keep comparing their (Android and iOS) apps at a time. Rather, users may be confused with analogous content, functionality, and partners.

With native code bases, many a times your iOS and Android apps are likely to get out of sync. This is in most cases is connected to real world problems like, a developer quitting job, going on vacation or over enthusiastically adding a new feature – leading the app to go out of sync. But with cross-platform solution like React Native, you can stay clear from indulging in over-staffing and such low priority issues.

As the momentum for React Native grows, it is quietly and steadily becoming the reality of many apps in the App Store and Play Store. And the community is becoming stronger by the day – Thanks to endeavors by Facebook toinvolve numerous resources, tooling, components, books, best practices, and services for React Native developers and products.

React Native vs. Flutter vs. Ionic

React Native or Flutter or Iconic – how do you make a choice from these wonderful frameworks to build cross platform apps? It’s a difficult call, but hopefully this comparison will help you arrive at the right decision. 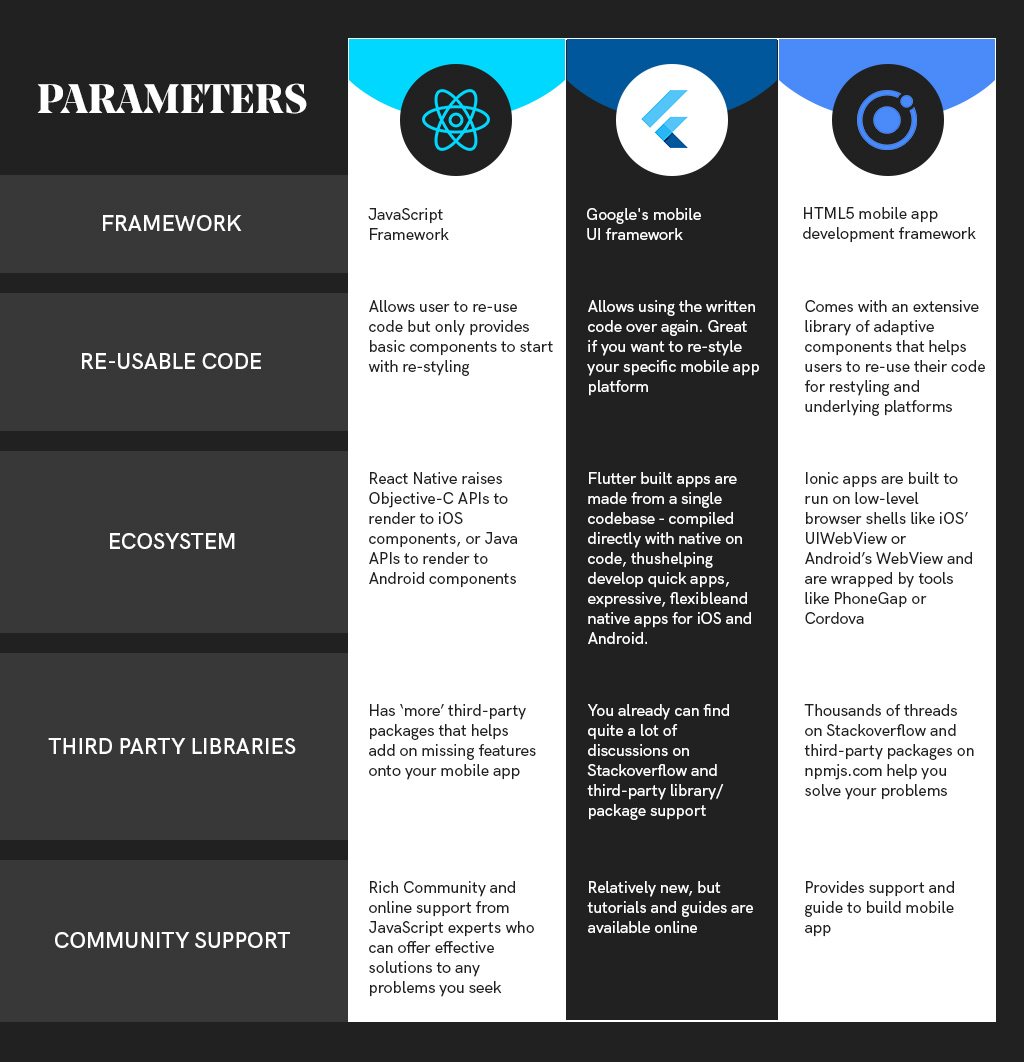 React Native, with the huge business value it brings to mobile app development scenario, opens up hordes of opportunities to position yourself as a trendsetter in delivering highly-efficient cross platform mobile applications. 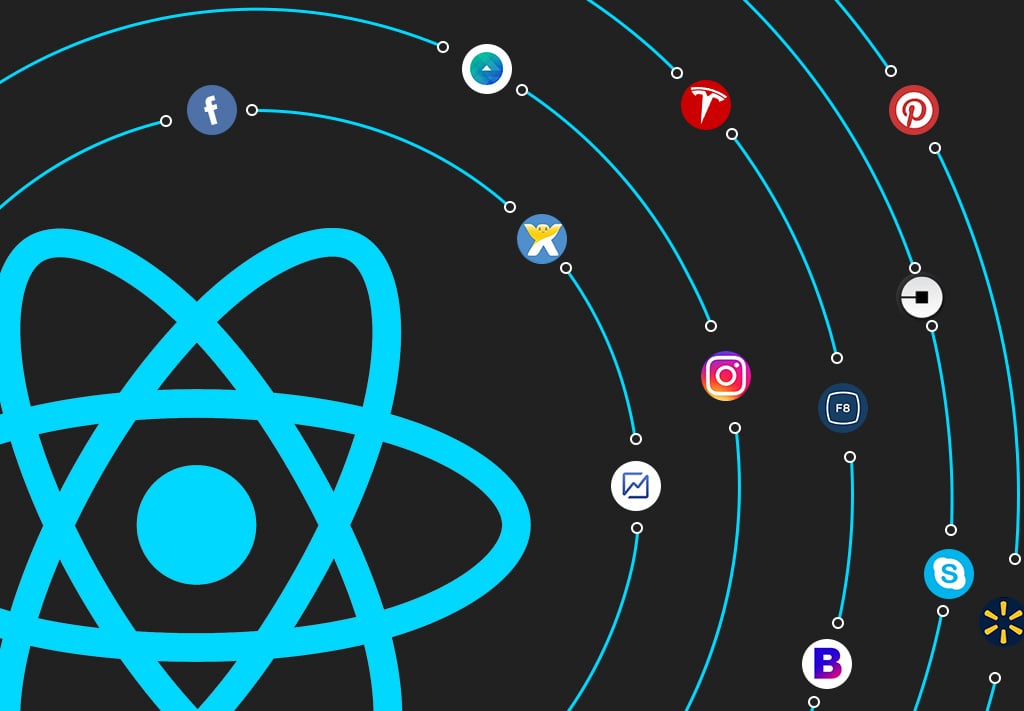 Do you know that some of your most loved mobile apps are built on React Native? Yes, it is true, React Native prides itself to have been the amazing framework behind some of the most popular mobile apps of the modern times from Facebook, Instagram,UberEats,Walmart, Airbnb,Wix, Skype, Pinterest, Bloomberg, Tesla – and the list is growing fast.

Feel inspired and join the league of successful CTOs to build your next cross platform mobile application using the awesome React Native Framework.If you have tried building apps with React Native, share your app story in the comments below. We’d love to hear your experiences in React App development.