Empathy training is a waste of time and will have little to no effect on the customer experience in your contact center. If you want to build empathy skills in agents, you need to have the right mindset and take the right actions. Don’t waste your money on empathy training alone, do this instead.

Many, if not all of these 7 elements can be found in contact centers where empathy is part of the customer experience. These do not happen by mistake, they are intentional and part of the on-going practice of the organization or the contact center itself. You may find empathy training as part of their overall practices, but you will never find it as a stand-alone method for change.

When it comes to long-term strategy, that often is contradictory to the approach that is taken with contact center training. High-performing contact centers avoid this pitfall.

They use data as a development tool, which is an empathetic way to use data, versus using it as a punitive mechanism.

Leaders in these contact centers do not forklift leading practices, they elect to quickly re- engineer practices to fit their environment and purpose.

In these contact centers cultural fit is most often more important than job skills or experience.  They screen for fit, lead for fit and continually communicate about fit.

They practice and model good empathy skills and lead by example. You will find them:

They know that empathy is part of building overall emotional intelligence skills and that modeling, expectation setting and developing these skills are an ongoing part of building a more effective workplace. (Download: 54 Emotional Intelligence Competencies and Definitions)

Our Society is Losing Empathy

In the Civility in America, 2018 survey, the vast majority of respondents – 93 percent – believed we have a civility problem in America; 69 percent believed it was a major problem; and this result has not changed from the 2017 survey. By all observations, incivility is bad and not improving.

As you have probably experienced in contact centers, rude behaviors range widely – from ignoring people, to not listening to intentionally undermining others and insubordination. One boss said to me, “If I wanted to know what you thought, I’d ask you”; an agent told a peer, “This job is crap,” in response to a change in a procedure. A supervisor screamed, “You made a mistake!” after an employee failed to make their points on their internal monitoring form. A vice president, upset about the lack of changes in service-level performance, said over the speakerphone in her car, with other people in it, that “this is how incompetent people work.”

Other common examples of incivility include walking out of a conversation due to lack of interest or answering calls in the middle of meetings. Some leaders behave uncivilly by:

In any of these instances, what matters is not whether people actually were disrespected or treated insensitively but whether they felt that way. Incivility is in the eyes of the recipient. When these things are witnessed in leaders, they will be found in those reporting to them. When it’s in a contact center, customers will get the brunt of it. (Access: Building a Contact Center…Dream Team) 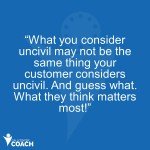 What you consider uncivil may not be the same thing your customer considers uncivil. And guess what. What they think matters most!

Why is it getting worse?

So why is incivility getting worse towards customers? One factor is globalization – agents from one culture sometimes unknowingly behave or speak in ways that customers from other cultures find rude. When taking a dishwasher example in India, for example, they are not common and not native to their society. In the US, a large portion of the population have them and heavily rely on them. If an agent is talking to a customer in the US, how can you expect them to empathize with the customer if they have never experienced a dishwasher?

Or consider the experience Dr. Porath shares in her book Mastering Civility: A Manifesto for the Workplace, about her mentor, Ed Lawler, director of the Center for Effective Organizations at the University of Southern California. Years ago, he gave a talk to a group of students in a large auditorium in South Africa. He couldn’t figure out why he was putting everyone to sleep. The students had their heads down the entire time. No eye contact, no friendly nods, no smiles—nothing. Only later did he learn that this gesture – the bowing of the head – signified an immense respect for him.

Another factor is generation. Research conducted by Jean Twenge, professor at San Diego State University, revealed results that show that students are about 30 percent more narcissistic than the average students were twenty-five years ago. When you’re excessively focused on yourself, you’re going to be that much less concerned about the effects of your behavior on customers.

Porath reports that we can also tie our epidemic of rudeness and a lack of empathy to the general fraying of workplace relationships. Part of this stems from remote work and fewer people at work at the same time. Those who work at a distance often report feeling more isolated and less respected.

And in one study, more than half claimed they were uncivil because they are overloaded, and more than 40 percent said they had no time to be nice. A quarter said they were rude because their leaders were disrespectful. Another quarter reported that their companies lacked guidelines or training about how to treat people.

Technology is at Fault

Technology is also straining workplace relationships. While electronic communication can bring us together, it can lead to misunderstandings, and it often causes people to voice frustrations, hurl insults, and take people down a notch because of the distance. In addition, we spend so much time on computers that we often lose sight of how to connect with people face-to-face. We forget that others, like us, are human beings with needs and feelings.

Dr. Porath reports that one of her biggest takeaways over the past couple of decades is that incivility and the lack of empathy usually arises not from malice but from ignorance. When she started her research, she perceived that jerks out there were intentionally ruining workplaces; she now sees that most bad behavior reflects a lack of self-awareness. We don’t want to hurt others or offend customers, but we do. We’re oblivious—and behaving in ways that we would never want to be treated.

She shares that whether it’s globalization, generational differences, workplace pressures, the fraying of workplace relationships, or technology we seem to be more focused on ourselves and less on others. And to the extent that this is causing us to treat one another disrespectfully and without empathy and it’s costing us big.