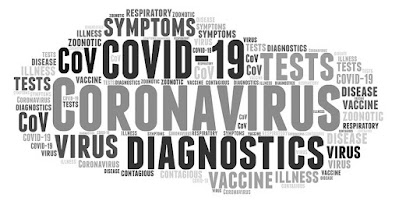 The COVID-19 pandemic has been wreaking havoc on U.S. businesses since March when the governors of most states began closing “non-essential” businesses and issuing “stay at home” orders. As the reality of the pandemic sank in, it quickly became apparent that COVID-19 would have a major impact on the financial performance of most companies.

What was not clear back in March and April was exactly how significant the impact of COVID-19 would be and how long the economic disruption would last. When public companies released their quarterly financial results in April, most withdrew forward financial guidance for the balance of 2020 because of the exceptional uncertainty caused by the pandemic.
As we begin the third quarter, business leaders still face many COVID-related uncertainties, but there are indications that the “bottom” of the COVID-19 recession may have occurred in April. For example, both retail sales and consumer spending were higher in May than in April, and the June unemployment rate was 11.1%, down from the April high of 14.7%.
A special edition of The CMO Survey provides several important insights regarding the impact COVID-19 is having on company financial performance and about expectations for further recovery. The CMO Survey is led by Professor Christine Moorman at Duke University’s Fuqua School of Business, and is sponsored by the Fuqua School of Business, Deloitte, and the American Marketing Association.
The CMO Survey is conducted twice each year, and the results are usually published in February and August. However, given the widespread impact of the COVID-19 pandemic, a special survey was conducted in May, and the results were published last month. The special edition of the survey produced 274 responses from senior marketers at for-profit U.S. companies.
This survey addressed a wide range of issues relating to the impact of COVID-19 on marketing, but it also asked specific questions about how the pandemic had affected company sales and profits in the two months preceding the survey, and what sales and profits would look like 12 months after the survey.
Current Impact on Sales
On average, respondents to The CMO Survey reported that their company’s sales revenues had declined 17.81% during the two months preceding the survey. However, the revenue impact varied significantly across companies. Nearly one in five of the respondents (19.5%) reported that sales had declined by 50% or more, and nearly half (46.8%) said sales had fallen by 20% or more.
Overall, B2B companies fared better than B2C companies. On average, respondents from B2B product companies reported sales declines of 14.28%, and respondents from B2B services companies said their sales had fallen by 16.92%.
The survey also revealed that the sales impact of COVID-19 varied considerably across industry verticals. The following table shows the sales impact on the five largest industry verticals represented in the survey. 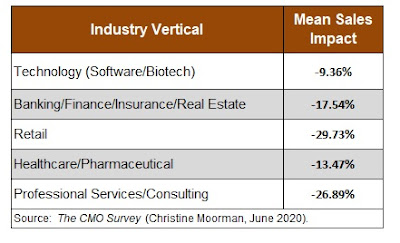 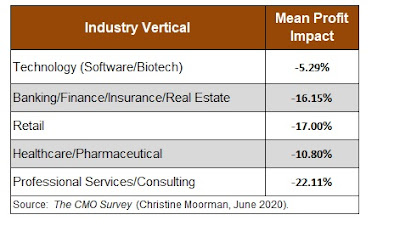 Future Expectations – Sales and Profits
The CMO Survey also asked participants to estimate how sales revenues and profits will look 12 months after the survey (May 2021). Overall, survey respondents were considerably more optimistic than pessimistic, as the following table shows.