I’ve talked and written a lot about the importance of digital interfaces in CX over the past years: about ultra-convenience, the zero interface (like the Amazon Go stores) and – more recently – the enhanced interfaces of the metaverse. The reason why I attach so much importance to them is because digital interfaces are an absolute crucial part of your customer relations: they are the portal through which your company interacts with them.

And I feel that it’s high time for a lot of companies to re-evaluate these ‘portals’. Sure, the enhanced AR and VR interfaces will one day change the game of CX, but that may not be for the very near future. I’m talking about something that is a lot more present than that today: TikTok.

I mean, if you compare it to the one from Google, the latter feels really, really old school. The same goes for the real estate industry: finding the house of your dreams online involves clicking away a lot of advertisements and (un)ticking a lot of, sometimes pretty irrelevant, boxes, while other parameters that are important to you don’t even appear. And the result is a list that is often brimming with examples that are basically a horrendous match for you. Even Netflix truly underdelivers when you compare it to TikTok. Perhaps you’re familiar with the Netflix syndrome: how it takes upon 40 minutes on average per person before they can find a new show to watch.

The interface PLUS the algorithm

When you understand how powerful TikTok’s interface and its ultra-personalized content are, it’s actually pretty strange that a lot of people are still so cynical about it, especially the over 40 group. I invite all of those non-believers to spend some time on TikTok to truly experience how much fun and deeply engaging its algorithm is. For me, this is the future of CX and interfaces, where it’s not just about the interface in itself but about the interface PLUS the algorithm which can lift the experience to the next level.

Those who know me, know that for the past 10 years I have been advising my business audience to be “fast, easy, and fun”. And TikTok truly is all of these things. But there’s also one extra ingredient. And that is intense personalization because of a superefficient algorithm.

One of the reasons why the algorithm is so successful, is abundance of information, of course: the design of TikTok allows users to give continuous feedback, which is a lot more than on the other social platforms. To compare: you can watch Youtube or Netflix for 45 minutes without giving any feedback. Or you could scroll your Facebook wall without reacting with emojis for minutes in a row. TikTok users constantly interact with the application: even if they don’t actively do so, they are still giving information by watching a clip longer than usual or dismissing it really quickly on the other hand.

This is one of the smartest, easiest and most fun interfaces out there. And it’s striking to see how the other social media have come under a lot of pressure from this younger version. For instance, Facebook recently announced how its revenue is shrinking. Though this could be because we may be in a transition towards the “next internet” – probably a combination of Web3 and the metaverse – the fact that TikTok adoption keeps rising while Instagram, Facebook, Snapchat and Youtube seem to plateau and even decline, shows how powerful the former really is. Here’s for instance a chart of penetration in the UK to show what I mean: 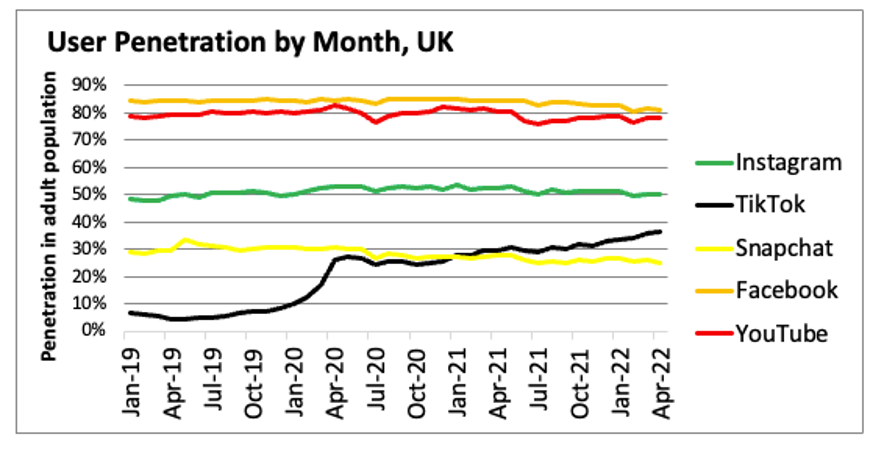 Meta’s reaction to this evolution has been uncharacteristically uncreative, by just trying to copy TikTok’s approach on Facebook and Instagram. With a major backlash from influencers like Kylie Jenner as a result. So it’s safe to say that just blindly copying the TikTok algorithm and interface will not be the best method. Really try to think strategically about what your company could learn from TikTok’s approach when it comes to interface and algorithm.

Others seem to be more successful at integrating its features. You may not have heard of Audacy but, in the United States, it is the second largest radio company, owning 235 radio stations across 48 media markets. It acquired the podcast discovery app Moonbeam which operates much like TikTok. Its feature ‘Beam’, for instance, starts playing an episode immediately. If you don’t like it, you swipe up and it plays another show, learning about your preferences as it goes along.

Another interesting example is how Amazon recently announced it has been testing a TikTok-like feature where users can post and share pictures and short videos and purchase products. For now, this is just an experiment, only visible to some employees, but it’s also a very clear signal that the retail giant is moving in the direction of one of the world’s fastest growing social media.

I’m convinced that if we don’t change our interfaces rapidly in – let’s say in the next two to three years – we are going to miss out on an entire generation that is now being trained to use interfaces in a completely different way. I don’t see this as a threat, though. I see this as a fantastic opportunity to renew how we think about our products, services and our relations with our customers.