Yesterday I watched a toad walk across the outdoor side of our kitchen window.  Picture it!  I wish I had video but it ran so counter to what I have observed toads doing over the past 65 years that I froze.  I performed a google search and found exactly one image of a toad on a window. Please understand that the dirty window and sill are not mine - I found the image via a Google search.

Regular readers know that I'm all about the data and I have written nearly two thousand articles based on data from Objective Management Group's (OMG) assessments of more than two million salespeople.  Occasionally however, I see data where incorrect conclusions have been reached and my conclusions run counter to theirs.  One such example is a beautiful infographic from sales playbook company Xant. I am going to share some of their data, graphics and conclusions and I'll provide my counter argument to their conclusions.

I'm not challenging the data, only their conclusions.

They cited data from tens of millions of outbound follow up calls to leads showing call conversion rates being significantly better on Mondays, Tuesdays and Thursdays.  Their conclusion was that salespeople should make their outbound calls on those three days. 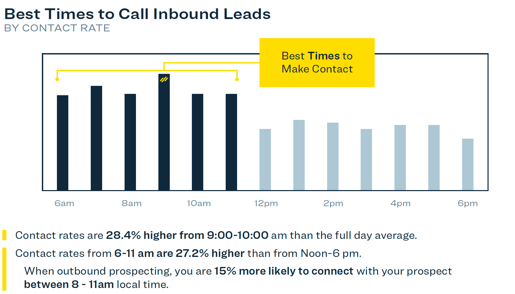 The data also showed that contact rates were best in the morning and they suggested that you make your calls then. Of course, I see it differently!  I have always suggested that outbound calling be performed for no more than 4 hours per day because salespeople become exhausted and less effective as the day goes on.  I believe the poorer afternoon contact rates are due to salesperson fatigue; not prospect behavior!  Therefore, if Xant is suggesting that you call in the morning, begin making your calls in the afternoon when fewer salespeople are calling! 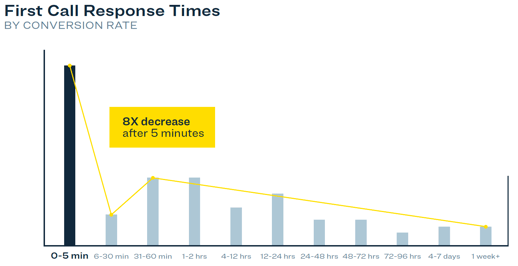 There was one conclusion that I wholeheartedly agreed with and that is the time elapsed from lead to follow up call.  Five minutes does seem to be magical with a conversion rate that is 8X better than waiting even ten minutes before your call!  FOLLOW UP IMMEDIATELY!! 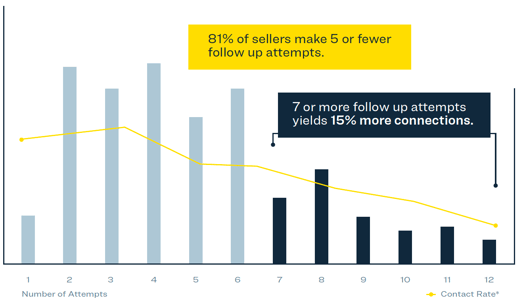 Their data shows that most salespeople - 81% - make fewer than 5 follow up attempts but the data isn't filtered by title. Calling the C Suite requires more attempts than calling a manager but salespeople suck at reaching decision makers.  Read this article.  Despite that, it is very clear that you must be persistent! The reality is that the contact rate for between two and six attempts is much better than for one attempt and more than eight attempts.  My advice, call every day until you reach the person that generated the lead.

When it comes to lead follow up, I have a few suggestions.

Do it quickly and you won't have to do it a lot.

Do it effectively and you'll have a better conversion ratio.

Do it a lot to become more effective.

Let's pivot to a baseball analogy.  If the batter fails to get a hit, one of three things have occurred:

Don't get yourself out with lack of outbound calling expertise.  Practice every day and become awesome.  When I first began selling I hated cold-calling with a passion.  Since I was spending 6 hours per day doing what I hated I vowed to become good enough at it so that I could do it in one hour.  Remember, the better you are, the less calling you'll have to do!

How to orchestrate customer journeys in real time at scale

Don’t Put Your Customer Hat On!

Cloud Computing: The Role it Plays in Insurance Sector

Make Your Sales Pitch Personal with This One Subject

Four Ways Backup Can Save Your Business