When the gunshot is fired at the start of the Olympic final of a 100m dash,    8 world-class sprinters on the block will leap towards their dream of Olympic glory. All 8 equally skilled, each one equally trained, equally driven, all of them with the same hunger to win. Each one committed to chasing (pardon the poor pun) their life’s single purpose and calling, and each one, to be sure, aspiring to be chased from the moment that gunshot goes off.

The biggest advantage, however, goes to the athlete that gets those few micro-seconds of advantage from a perfect start. It is an advantage that the athlete creates for himself less than one second into the race. The rest of the race is a battle of sheer skill, years of training, endurance, and grit. 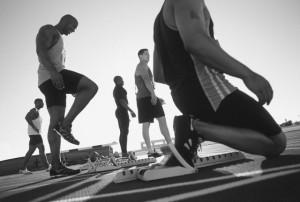 If you have ever been a finalist of the 100m dash in the Olympics, you’ll know exactly what  I am talking about. Surely you prayed fervently for a perfect start. And secretly, and with equal fervor, you prayed that Usain Bolt will have a bad one. Admit it.

But on the other hand if you are like me, leading the life of a common man, doing common things like drinking a lot of coffee, doing BPM projects, being in a perpetual quest for uncommon excellence from them; frequently obsessing about processes,  hungrily reading up any material published on BPM; eagerly following new thinking emitting from BPM conferences; agreeing and/or disagreeing with analyst views; visiting Bouncing Thoughts regularly and trying to discover great depth of perspectives there, and frequently giving up; occasionally getting emotional about nomenclature & definitions and so on, then let me assure you that the importance of a good start is still very much relevant to folks like you and me too.

Why exactly is a good start being discussed in such detail on your favorite BPM blog?

I can explain in a sentence and two words.

To me, the start of a BPM initiative really happens much before the kick-off meeting, but the kick-off is equally important and is a ‘starting block’ of sorts for sure.

For at least a decade now in these BPM kick-off meetings, a section of attendees have involuntarily, and often privately, grimaced and winced  during the proceeds and Peter’s question in the forum has brought out the despair of fanatical believers of business technology.

Who are these grimacing and wincing participants, you ask.

Let me try to answer your question briefly. These face contorting participants are typically fanatic believers of business technology, and, in particular, Business Process Management. Indeed, almost all of them non-Olympians. Like you and me.

In other words, there are two kinds of people. People who get it and people who don’t. And today after over a decade, as the well meaning fanatic has become more vociferous , others in the room have also started to respond with frowns, grimaces, sneers and scowls. This has undoubtedly created a very strange situation.

Here is a sample exchange in one such meeting. Attending the meeting, we have the client – usually a project owner, then we have a fanatic believer of business technology like you or me or someone from Peters forum, a project manager, and the Rest that includes some IT peeps and a miscellany of folks from business, and from here and there responsible for this and that. By the time you get to the end of this sample exchange, you will also realize that all of them are wincing and grimacing through-out the meeting.

So you get the picture. Everyone was experiencing strong feelings, everyone had something to say and when they had a chance to say what they had to say, everybody else is grimacing and groaning and wincing and slapping their foreheads and contorting their faces and banging their heads on the desk, trying to jump out of the window, biting into the plaster on the wall and peeling it off the wall and so on.

Meanwhile, on the other side of the glass wall of the conference room, an AC technician walking by casually turns and takes a look inside  – an unusual sight greets him –  everyone was making really extreme faces at each other and to say the least, there was a significantly wide range of expressions on all the faces inside. Expressions that somewhat resembled those depicted in the image below. 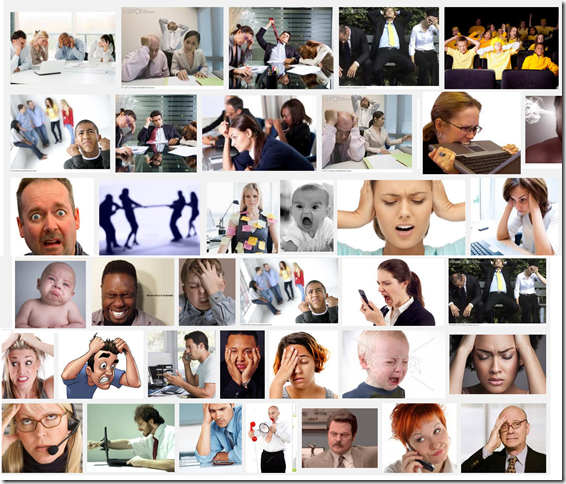 The BTF steps out for a coffee and almost bangs into the AC technician.

“You got some teamwork going there” the technician says to the BTF pointing inside the room. “I didn’t know you guys did Theater, man – that’s a big change from the usual same-same! One look at all your faces and I can tell you guys sure are care-free and committed. Happy practicing for the big gig, dude!”

The BTF was of course surprised to hear this. For once that day he had a blank expression. And with that, he could feel all the muscles on his face relax and ease out. He suddenly felt better and as he started feeling better, a new detached perspective started to form.

The start was important, alright, but it wasn’t a 100m race, after all!

It was more like a 4X100m relay race. It was about the 4 that made the team. Consultants, developers tool experts, architects, whoever. Do what you have to do, but do your best and give me the baton on time and I’ll run with all my might like you did towards our goal.

He turned and went back into the room with a very unusual expression. Everyone stopped and gaped at this strange, unfamiliar, new expression.

It wasn’t anything mysterious, it was just a warm smile.