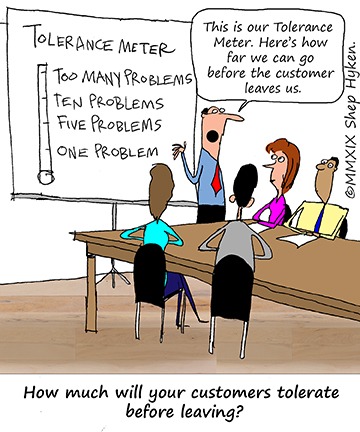 Last summer I played golf with a friend. At the end of the game, he had blisters. He didn’t play very often, and the golf clubs rubbed his skin raw. My hands were just fine. I’m fortunate to play several times a month and over time I’ve built up calluses that prevent those nasty blisters. It’s simple. The more a person plays, the thicker the calluses get, which immunizes people against blisters and pain.

That brings us to a dinner I recently attended where I met Terry Rapoch, a consultant from Dayton, Ohio. We were talking about why people put up with bad service – especially service that is inconvenient and has friction. He called it an experiential callus. There may be a little pain, but you get used to it and put up with it. In certain situations, for certain products, it’s just easier to deal with the pain than switch to a different company.

For example, switching banks isn’t easy. Changing software can be very painful. So, a customer might tolerate a certain amount of pain in the form of poor service or friction and live with it until it becomes so bad they feel forced to switch.

The type of business that keeps customers by making it difficult to leave is known as a sticky business. Sticky, because it’s not easy to switch. It may take a lot of time and effort. It may be, metaphorically speaking, painful to switch.

I once met an executive of a software company who openly admitted that his company didn’t have to provide the best support, but barely adequate support. He knew it was difficult for his customers to learn a new software program, so the bare minimum effort was all he needed to keep his customers.

That may work in the short term, but eventually, a competitor will see the opportunity. That’s why Richard Branson started Virgin Air. He didn’t like the way big airlines treated customers. He said they were taking the mickey out on the customer. That’s British slang, and roughly translated it means having a joke at the customer’s expense. In business, that means not giving the customer a good value for their money. Customers may have built up tolerance in the form of an experiential callus to the way the airlines treated them. Then they realized they had a choice—and started flying Virgin Air.

It’s not always easy to change when you’re used to something, even when you experience a little pain and know there might be a better alternative. That callus gets pretty thick. But trust me; there will be many Richard Branson-types out there, looking for opportunities to capitalize on the experiential callus and finding ways to give customers a better experience.