Python is rapidly evolving and therefore, it is quickly becoming a favorite of the engineers. There are many features that make Python the best choice. It is not only the simplicity and the ease of using and learning Python that makes it a favorite, but there are other factors too. Although, being simply and easy to learn are surely one of the top features. As, because engineers step into the world of Python because they know that they won’t have to spend a lot of time in learning it. Also, as it is simple, therefore, they will have more chances of exploring it, and upgrading their skills. This feature works well for the firms as well, as they know that they do not have to spend a lot of time on training their new staff. 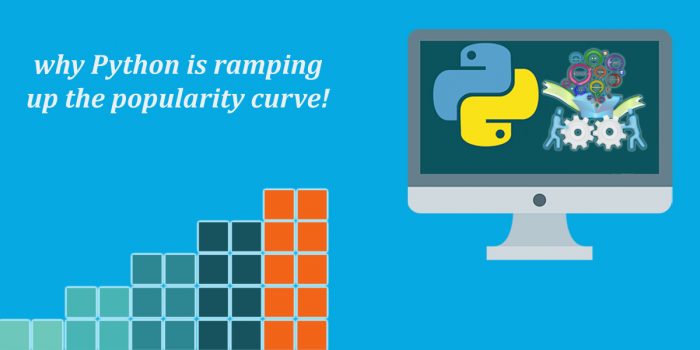 Experts are trying hard to find out the exact reasons which back the huge growth of Python on the field of computer science. The number of people using and learning Python is soaring. Therefore, the language is becoming more famous.

Listed below are the most amazing reasons that Python a top choice of the world:

Enables the developers to try something new

It is quite evident that Python was initially enthused from customary programming languages, such as Java or C++. Therefore, it is also quite clear that most of the features offered by Java or the other traditional languages are somehow present in Python as well. Also, Python contains the ability to set up any sort of app just like Java. A well learned Python engineer is able to build a stringer desktop software, web app, mobile software and even robust hardware program. Python offers the engineers the flexibility to choose what they want to develop, even games. Therefore, people are not bound to develop only a certain thing.

Creating a rage in the data sciences industry

Python is becoming a hot favorite of the data science experts. It is used heavily to build very strong AI based programs as well. At the same time, machine learning experts are finding Python quite useful as well. Additionally, a large set of Python developers are constantly visiting data science technologies. This implies that Python’s popularity in data science as well as in machine learning is probably is steering a lot of growth as well. Also, we have seen the immense growth of Python in the field of Artificial Intelligence. People are trying to make the best use of Python to make interesting AI centered projects.

Python is mostly the top preference of various students and skilled programmers simply because it is not costly. A large set of both future and present engineers like to know, and explore Python in order to find out how to get real jobs. As, it is definitely better to spend time on things that will help in your professionals life, then spending time on things that may not be fruitful in terms of a professional career. As Python is growing immensely, therefore, the career prospects in the world of Python are huge as well.

Python is already quite famous, and it is regarded as one of the most quickly growing main programming languages as per many experts. It is also reported that the growth of Python’s popularity as per the percentage of visits to pages that have information related to Python is immense. Millions of developers and even students are using information regarding Python development which is available online to learn the language more deeply. Also, the popularity is same across companies, industries and countries.