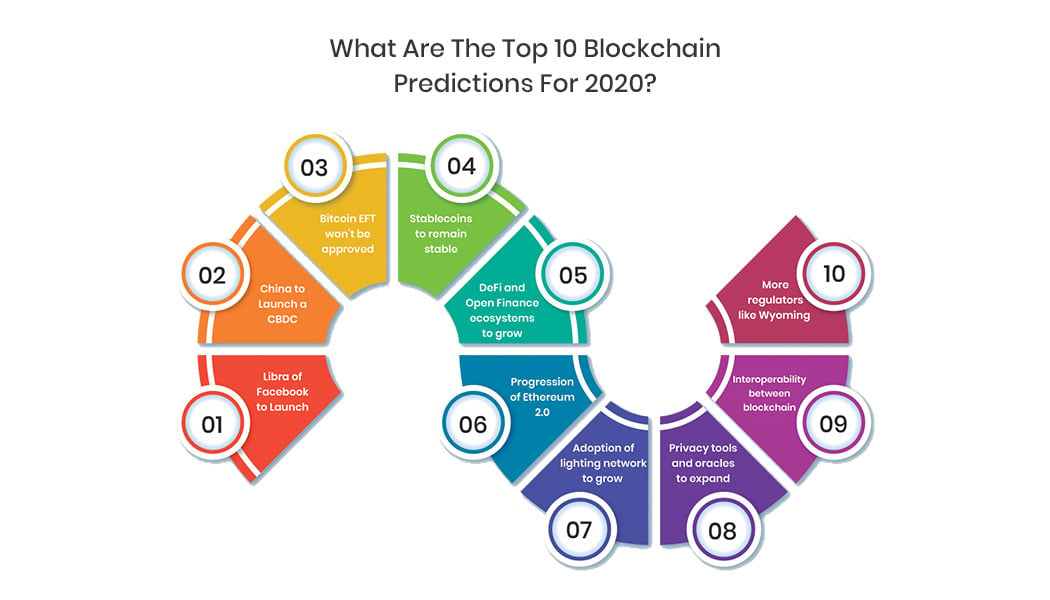 The year 2019 was remarkably doing well for the crypto space and blockchain. There were new alliances introduced and new cryptocurrency trading products. Ethereum and Bitcoin kept their heads up in a bear market while many blockchain protocols where nurtured and expanded in growth. In addition, U.S. Congress along with foreign central banks both have been paying close attention to what blockchain and digital assets offers to the market. China has also stepped its foot in blockchain space by spending many billions on innovation. On top of that, the giant financial companies on the globe are developing their blockchain sphere, a trend that seems not to be slowing down. The blockchain development services are increasing in demand as new adoptions of the technology continue to be witnessed.

Come 2020, there are a lot of expectations and in this piece; we look at the likely expected events that are going to shape the blockchain space in 2020.

Although with limited functionality, Facebook’s Libra, a payment network initiative is expected to launch in 2020. Libra received a huge resistance from regulatory bodies in Europe and the U.S., however, is has slowly been being developed while staying away from the attention of media. We have seen regular development activities and commits with Facebook’s GitHub repository. It is expected that Libra is going to launch within one jurisdiction and will have a very restricted scope, partnerships, and functionality. While it shows signs of progress, it may not be the onboarding payment vehicle or rails as it had originally promised, but the expectations are high.

China to Launch a CBDC

We already know that among the largest cryptocurrency exchanges and mining power are based in China. The country has remained active in crypto space and blockchain. Recently, Xi Jinping hinted that blockchain is China’s future and the country was preparing to take the lead in this technology. This announcement by China’s president contributed to massive blockchain research work and investment. In recent times, the Bank of China did complete issuance of about $2.8 billion comprising financial bonds for SMEs or small enterprises. Among the key developments that the country is eyeing include Electronic Payment or Digital Currency (DC/EP) initiative. This development is likely to be rolled out in the year 2020 and you would see a lot of activity from blockchain development company teams as they take center stage role to help with the development needs.

Bitcoin had filed for EFT, and the eagerness of whether the U.S. Securities and Exchange Commission (SEC) would approve these filings received a lot of attention. SEC has nearly rejected all the EFT filing for Bitcoin citing that there were no sufficient financial surveillances as well as the presence of manipulation within the markets. Companies such as Chainalysis, Elliptic, and CipherTrace have been offering important tooling. The appointment of Brad Sherman to chair the Subcommittee on Investor Protection, Entrepreneurship and Capital Markets could be another reason why the EFT filing for Bitcoin may not be approved in the year 2020. The Subcommittee on Investor Protection, Entrepreneurship and Capital Markets practically monitors the activities of SEC as well as other self-regulatory bodies such as FINRA. This man doesn’t like cryptocurrencies as a whole including Bitcoin.

In the past few years, we have seen a trend where issuers tokenize fiat currencies and use them as more convenient mechanisms within cryptocurrency exchanges. This trend is expected to continue. There will be increased adoption of stablecoins, particularly the ones that are fiat-backed while also being driven from exchange trading. We may see projects like J.P. Morgan’s stablecoin and Fnality come alive. Today, Tether USDT, a dollar-backed cryptocurrency asset is very volatile.

Presently, there is over $290 million stacked in different applications within the DeFi ecosystem. Probably, this number arises from the growing of Maker DAO as well as Dai stablecoin. However, there is growth and expansion of prediction markets, decentralized exchanges, and borrowing or lending applications. In the venture capital space, Open Finance was a hot talk and the trend is expected to go on.

With the teams responsible for developing components and clients for the new Ethereum 2.0 blockchain began listing to feedback in the ecosystem, they started to be more vocal, often sharing progress and updates. Such feedbacks and sharing of updates, as well as progress, resulted in more confidence hinting that the new, improved Ethereum blockchain is still progressing. As per their roadmap, there is a huge optimism come 2020 as it is expected that there will be partial deliverable.

Even as the projections come alive, blockchain development services will reposition themselves to meet the demands.

Adoption of lighting network to grow

Being a layer 2 implementation atop the bitcoin network, lightning networking is aimed at providing instant bitcoin transactions or payments. The network is intended to rapidly improve the prevailing bitcoin transaction speed, which has been touted as a hitch. The lightning network leverages off-chain data while allowing low fees. It is projected that in 2020, there will be more applications, channels, and nodes created on the lightning network. There will be a growing trend within the bitcoin development ecosystem because of companies and tools such as Exonum and RSK which utilize the bitcoin network as their base.

We have seen companies such as Ernst & Young invest heavily in the buildup of privacy tooling intended for the public Ethereum ecosystem. Nightfall is a good example of the product Ernst & Young have invested in. This shows how sometime in the future, we will enterprises use the public mainnet in transactions with adequate privacy comfort. More and multi-party computations (MPC) and zero-knowledge (ZK) projects are expected to be seen in 2020. These projects will begin to gain their spot in the blockchain space. In the event that VC funding for start-ups is perceived as a metric, you would see MPC become a hot area. When it comes to projects for oracle, Chainlink is projected to have strong partnerships as well as integrations with other new services.

Interoperability between blockchain protocols to increase

PegaSys developed a native Ethereum client called Hyperledger Besu that moved to the Hyperledger initiative of Linux Foundation. This move brought about a remarkable sign that permissioned blockchains are going to continue converging. While the differences between the main blockchain protocols such as Besu, Quorum, Corda, and Fabric are significant at this point, however, there is an open-door to initiate dialog that could lead to research and collaboration. There would be more research regarding how assets within the different chains are able to co-exit. 2019 saw deployments of multi-cloud blockchain meaning it would not be a surprise to see cross-blockchains pilots come next year.

In digital assets, Wyoming has already laid down the groundwork as well as a digital-banking-friendly regulation ecosystem. Digital assets have been separated into three different categories, and Wyoming explains the differences occurring between digital securities and virtual currencies. These assets all deem to be intangible personal property. Other states like Arizona, New Mexico, and Colorado are as well looking into similar legislation frameworks.

2020 is seen to be the year that is going to shape up the importance of blockchain technology as well as digital ecosystems. There are various things we will watch happen in 2020 as the technologies continue to be promising. It is the years when you will see major blockchain protocols, as well as digital assets, grow in usage, adoption, and metrics. We also expect to see an increased pool of blockchain developers surface – including blockchain development India teams to help in fostering the growth and adoption of the technology.