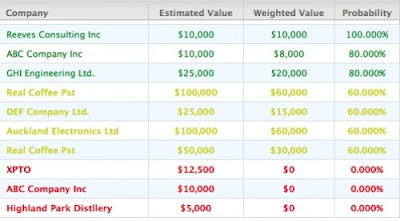 Weighted probability, or percentage probability, is a technique sales managers use to manage the uncertainty inherent in sales forecasting. It’s a complicated concept. Most people have trouble understanding why it works, which means they can’t figure out how it works.
After all, winning a deal is a bit like getting pregnant. Either it happens, or it doesn’t. There is no half right. That’s why experienced sales professionals hate making sales forecasts. There are always 12 ways of getting it wrong, and only 1 way of getting it right. No sales pro worth the title wants to lose a deal which is in the boss’s forecast.
Sales managers don’t have a choice. The forecast is part of the job. Probably, the most challenging part of the job. Weighted probability helps them write more accurate forecasts, not for individual deals – that’s more about qualification and sales process – but for the pipeline, as a whole.
So how does it work?
The concept recognises not every proposal will end in a sale, and assigns a probability %age to each estimated value. It calculates the %age by weighting particular characteristics of the deal. When the estimated value of each deal is adjusted by the weighted probability, the total value of the pipeline is a better estimate of what the out-turn will be than any other method.
A simple example helps set the scene.
The sales manager might calculate his team, as a whole, wins 3 of every 10 proposals. If there are 30 proposals for next quarter he can forecast to win 9 of them. If the average sale value in the pipeline is $5,000, he might forecast for the quarter 9 deals at an average of $5,000. That’s $45,000.
In this example, every deal is assigned a weighted probability of 30% at $5,000, that is $1,500.
Working with averages can be surprisingly accurate, if the pipeline is large enough, but there is one obvious problem – the outliers. Some very large deals, or some very small deals, or both, can really throw out the averages. In our example, a single deal worth $100,000 will really throw out both the average deal size, and the forecast as a result.
Calculating a weighted probability for each individual deal, in part, solves that problem.
Instead of adding up the entire pipeline and calculating averages, the sales manager applies a probability, based on confidence, to each sale value. If she thinks that $100,000 deal is 25% likely to come in, she’ll add $25,000 to the forecast. Another deal might be $50,000 at 50%. That goes into the forecast at $25,000, as well.
Just like the average method, the confidence technique can be surprisingly accurate, even when there are large outliers in the pipeline. Not perfect, but better than anything else, for some businesses. When there are enough deals in the pipeline, and the combination of sales manager and sales rep are experienced in their market, weighted probability based on confidence is a more accurate technique for estimating the total sales for the period.
Experienced professionals working in a familiar market with a typical deal can be quite good at estimating probability. But confidence can only be a subjective assessment, and still granular. The confidence will usually turn out to be 75% ( which means feeling good) or 25% (which means not comfortable). And for inexperienced sales people the confidence factor is close to useless. They have nothing to measure against, are probably keen to please the manager with a high number, and may even be bluffing, covering up their failings. We’ve explained this in detail in the Good, Bad, and Simply Ugly.
It does sounds dreadfully technical and complicated. The theory will impress the bean counters. But is it more accurate than simple guesswork.
Yes, but maybe not by a lot. There are still too many variables, and the assessment is subjective and can’t be calculated.
And that’s where Sales Probability Process Management enters the picture. We’ll explain how this theory turns a black art into a science in a later article, but it’s one of the fundamental principles of Reengineering Sales Management.

How to orchestrate customer journeys in real time at scale

Don’t Put Your Customer Hat On!

Cloud Computing: The Role it Plays in Insurance Sector

Make Your Sales Pitch Personal with This One Subject

Four Ways Backup Can Save Your Business