We all tend to use the tagline “analyze the customer journey” to discover opportunities to improve the customer experience, since it’s clear that companies need to make it easier for their customers1, anticipate snags and offer solutions2, and figure out how to delight them.

My wife and I were very excited to travel “down under” to Melbourne and Sydney, Australia last week, her 1st trip there, where I worked with my co-author and business colleague David Jaffe. I booked us in Business Class on Qantas, the “national airlines” of Australia with a 4-Star rating according to SkyTrax3 and the 4th “most punctual” airline in the world4.

However, for our customer journey Qantas failed in so many ways (22-hour delay leaving San Francisco, canceled flight, lost roller bag wheel, down-graded to Economy, no proactive alerts, no surveys to get feedback, no apologies) that its excellent in-flight service could not recover.

Here’s a quick view of our customer journey shown in 26 steps, with 10 = best and 0 = horrible (see the spreadsheet describing each step in the footnotes5). As you can it started out fine, fell already in steps 2 and 5 when we discovered that our 14-hour flight to Melbourne was delayed by 1, then 2, and finally 3.5 hours until 1.45am when the Qantas Captain told us at the gate that the crew had timed out, and the mechanics still hadn’t fixed the problem, so the flight would be delayed until sometime the next day.

It only got worse in steps 6-9: After another 15-minute delay the gate staff, who worked for another airline, told the 245 passengers to return to the check-in counter for further instructions. No one appeared for 30 minutes while everyone lined up grumpily, with no special treatment for Business Class. By 3 am word spread that the new departure time would be 6 pm, but no one handed out the form – we had to pick it up in person when we reached the front of the queues. When I reached the head of one of the lines the same non-Qantas staff told the rest of us that they had run out of hotel rooms so we were on our own! Fortunately, I called my favorite hotelier Hyatt and they came through and we helped another stranded couple (from Tasmania) to book a room there, and wound up in San Francisco for the night.

We returned to check into that rescheduled flight, relaxed in the lounge, went to the gate, and discovered that we were delayed again, another 1, then 2 hours (step 12). When we finally boarded, the same crew that had timed out 22 hours earlier greeted us, and treated us, with warmth and excellent service (step 14).

The problems continued when we finally landed in Australia: A canceled connection in Melbourne that resulted in a well-played rebooking, lost wheel on my roller bag, down-graded to Economy in our last flight (step 23: “An earlier flight was canceled and a passenger with higher status was moved into your seat.” Incredible!!), and interminable waits on hold to reach customer service or reservations (I was told my every Qantas employee that the call center had terrible service levels; the Qantas IVR prompted me for my Qantas frequent flyer number but since I didn’t have one, having used my Alaska Gold number, and did not ask if we booked Business Class the way that Emirates and other premier airlines do, we were dumped into the “general” queue). To add insult to injury, it’s been a week and Qantas has not said a word about this botched experience (the final step 26).

What went wrong, and what could have Qantas have done to “make it right?” Seems to me that Qantas needed to have a “disaster recovery plan” for cases like this (broken aircraft in an airport with no back up, seconded staff from another company) with a very high level of communication and remedies to offer all passengers, especially Business Class, even if they were not Qantas frequent flyers. If Qantas has such a plan, it surely didn’t work.

Some might argue that Qantas redeemed itself with a superb in-flight experience (the “service recovery” argument), but we lost a precious day in Australia. Others could calculate a poor -1 NPS and average the 26 steps to produce an overall score of 5.4, also poor. As I pointed out in an earlier column called “Get Rid of Average Thinking: Make Every Experience Count”6 it’s much more relevant to study the outliers, in this case, the 7 steps where Qantas scored a goose egg 0.

Boiling down our customer experience, with an emphasis on these 7 zero scores, and applying the lessons and frameworks in our two books, we see that Qantas needed to:

Be proactive. We were held at the gate for more than four hours with the board showing later and later departure times between 9pm and 1.30am! with kids crying, families sleeping, elderly passengers hobbling around, and mobile phone batteries draining away (an SFO airport issue since there were very few plugs). At no time were we advised to return to the two lounges, or find food, or charge our devices on power strips that they could have provided.

Listen and act, and don’t ask me about my effort. Two of the Qantas gate agents handed me business cards with a customer service feedback line to register our upsetting experiences, but as I have written two years ago in “Don’t ask, know!” Qantas already had most, if not all of the customer journey mistakes that it made (delays, down-grades, lost wheels, IVR hold time, etc.) so it could easily extract the data and figure out how to intervene, offer an alternative, apologize, and in other ways try to right the ship. Big Data and predictive analytics can be deployed to produce customer effort scores (CES), NPS (as I showed earlier, a -1), and satisfaction levels.

Make it easy for me. We were all kept in the dark about the need to find our own hotel rooms. Later when we queued up for instructions and rooms, there was no announcement about what to expect nor when the rooms ran out. A couple next to us from Tasmania had not called around for a room so I called Hyatt back and found one for them, too, and the four of us headed to San Francisco for what our UK colleague Peter Massey calls “sleep fast”.

Value me. Some of were very frequent flyers on Qantas or partner airlines, but the staff handling the gate and the eventual vouchers never separated passengers into Business Class or more manageable queues. There have been no acknowledgments of the problems that we faced, no apologies, no IVR prompt for Business Class travel, and no compensation which all clearly conveyed “We don’t care”.

Empower its crew and customer service team, and don’t make me have to navigate the organization. In addition to the delays and lack of communication, I had to call Qantas to reschedule our connection (that was on a separate ticket). At 4 am I suffered through a 35-minute call to Qantas’ reservations line including 11 minutes before I was connected, and three holds while the agent had to check with the re-booking desk. This should have been a 3-minute call if the IVR had prompted for Business Class in addition to Qantas frequent flyer number, and if the agent was empowered to make the changes!

After this series of misadventures my wife told me “Let’s not fly Qantas again.” Not only did I tell >50 participants in our LimeBridge business events in Sydney and Melbourne about our experiences, and I’m sure that they’ve told others, but I then changed our planned final flight from Melbourne to Singapore from Qantas to Emirates.

1 We introduced “You make it easy for me” in our 2nd book Your Customer Rules! Delivering the Me2B Experiences That Today’s Customers Demand (Wiley/Jossey-Bass 2015). Here are the 7 Customer Needs that Lead to a Winning “Me2B” Culture; each Need breaks down into a total of 39 Sub-Needs.

2 We profiled the importance for companies to “Be proactive” in our 1st book The Best Service is No Service: How to Liberate Your Customers From Customer Service, Keep Them Happy, and Control Costs Bill Price & David Jaffe (Wiley 2008). Based partly on my years as Amazon’s 1st WW VP of Customer Service, but also on “Best Service” providers around the world who have made it easier for their customers to do business with them, we proposed 7 Drivers that start with “Challenge demand for service”:

5 Spreadsheet behind the 26-step customer journey: 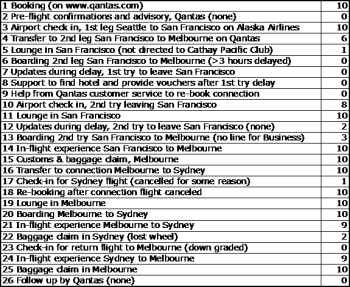