Summary: a CMO Council survey shows that CMOs and CIOs agree they need to cooperate, but disagree on how well they’re doing and what their roles should be. Both sides need to work harder to close an increasingly-unacceptable gap.

The CMO Council and Accenture Interactive recently released a study Aligning the CMO and CIO to Achieve Agile Intelligent Marketing based on parallel surveys of about 300 members of each group. The free 32-page summary provides a detailed analysis and commentary. Key conclusions are:

“While customers have now broadly and deeply embraced new digital and social media channels of engagement, interaction and transaction, most senior marketers and IT executives admit their companies lack a clear understanding of how customers are using their channels and are not highly prepared to leverage those channels. Meanwhile, the relationship between marketing and IT too often remains dysfunctional, with marketers complaining about insufficient support from enterprise IT departments, and IT complaining about marketing departments that forge forward with technology implementations without IT involvement. While marketing believes customer intelligence is critical to competitive advantage, it is struggling to gain IT support and budget for better integration and mining of disparate customer data that is often isolated and under-utilized across organizational silos.

“Yet, there is also significant common ground on which to build a new era of cooperation and synchronization between marketing and IT. There is mutual agreement on the central role technology now plays in defining the customer experience, delivering strategic customer insight, and in reaching and engaging a digitally driven marketplace.”

The CMO Council generously shared the detailed data with me. This provided hours of amusement as I recrunched the numbers from my own perspective. I’ve included some of results below with their permission (although of course the interpretations are my own). If you care about these issues, it’s well worth $199 to see the rest.

CMOs and CIOs agree they need to work together, and why. Both cited customer insight and analytics as top reasons to work together. Marketing measurement and ROI rank lower, although CMOs care about them more than CIOs seem to think. 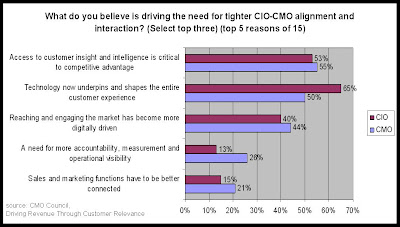 They also agree they have much work to do:

But the relationship is far from perfect.

CMOs and CIOs often blame each other for failures.

– Many more CMOs than CIOs said they had “problems or challenges implementing marketing solutions or IT projects to further marketing effectiveness” (64% of CMOs vs. 48% of CIOs). That is, marketers are less happy that IT realizes.

– CMOs blamed failure on lack of IT priority, lack of IT expertise, IT keeping marketing “out of the loop” and IT resistance to solution sourcing.

– CIOs blamed failure on marketing bypassing IT and working directly with the vendor and marketing taking control and isolating IT.

– Both groups did agree on other causes including insufficient funding, lack of time and technical resources, solution complexity and lack of management support. 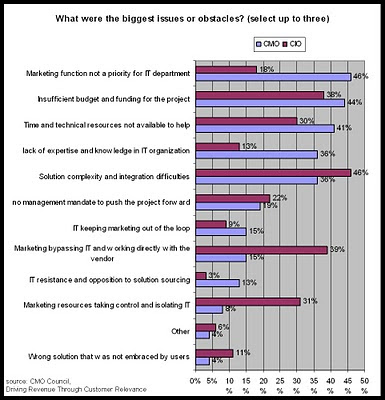 – CIOs were much more likely to base selections on consultation with technical groups (enterprise IT, web, contact center and back office) and somewhat more dependent on vendor interactions at conferences.

– CMOs rely more on consultations within marketing, including internal meetings, strategic planning and audits and assessments. But the CIO figures are still fairly high: CIOs are not ignoring marketing’s input, although marketing may be largely ignoring IT. 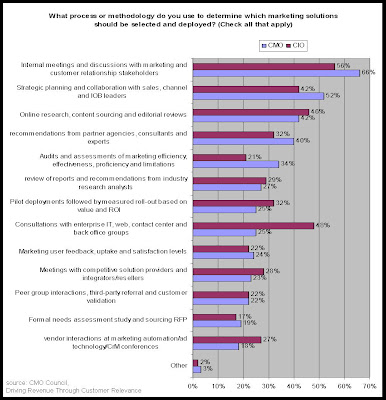 CIOs are less in tune with digital marketing efforts than they think – and CMOs know it:

– CMOs were nearly twice as likely as CIOs to feel their company is growing its digital marketing spend (35% of CMOs vs 20% of CIOs).

– CIOs were much more likely than CMOs to feel that IT was playing a major leadership role in digital marketing strategy. But the majority of both groups also listed the CMO as a digital marketing leader. Near-majorities also credited senior management. 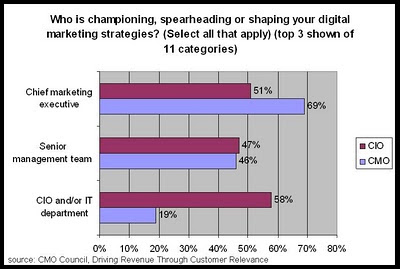 CMOs and CIOs disagree on the CIO’s job.

– CMOs take a limited view of the CIO’s role. Mostly, they want the CIOto handle the mechanics of data and integration. 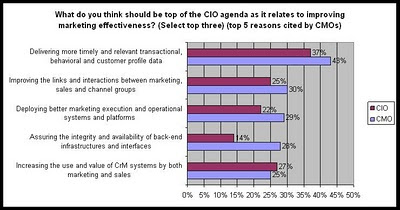 – CIOs agreed that better data was their first priority, but otherwise felt they should focus on new types of systems and interactions. They show particular interest in social media. 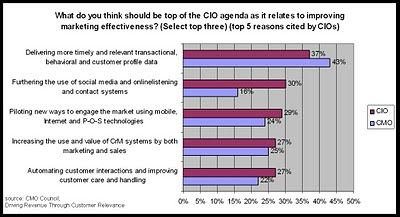 CMOs and CIOs have different views of spending, too.

– CMOs and CIOs agreed that they spend the most on operational activities including email, Web analytics and CRM. But…

– CMOs reported much more spending on campaign management, marketing platforms and marketing analytics than CIOs. Either the CIOs aren’t paying attention to marketing systems or the CMOs are spending money outside of IT. Or both.

– CMOs also reported more spending on email and search marketing than CIOs. That makes a bit more sense: much of that money doesn’t flow through IT.

– CIOs reported more infrastructure spending such as content management, data warehouse, customer interactions and call centers than CMOs. That one also makes more sense since many of those items fall outside of marketing. 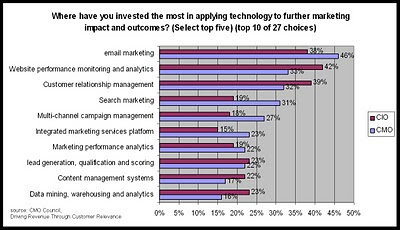 – Spending on marketing performance analytics (22% of CMOs) was more common than spending on ROI modeling and performance measurement (11%) . Could be another labeling issue – or maybe ROI is more specific, more demanding and less common. You decide.