My earlier article on this topic looked at specific actions individuals and managers could take to ensure a level playing field for both men and women on their sales teams. Without rehashing all of it, the high points, especially for female reps, were:

Among the comments received were that this was putting a good deal of the leveling burden on individual reps, and suggesting senior management take responsibility for ensuring fairness as well. Following are two examples, one a CEO, the other a governmental policy, and then a personal experience of mine that illuminated something else.

One of the more notorious examples, making headlines 2 years ago, was the Dallas Mavericks basketball franchise. Sports Illustrated broke a story of domestic violence and sexual harassment creating a toxic workplace culture. Cynthia Marshall was brought in as the new CEO. She immediately outlined three primary areas of focus in her plan to address the franchise’s issues: an independent investigation, cultural transformation and operational effectiveness.

If you replace “independent investigation” with “transparency,” these three items would sound familiar in almost any B2B setting. The prior article talked about the need for transparency. Looking at the second attribute, Marshall described cultural transformation to mean following through on “fostering an inclusive and supportive culture in the organization.” She vowed to create a culture of respect and fairness for all cultures and genders.

Can anyone argue with these aspirations? Would anyone say they want a lack of respect and/or an unfair culture? Of course not, yet, pay and promotion disparities continue. At the executive level, we suggested conducting an audit of pay to assure equality—equal pay for equal work.

But Marshall has gone on to establish a “zero tolerance” policy for harassment of any sort. And she put a plan in place. She said:

I want us to be a model—here’s what to do when this happens. Here is how you make employees feel safe. Here is how to transform a culture to include diversity and inclusion. Here are the operational systems to put in place to make sure the process works for employees. I want us to be that model for how to do this. And we will be.1

Marshall put together a “To Do” List of 200 items to be completed within her first 100 days. Under “Culture Transformation,” were:

Clearly, this CEO is not just saying the right words, but outlining specifics to see these things happen. If you want to hear Marshall’s presentation at the Maker’s Conference (Feb ’20) click here. 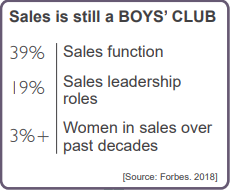 At the government policy level, two examples were eye-opening for me. Finland, which has the youngest world leader (Sanna Marin—34) requires by law that 40% of employees be male (e.g. nurses) or female (e.g. programmers). And unequal pay for the same work is strictly illegal—with associated fines for violations.

In Sweden, parents are jointly given 480 days of parental leave; up to 90 days of this total have to be taken by each parent; the remaining 300 days can be taken by just one or split between the two. As a result, the stigma of taking time off for early childcare has largely been eliminated and the statistics are telling. 73% of women work, only 3% lower than men. However, because of the length of transferable days (i.e., up 150 days) that are most often shifted to mothers, women still suffer reduced career progression and a 19% wage gap.2

Marshall’s “Value Based Employment” ensured equal pay for equal work. And it may be instructive to inquire about and/or offer input on your company’s parental leave policies. Is there a process for covering a rep or manager’s territory while on leave? Is there resentment or stigma attached to an individual (man or woman) taking a lengthy leave to care for a newborn or an elderly/failing parent?

The Value of Diversity

If all this seems too abstract or remote, here is something much closer to home, literally.

This past weekend, I had a large (3’ x 6’ x 2’) and heavy (300#) crate loaded into the bed of my pickup truck. It was clear that once home, it would take more than a couple of people to unload it. My stepdaughter and her boyfriend were visiting, and I was also able to recruit a couple of neighbors in the effort. Spoiler alert: we got it off the truck and moved to a staging area without incident.

Later that afternoon, Amy said the experience was “scary” and felt we could/should have had a team meeting to discuss what we were doing before launching into doing it. Specifically, what the game plan would be if something went wrong.

This is an example of the value of diversity. Divergent and different ways of approaching a problem. In fact, while lining up my helpers, I had thought about what might go wrong and was prepared to tell everyone, “Look, just drop it and run if anything goes sideways. It’s not worth injuring your back or losing a couple of toes for a stupid bathtub.”

But, here’s the interesting/tricky thing. Once we were all together, my directive, engineering self, took over and I just started outlining what each person was to do. I didn’t offer the coaching I had earlier thought about and didn’t ask for any input before starting. Amy had fears and concerns but did not feel comfortable voicing them to the group.

And, yet, she was perfectly right, and I would have appreciated her doing so!

I think I’m pretty tuned in but recognized that my task-oriented macho/leader self, shoved my team-oriented caring/coaching self aside. And, even in what would seem a fairly neutral and safe setting, my stepdaughter felt intimidated to speak up.

This is why I’m saying equality is so tricky!

Diversity is a good thing and having operational systems and processes in place to take advantage of it are even better. I had a diverse team assembled but lacked a process—or the awareness—to ask if anyone had any questions or input before we started. Building this consciousness into daily routines can help reduce these missed opportunities. Having a meeting checklist, to remind one to verify the agenda, ask for additions, concerns, and input throughout, and asking at the end if everyone got what they needed, would help consistently engaging every team member.

At some point, you may ask, “What’s so good about diversity anyway?” Let’s face it; homogenous groups can move faster because there’s more consensus and easy agreement; said another way, these groups are less contentious and typically have less debate. Great, time is money! What’s wrong with moving quickly? The answer is not that inclusion/diversity is the “right thing” to do, or a moral mandate. It’s actually much more basic and I learned this while visiting the Napa Valley wine area.

The answer is sustainability, or even more primal, survivability.

In addition, having different varietals ensures that an entire crop will not be wiped out by a disease that preys on a specific type of grape.

Creating a Culture of Respect and Fairness for All 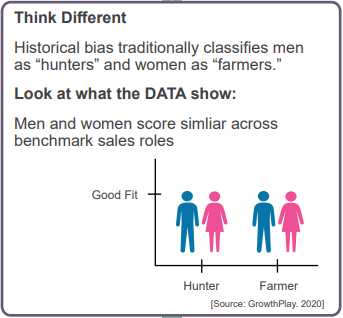 The same is true for teams. Yes, having everyone think the same way can ease decision-making but it can also lead to you all driving off a cliff because nobody was early on raising a red flag. Are you open to inclusion, or do you, as Hillary Clinton suggested in a recent interview, “have little subconscious alarm bells going off,” when a woman wants to step up to a leadership role?3

If you want to test whether you have a built-in bias, take this online test created by AAUW, Project Implicit and Harvard University.

Creating a culture of respect and fairness for all cultures and genders is everyone’s job. Individual reps, especially women, speaking up and asking questions. Managers developing checklists and processes to consistently include all voices, recruit all types, engage all team members. Senior sales and company leaders saying the right things and backing up their words with specific “To Do’s,” being transparent, and modeling the behaviors they aspire for all. 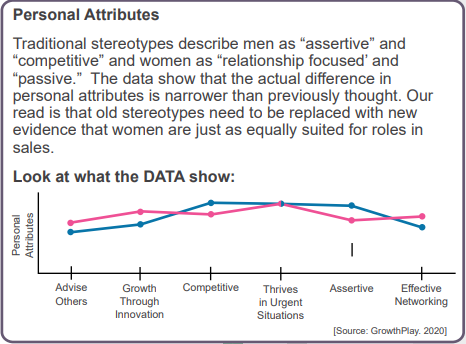 The addressable market for your products/services is hard to quantify and so is estimating the untapped potential of your team members. But if you’re wanting customers/prospects to engage with your sales organization, then doesn’t it make sense that the members of your sales organization, have themselves, to be engaged? And remember Peter Drucker’s aphorism: Culture eats strategy for breakfast. Building a culture of respect and fairness would seem axiomatic—but not automatic.

Despite good thoughts and inspiring words, women still lag (see earlier Forbes graphic) in sales rep and leadership positions. There is plenty of room for improvement and plenty of evidence that diverse workgroups create better solutions.

Volumes have been written about the “power shift” from sellers to buyers as a result of information available on the Internet. An equally seismic shift is, and should be, occurring, to eliminate harassment, minimize bias, and leverage the amazing potential of a truly inclusive team.

2. 2019 Organisation for Economic Co-operation and Development