I’m putting the finishing touches on the CCO Council 2014 Tenure Study and am excited to share a sneak preview. For the last four years, I have examined the role of the Chief Customer Officer to understand the context within which CCOs are functioning and the future of the role, specifically as these relate to the development and execution of potential CCO career strategies.

The CCO Council defines a chief customer officer as the customer-facing executive who is ultimately accountable for customers and who is driving customer strategy at the highest levels of the organization. This eliminates middle-level to senior-level executives who may be customer centric and even responsible for customer experience within their organizations, but who don’t appear to possess sufficient authority to act and influence across organizational boundaries.

The average chief customer officer tenure increased again to 34.5 months, up from ~23 months four years ago. The lengthening tenure reflects in part the fact that mobility was severely restricted during the years following the recession. As well, enterprise CCOs weathered the recession far better than those in small companies.  Most importantly, this increasing tenure speaks to the growing recognition of the value of the CCO role and its increasing stability. Nevertheless, as the newest member of the C-suite, it remains the most fragile role, trailing the CMO by ten and a half months. As a side note, there is an interesting flaw in the way that Spencer Stuart computes the CMO tenure. If the CCO tenure were computed in the same fashion the average CCO tenure would be 3.2 months. Look for more detail in the upcoming tenure study results. 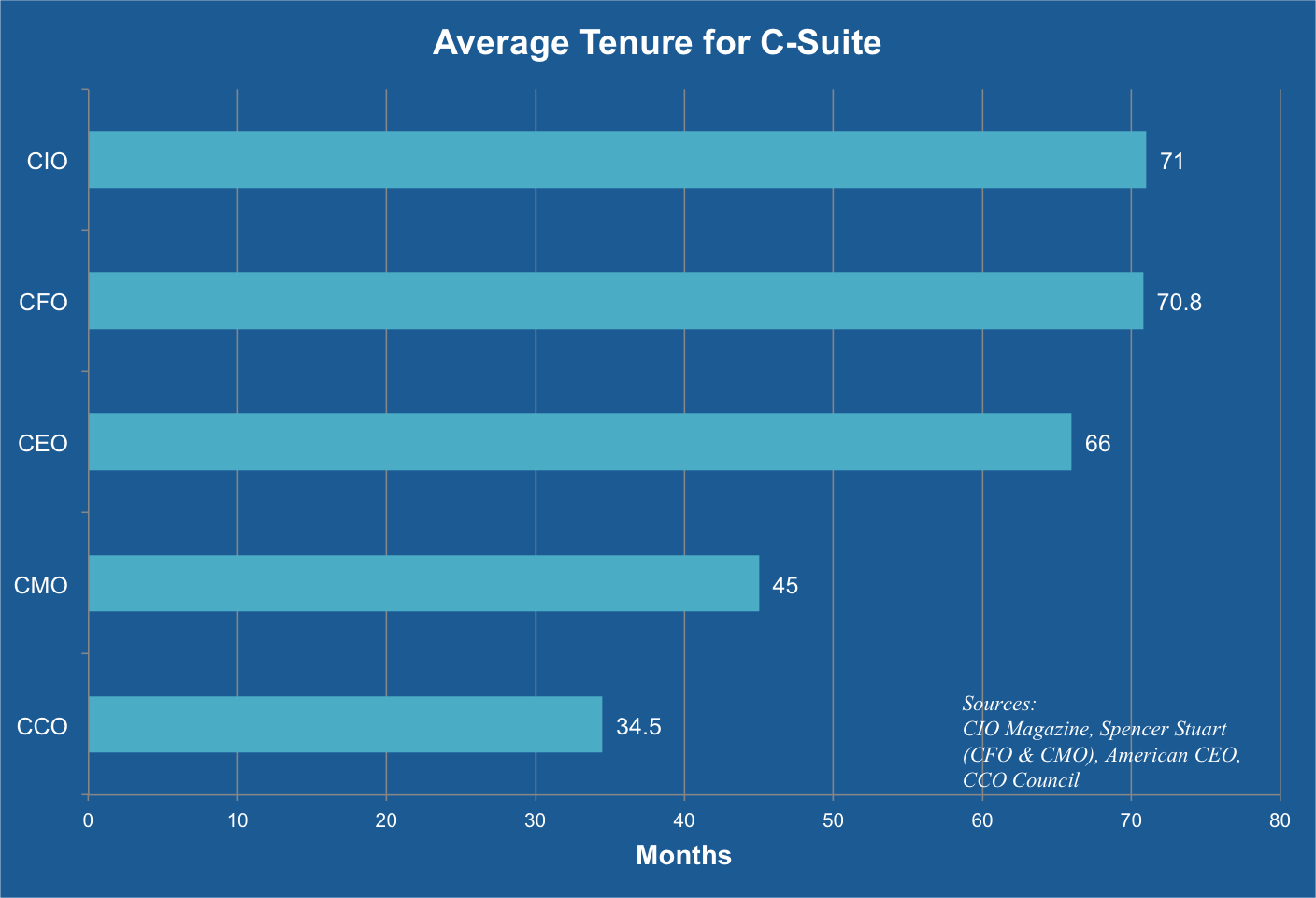 One of the more exciting findings is the lengthened tenure of members of the CCO Council. Where average enterprise tenure is 34.5 months, tenure of Council members is a whopping 54.2 months. CCO Council members are demonstrating significantly greater ROI as they elicit greater executive commitment and involvement, demonstrate a clear impact on executive objectives, and incorporate customer strategy into the overall corporate strategy. As well, they enjoy significantly greater influence over the rest of the organization as they balance business and customer needs.

Another significant finding of the study is that for the first time, CCOs are enjoying an unprecedented mobility. When I first began the study, the CCO role was terminal-they retired in the role and there wasn’t a career path available. Now, however, the CCO is being promoted to COO, CEO, or president of a business unit. This is indicative of the increased importance companies are placing on their customer strategies in requiring that executives have substantial customer roles. Executives and boards are beginning to recognize the value of the chief customer officer as a stepping-stone into roles of greater responsibility and authority. This will be covered in greater depth in the forthcoming study.