In the elusive hunt for ways to improve business-to-business (B2B) sales productivity, it’s tempting to conclude that something’s missing. As Scott Santucci noted at Forrester’s inaugural Sales Enablement Forum, in the tech sector there’s been a 9 year growth in the spend on sales and it’s been accompanied by a steady 9 year decline in margins. It doesn’t take a rocket scientist to conclude, ‘Houston, we have a problem.’

Neil Rackham shared with me a couple of years ago that some of the world’s largest firms are sufficiently concerned about declining B2B sales productivity that they’re spending millions of dollars mining their sales data in a hunt for the keys to more reliabily predicting Returns-on-Investment in sales. My instinct is that their data, much of it having been self-reported by sales people, will only marginally improve the predictability of sales ROI. As the old statistical saying goes: garbage in, garbage out. 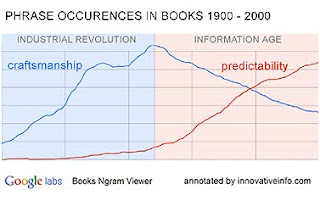 We’ve been living through an era in which capturing information, automating processes, and improving prediction has produced enormous benefits. Could it be, however, that it hasn’t benefited processes – like sales – in which the core work is still very much person-to-person and the outcomes aren’t directly in the control of employees? Could it be if we were to focus harder on craftsmanship in sales execution, creating real value for buyers, the outcomes would still be out of our control but success would become more predictable?

This strikes me as just common sense. It’s just not common practice.