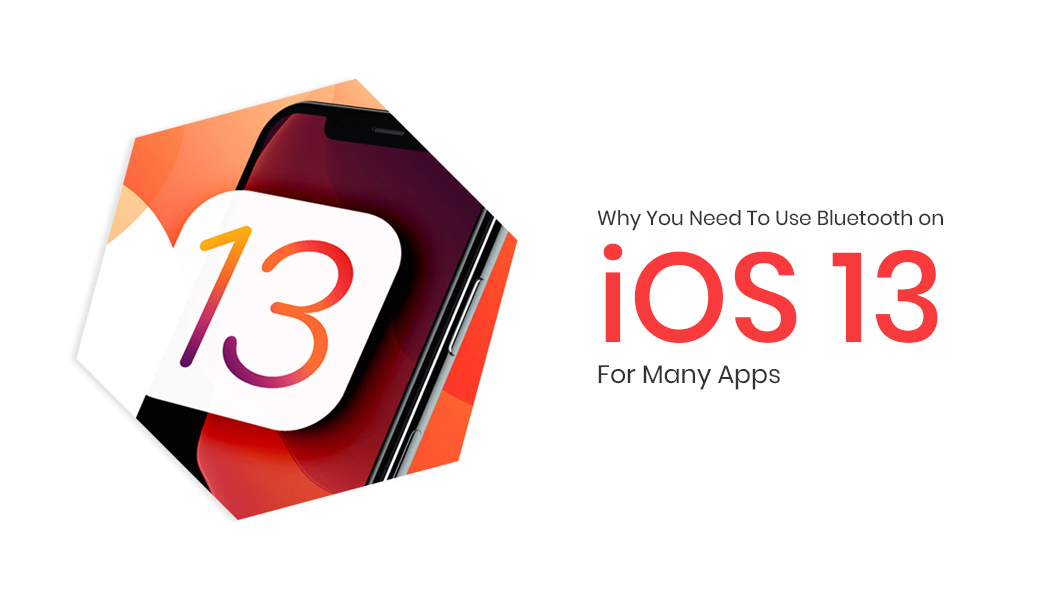 Apple has now introduced a permission feature that controls the access of Bluetooth by other apps. Just like an app asks you before it gets your location through GPS or before it accesses your contacts, now an app has to ask you before it taps the Bluetooth radio. Any apps that previously accessed Bluetooth without requesting for permissions, now, they are asking for the permission. If you want to resolve issues with iOS, you can hire iOS app developers to help you out.

People who have installed iOS 13 on their smartphones are now finding that a batch of notifications are coming in alerting them that third-party applications want to access Bluetooth and need permission to access location through Bluetooth. Many apps are also asking to gain permission to use Bluetooth accessories. You are mostly not sure whether you should or shouldn’t allow these permission requests.

iOS 13 has made improvements in its privacy and the task of apps asking permissions to access Bluetooth in both iPadOS and iOS is part of that privacy initiative. What you may realize is that you didn’t have these requests before, but the apps that are requesting now actually did access Bluetooth before. This happened without your knowledge and it could have issues with privacy and security.

An important thing you need to know is that the apps that are now asking for permission haven’t changed or they have been using Bluetooth on your phone before the arrival of iOS 13 and iPadOS. In the past, a phone user would not be notified when an app is accessing Bluetooth on their phone. Instead, the phone granted the access in background mode, and that’s why you wouldn’t know there is something happening. So, those apps you are now seeing popping up and asking whether they can use Bluetooth on iOS 13 mostly likely were already using it.

An iOS development company needs to mind about the users of the products so that their rights are not infringed.

The issue of access of Bluetooth by apps has some unresolved debate. Developers may not be telling us the reasons, however, let’s analyze some of them. Let’s take for instance, Spotify makes use of Bluetooth to help recognize when you are on connected to your car stereo. It does this so that it can be able to switch to Car View. In a similar manner, Google Maps makes use of pins to detect the location you got disconnected from the car stereo so that it marks where you probably parked. As you can see, these are positive reasons why developers would allow apps to access Bluetooth.

Besides, apps like YouTube and some other video apps try to connect to dongles such as ChromeCast using Bluetooth. You also find other apps that use Bluetooth to get connection to storage devices, headsets, and other accessories.

Should You Allow Apps To Access Bluetooth on Your Device or Shouldn’t You?

It’s important to take some time before you allow an app to gain access to Bluetooth through your iPhone. Try to ask yourself why the app would be doing that and if you trust the developer of the application. You may want to deny access, if you don’t know the reason the app is wanting to access Bluetooth or if you are suspicious.

Why Apple Put in Place This Bluetooth Access Permission Feature

At the WWDC 2019, Apple said that the reason it introduce the permission request feature for Bluetooth app is to shut the door on abuse of Wi-Fi and Bluetooth. This could also be the reason why you also want to stop and think before you grant permission to an app to access Bluetooth through your device.

Apple may have realized that Bluetooth allowed companies or app vendors to sneakily track the location of users over Bluetooth with use of beacons within shopping malls, stores, and popular streets if located in a place that a user would walk by. A beacon can easily be able to detect the Bluetooth chip on a user’s device and log it with another app on a phone or log it with a retailer or store.

By Apple being strict with Bluetooth access seems to be a good move since it helps prevent unwanted tracking of Apple customers. Apple is also becoming more serious and transparent about the issue for location tracking which doesn’t impress many of its customers. The company is even showing users on a map how frequently an app has recorded their position or where an app recorded the user’s position. This move by Apple will help phone users to slim down the list of applications and programs that can be able to monitor the locations they are in.

Some users will assume they should give permission for media apps or music apps to access Bluetooth in order to be able to continue using Bluetooth headphones, speakers, or earbuds. That is a reasonable assumption when you see a music or media app requesting for permission to gain access to Bluetooth. However, you don’t have to grant permission to an app just because it is related to Bluetooth in content streaming. Just to be clear, it is not a must that you grant permission to such apps, or even any app. You need to know that Bluetooth audio function is handled within the system settings and it is separate from apps. The audio feature of the Bluetooth will continue to function even when you deny a music or media app permission.

It is also possible that you will see Bluetooth permission request prompts from fast food chains and stores that would want to use beacons to do in-store promotions or assist a user find whatever they are searching for in a suitable aisle. A dedicated iOS developer wouldn’t make an app that intrudes on the privacy of phone users as has happened with apps that are using Bluetooth to monitor or track locations of people.

As the subject of Apple introducing the permission feature for Bluetooth access gets debated and answers are put forward, users at this time need to be cautious about whom they grant permission to use Bluetooth on their handheld devices. They should decline, and if they find that a feature of an application or program has been disabled because they didn’t grant the permission to access Bluetooth, then they can revert and grant it. If you deny an app the permission and realize that you indeed need to give the app access, you can go to Settings, then to Privacy, and then to Bluetooth. Here you can change the permissions.