(This post is an updated version of an article I originally published four years ago this month. Since the Winter Olympic Games opened last week, I thought it would be appropriate to revisit this important topic.) 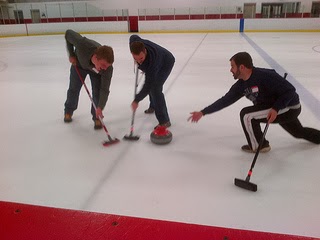 The 2014 Winter Olympic Games began last week in Sochi, Russia, and I've already watched some of the curling competition. I'm not really sure why I watch curling, because it's definitely not an exciting sport. If you're not familiar with curling, it's a little like shuffleboard. The big difference is that curling is played on ice and involves sliding a polished granite stone weighing about 40 pounds toward a target painted on the ice. The playing surface is prepared by spraying water droplets (called "pebble") onto the ice. Because of friction between the stone and the pebble, the moving stone will turn or "curl" to one side or the other.

After one team member "throws" the stone toward the target, two other team members accompany the stone as it moves down the ice and guide it toward the desired position on the target. The catch is, these players are not allowed to touch the moving stone. Instead, they use brooms to sweep the ice in front of the stone. Sweeping temporarily melts the top of the ice and thus reduce the friction between the stone and the ice. By reducing the friction, sweeping changes both the speed and the direction of the stone. So, knowing when and how much to sweep is a critical skill in curling.

In some ways, curling is a good metaphor for the job confronting today's B2B marketers and salespeople, particularly those involved in selling complex or expensive products or services. As I've written before, B2B buyers are now firmly in control of the buying process. They determine when and how they will access information to learn about business issues and possible solutions and when and how they will interact with potential suppliers. They also decide how quickly they will move through the buying process.

In these circumstances, the first job of a marketer is to persuade a potential buyer to begin an active evaluation process that may lead to a purchase. Through a combination of inbound and outbound marketing tactics, your objective is to convince the potential buyer to focus his or her attention on the business issue, challenge, or problem that your products or services can address. The execution of these marketing programs is the equivalent of "throwing" the stone in curling.

Once you've gained the attention of potential buyers, your most important job is to provide them the information they need when they need it. Like the sweepers in a curling match, your primary job is to reduce the friction that slows prospects down and causes them to veer off course. You would like to be able to directly lead your prospects through the buying process, but that would be the equivalent in curling of touching the stone, and that's against the rules. In today's B2B buying environment, attempting to push your prospects through the buying process toward your desired objective on your schedule just doesn't work - at least not very often.

The good news is, you can address many causes of friction with the right marketing content and selling skills. If you consistently provide potential buyers useful and valuable information that is appropriate to where they are in the buying process, you can help them move more easily and quickly through the process and, even more importantly, make better buying decisions.

Photo Credit:  kbmaloney via Flickr. Used by permission under a Creative Commons license.