Advertising is an easy way to generate more brand awareness, traffic, and engagement, but audiences are bombarded by ads from all sides. They use ad-blockers to avoid them completely, and the ones that do show up in their feeds are rapidly ignored. So, how do you reach these people? How do you generate more customers for your business without spending all of your marketing budgets on ads?

In this blog post, I’m going to show you how to use micro-influencers to promote your business.

Who are micro-influencers and why should you care?

A micro-influencer can have anywhere from a few thousand followers to a few tens of thousands – there’s no exact limit, but generally, it’s under 100k followers on social media.

Micro-influencers have recently become very popular in the marketing and business world because many businesses – including huge global companies – have realised how powerful their influence can actually be.

In fact, in some cases, their influence makes more of an impact than a huge influencer who has millions of followers.

So, why exactly is that? How do people with a few thousand followers on social media make this much of an impact?

What to look for in a micro-influencer

What makes for a good micro-influencer? How do you find the right people to work with?

Here’s what to look for in a micro-influencer:

To find social influencers more easily, you’ll need to use a good influencer marketing tool – i.e. one that allows you to search for influencers based on their content and their audience and that provides engagement stats.

Try using tools like Upfluence, which allows you to create very in-depth searches, including analysing their audience (their location, ages, gender) and their engagement levels to find more appropriate influencers for your needs: 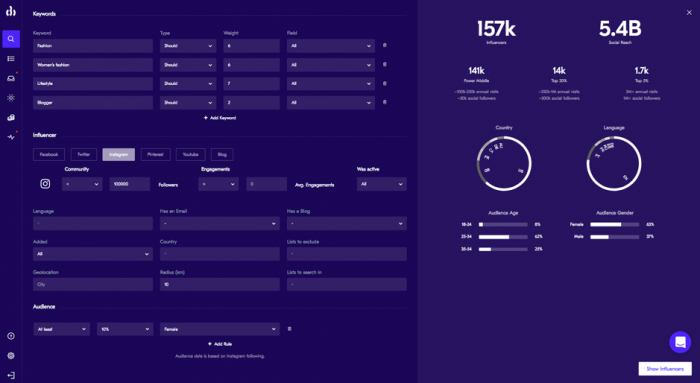 Or like Buzzsumo, which allows you to search for influencers based on their bios, the content they share with their audience and also lets you see at a glance what their engagement is like:

How to use micro-influencers to promote your business

There are a lot of ways that you can work with micro-influencers to promote your business – from one-off projects to long-term campaigns.

Here are some of the best ways to use micro-influencers to your advantage:

For one-off projects, you can leverage the influencers’ clout and reach to promote your blog/website, and your products or services with product reviews and sponsored posts.

For example, you can send them free products/experiences with your services  and discuss the possibility of a sponsored post on social media, or of a product review on their blog.

But, in most cases, you’ll have to also pay them for their services as this is one of the best ways that a micro-influencer monetizes their reach.

Try to work with influencers that genuinely like your products or service; and most importantly, let them be authentic.

Another way to build powerful influencer marketing campaigns is to turn the influencers you work with into your brand ambassadors.

This is a long-term strategy and one that can yield amazing results for your business.

One of the best examples of this tactic in practice is the way clothing giant Asos uses Instagram micro-influencers to promote their products.

They have anywhere from a few thousand followers to around 100k and they help generate thousands of likes and comments for the popular brand.

For example, Syanna Laniyan, a French Asos Insider posts images with her wearing different Asos products regularly and generates over 500 likes on all her posts:

She’s one of many such insiders helping promote the brand – both women and men.

Brands can also send micro-influencers their products (or services/experiences) in order to generate social media buzz about them through user generated content.

One of the best examples of this tactic in action is the #LetHawaiiHappen campaign from the Hawaii Tourism board.

They partnered up with micro-influencers who were locals of Hawaii in order to spread awareness of their campaign through beautiful images of real experiences. Over the year, they generated 100k posts on the subject and have found that the majority of the people who saw their campaign (65%) planned a trip to Hawaii within the next year – you can read more about their results in the study I linked to above.

Micro-influencers can prove to be an incredibly powerful tool for brand awareness and generating engagement and new customers for your business – more so even than some of the top influencers in the world.

So, what kind of campaigns would you start with micro-influencers?