I thought it might be my imagination, but Google Trends confirms that “build vs buy” really is coming up more often these days that it had in recent years. 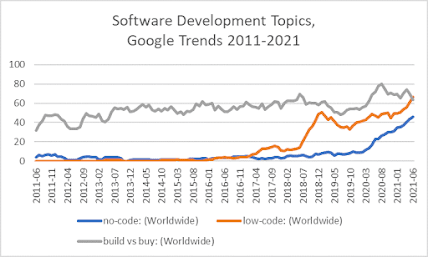 This surprises me, since I had thought that debate was over. It seemed that most organizations had accepted the default position of buying when possible and building only when necessary.

In the world of customer data management, I’d say the reason for the new interest in building systems is that corporate IT is more involved than before. Remember the growth in marketing and sales technologies was due mostly to the fact that marketing and sales teams could often buy what they wanted as a Software-as-a-Service subscription, with little or no involvement of the central IT team. Marketing and sales leaders had no interest in building software, and even martech and salestech groups were more oriented to selecting and implementing systems than building their own. But as customer experience rose to become a primary corporate priority, a trend accelerated by the pandemic, it became more important to integrate marketing and sales systems with the rest of the company. Privacy rules created a parallel pressure for corporate-level involvement. And corporate IT groups are much more likely to at least consider building their own system.

It’s a less obvious why interest in build vs buy should have also grown in the broader IT world. One possibility is that the growth of low-code and no-code options made building your own systems more attractive alternatives. I can’t really say the Google Trend data bear this out, since the dip in build vs buy interest happened after the initial growth in low-code development. The correlation is better for no-code although there are probably other, equally plausible explanations.

What’s more important is that no-code and low-code do change the terms of the build vs buy debate. One way to think about this is to break the software development process into four main components and see who does what under each approach. Those four components are:

You can visualize the four development approaches as a column chart showing the distribution of work by department:

Beyond these specific propositions, I think it’s generally helpful to break a project into these components when thinking about the right development approach. They’re all important and are different enough to treat separately to ensure they’re all considered. If you have other thoughts on how to apply them, or can offer a better approach, please share your comments.