Recently, Forrester Research (one of the most influential research and advisory firms in the world) studied more than 3 million user interactions with more than 2,500 brands posts on seven social networks. They confirmed what marketers have suspected for quite some time, which is people aren’t engaging with branded social content anymore.

Forrester revealed that six of the seven top social networks achieved an engagement rate of less than 0.1 percent for brands.

If you’re already spending thousands or millions on ad managers, Ad Words, and other promotional tools, this realization has HUGE implications. But even if you already knew this statistic, where do you look now to achieve the results you desire?

The Shift From Social Sites To Affinity Platforms

In July 2008, Apple released the IOS 2.0 for iPhone users. With its release came the now widely known App Store which introduced the world to a large variety of downloadable third-party apps. These apps ranged from games, entertainment, and apps that helped us with productivity in business and everyday life.

These apps and platforms also gave birth to affinity groups which allowed users today to log on and connect with brands, influencers, and causes that they had a personal or emotional connection with.

Brands such as Uber, Airbnb, Skylab, and The American Red Cross Association are great examples of affinity groups out there nowadays. These companies are often associated with providing a product or service to certain groups of people.

People aren’t logging on to these to talk to their grandmas or check on what their friends are doing on the other side of the world. That’s what Facebook and Instagram are for as you know. Companies such as Uber and Airbnb are for large groups of like-minded individuals focused on receiving a service they wouldn’t otherwise receive elsewhere.

But something you might not know is that there are platforms such as Ultimate Life and Allysian that take the best aspects of social and leave behind the baggage.

These companies are helping thousands around the world with their products and services.

More importantly, they’re leaping beyond what social media platforms have to offer and applying the Science of Engagement to their tribes.

The problems with social media today is that content is often truncated and there’s too much noise that has nothing to do with you. It’s difficult to drown it all out and simply connect with an audience of your choosing. Ads have become an everyday occurrence from the moment that you open a site or an app.

Social media went from a place where we can connect with others from a distance to a place where we’re beginning to feel disconnected from what matters the most to us. Not to mention the constant bombardment of political shaming. This is where affinity group platforms come into play.

A Value Reinforcement System (VRS) Is The Answer

For those who aren’t familiar with a Value Reinforcement System, VRS was designed by Skylab to allow affinity groups to harness the power of Contextual Gamification strategies. It is also based on the theory of social cognitive learning.

People are looking for a place where they can connect with a group of people that have similar interests. In simpler terms, they’re looking for somewhere where their newsfeed provides a healthy slice of the information that they truly want (and is not overrun by advertisements that don’t benefit them).

People also want to be valued for their loyalty to a brand or influencer. Relationships aren’t just people connecting to people, they’re also about brands connecting to consumers.

At the end of the day, isn’t being valued the end goal of any relationship?

Micro-influencers such as CheerLife have taken note of the viable solutions that VRS had to offer and have partnered with companies that specialize in it to grow their community immensely.

CheerLife has now used this opportunity to utilize VRS to develop a personal relationship with their tribe of cheerleaders to not only train them to become better athletes but to become better people and to be socially responsible by serving other causes and communities.

The result is astonishing! 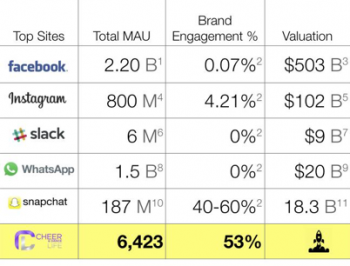 It’s so funny how social media was just this fun thing, and now it’s this monster that consumes so many Millennial lives. Cazzie David- Writer/Actress

Cheerleaders can learn through training modules, connect with other cheerleaders around the world, be rewarded with prizes, and potentially gain sponsorships by performing actions that they already do on a daily basis. This is called the Value Reinforcement System.

The point is this:

The concept of social media started with a great intention which led to the connection between billions of individuals. But as consumers, we desire more than that. We desire a personal connection between ourselves and the platforms we frequently visit.

This allows a brand or influencer to eliminate the noise so they can shape and reward the behaviors that help both brands and their communities to achieve their missions.

“It’s simple: today people don’t just want to be fans and follow you … they want to join your movement where they can take actions to make a difference.” Dean Grey– Futurist and Entrepreneur