The Customer Data Platform Institute released its semi-annual Industry Update today. (Download it here).  It’s the third edition of this report, which means we now can look at trends over time. The two dozen vendors in the original report have grown about 25% when measured by employee counts in LinkedIn, which is certainly healthy although not the sort of hyper growth expected from an early stage industry. On the other hand, the report has added two dozen more vendors, which means the measured industry size has doubled. Total employee counts have doubled too. Since many of the new vendors were outside the U.S., LinkedIn probably misses a good portion of their employees, meaning actual growth was higher still. 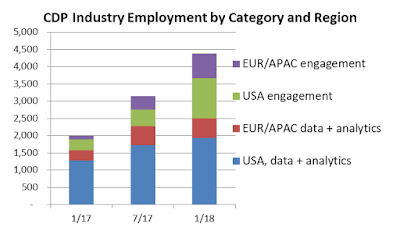 The tricky thing about this report is that the added vendors aren’t necessarily new companies. Half were founded in 2014 or later, which might mean they’ve just launched their products after several years of development. The rest were older. Some of these have always been CDPs but just recently came to our attention. This is especially true of companies from outside the U.S. But most of the older firms started as something else and reinvented themselves as CDPs, either through product enhancements or simply by adopting the CDP label.

Ultimately it’s up to the report author (that would be me) to decide which firms qualify for inclusion.   I’ve done my best to list only products that actually meet the CDP definition.*   But I do  give the benefit of the doubt to companies that adopted the label. After all, there’s some value in letting the market itself decide what’s included in the category.

What’s most striking about the newly-listed firms is they are much more weighted towards customer engagement systems than the original set of vendors. Of the original two dozen vendors, eleven focused primarily on building the CDP database, while another six combined database building with analytics such as attribution or segmentation. Only the remaining seven offered customer engagement functions such as personalization, message selection, or campaign management. That’s 29%.

By contrast, 18 of the 28 added vendors offer customer engagement – that’s 64%. It’s a huge switch. The added firms aren’t noticeably younger than the original vendors, so this doesn’t mean there’s a new generation of engagement-oriented CDPs crowding out older, data-oriented systems. But it does mean that more engagement-oriented firms are identifying themselves as CDPs and adding CDP features as needed to support their positioning. So I think we can legitimately view this as validation that CDPs offer something that marketers recognize they need.

What we don’t know is whether engagement-oriented CDPs will ultimately come to dominate the industry. Certainly they occupy a growing share. But the data- and analysis-oriented firms still account for more than half of the listed vendors (52%) and even higher proportions of employees (57%), new funding (61%) and total funding (74%).  So it’s far from clear that the majority of marketers will pick a CDP that includes engagement functions.

So far, my general observation has been that engagement-oriented CDPs appeal more to mid-size firms while data and analysis oriented CDPs appeal most to large enterprises. The explanation is that large enterprises already have good engagement systems, or at least prefer to buy such systems separately. Smaller firms are more likely to want to replace their engagement systems at the same time they add a CDP and want to tie the CDP directly to profit-generating engagement functions. Smaller firms are also more sensitive to integration costs, although those should be fairly small when CDPs are concerned.

There’s nothing in the report to support or refute this view, since it doesn’t tell us anything about the numbers or sizes of CDP clients. But assuming it’s correct, we can expect engagement-oriented vendors to increase their share as more mid-size companies buy CDPs. We can also expect engagement-oriented systems to be more common outside the U.S., where companies are generally smaller. For what it’s worth, the report does confirm that’s already the case.

But I don’t have to bet and neither do you. So we’ll just wait to see what comes next. It will surely be interesting.