For reasons that made sense at the time, I recently interviewed myself about the CDP Institute’s latest review of Europe-based CDP vendors.  Here’s how that went.

What do you think potential CDP buyers would find the most interesting stats from this?

From a buyer’s perspective, the most interesting stat may be the absolute number of local vendors available. We found 25 Europe-based CDP vendors, nearly one-third of the worldwide total. Marketers in UK, France, or The Netherlands can each pick from a half dozen vendors based in their country. This matters because markets still have considerable national differences. And I suspect that many buyers prefer to work with a local firm, especially for customer-facing functions such as personalization where knowledge of local buyers is important.

Buyers may also be interested in the market growth rate: the number of European vendors doubled, from 13 to 25, during 2018, while employment grew by 58% from 929 to 1,469. Cumulative funding grew by just 16%, suggesting that most growth is self-funded. We estimate total revenue among these vendors at €150 million in 2018. Revenue in Europe for non-European vendors is probably about equal to this amount. 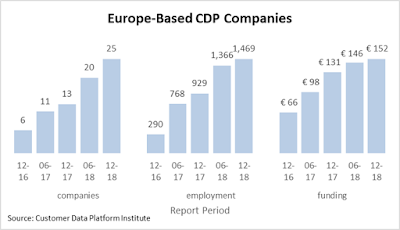 Are there significant differences from country to country?

It’s a bit hard to say about country differences because there are probably quite a few firms we don’t know about. For example, I’m aware of only one German CDP, which just seems very unlikely. And although our figures show that Netherlands-based companies are especially small, the reason could simply be that we have been more exposed in The Netherlands than elsewhere and thus are more likely to learn about small companies in that market.

What about the rest of the world vs Europe?

The differences here are clearer. Seventy percent of European CDP employees work at companies with campaign-type systems, meaning they can select messages for individuals in batch campaigns or one-on-one interactions. Just 43% of employees outside of Europe work at similar firms. The domination of the European industry by campaign CDPs is its most distinctive feature. I suspect that European marketers prefer campaign systems because European marketers have fewer technical resources than their counterparts in the U.S. Campaign systems help European marketers stretch their budgets because they include a broader range of features than other types of CDPs, reducing the need for additional products.

Are there other differences beyond campaign type?

Yes. European CDP companies are much smaller and less well-funded than those outside of Europe: the average European company has 59 employees and €6 million funding, while the average company elsewhere has 99 employees and €25 million funding. Averages can be deceiving but other measures tell a similar story. For example, only one of the ten largest CDPs is based in Europe compared with five of the ten smallest. The difference is actually greater than this suggests because most of the large European CDPs are old companies – four of the six with over 100 employees were founded before 2006. By contrast, just one of the fourteen non-European vendors with over 100 employees is that old. This means that the largest European CDPs built their business doing something else – mostly as marketing services agencies — while the largest non-European CDPs were CDPs from the start. (You’d need to look at the data in our global industry update, available here, for the non-European information.) 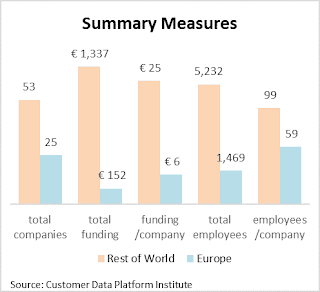 Are there any trends that might help to predict the future?

We assemble this data every six months so we get a good perspective on changes over time. The European CDP industry had been growing slightly faster than the rest of the world but in the recent period that was not the case: the European share of employment actually fell slightly. Another trend that had been clear was the steady shift of industry away from access vendors towards campaign vendors. But that also slowed during the most recent period and actually reversed outside of Europe, where analytics vendors gained share. This reversal suggests that different types of CDPs are finding success among different customer groups, meaning that the industry is not going to coalesce around a small number of vendors with similar features any time soon. That is different from the path that most industries take, where a dominant model and few leaders do tend to emerge fairly quickly. 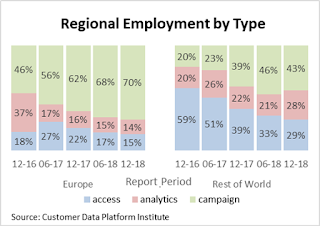 Data on industry concentration points in a similar direction: the share of employment among the top five vendors has fallen steadily over the past two years, and even the share of the top 20% of vendors (a number that increases as the industry grows) fell in the most recent period. 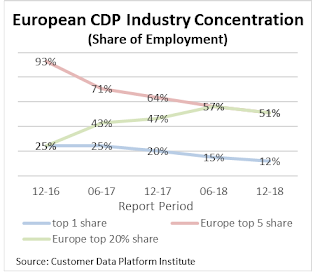 Over all, the report shows a vibrant, innovative European CDP industry that continues to grow by taking approaches that fit the special conditions of the European marketplace. U.S.-based firms, with much higher funding and a substantial technical head start, will not leave the market any time soon. But because the non-European firms are strongest in the data access and analytics categories, we see both sets of vendors coexisting and often even being used for different purposes within the same company.