From coffee to caffeinated energy drinks, our appetite for a jolt of energy during our workday is part of our history and everyday rituals. Entire industries are built on the behavior. According to a study of consumers’ caffeine habits published in Food and Chemical Toxicology, 85% of the U.S. population consumes at least one caffeinated beverage per day. Although coffee in its many forms is clearly the caffeinated beverage of choice, this study also included tea, carbonated soft drinks, energy drinks/shots, chocolate flavored milk and other beverages.

Quantitative evidence aside, how long were you willing to sit in line during your last visit to a Starbucks drive in… any questions?

Blame it on Kaldi’s Dancing Goats

It’s difficult to separate fact from popular legend but Kaldi, an 8th Century Ethiopian goat herder, is credited with the discovery of the coffee plant. Like many discoveries, it occurred by the chance intersection of an inquiring mind and observation. Kaldi noticed that his goats who were feeding on a certain shrub’s bright red berries were energized and danced the night away. Sampling the red berries himself, Kaldi experienced a similar effect. The rest is coffee history.

Energy drinks have been a segment of the soft drink industry from the beginning. Coca Cola —arguably the first “energy drink” — was the brain child of Atlanta pharmacist John S. Pemberton who in 1886 created a caffeinated soft drink, offering it for sale as a carbonated patent medicine at soda fountains (which were the precursor of today’s coffee bars minus the Pumpkin Spice Choco-Chai and WIFI access, of course). Who could have forecasted the 5 cent Coca Cola would steamroll into today’s $55 B energy drink market?

Growing from a niche category, energy drinks have helped to offset declining carbonated soft drink sales in the U.S., which according to a recent article in Fortune, is in its 11th consecutive year of decline. At $3B in U.S sales, Red Bull dominates the category with its closest rival, Monster Energy, finishing a distant second at $1.5B.

Earlier this year, in an effort to understand the market, we used our social media monitoring tools to learn if the volume of social media conversations mimicked the brands’ sales performance. It did. For a one month period, we used Twitter to listen in for mentions of Red Bull, Monster Energy and Rock Star.

Here is what we discovered: Red Bull was the clear volume leader – not just in product discussions, but also in mentions connected to their brand building investments such as event sponsorships in motorsports, extreme sports, or video games. Perhaps music to the ears of the brand managers responsible for the marketing spends. This was true for Monster and Rockstar as well.

Also common to all three brands, a sugar free variety topped the list of product mentions. Using sales as a proxy for popularity, it’s interesting to note this is in direct contrast to diet soda sales, which have retreated from their peak in 2006 by 30%.

By the Numbers
In a one month period, we collected 17.6k brand mentions in Twitter. Who is winning the most attention? As suggested by the sales performance, Red Bull collected the most brand mentions at 46.8%. Monster finished second with 39.6%, followed by Rockstar at 13.6% – 33 points behind Red Bull. 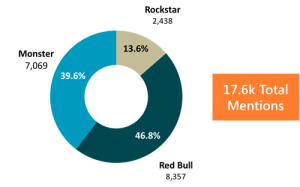 Drilling down, we dissected the product mentions into the share by flavor. For Red Bull, we collected and ranked 8.4 k mentions. Again, here too, a wide gap between the first and second place finishers. Sugar free was mentioned over two times more vs. cranberry. 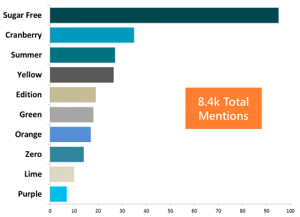 Looking at number two, Monster, we reviewed a little over 7k mentions. Like Red Bull, their number two, Java, was far behind the variety with the most mentions, Ultra. As previously mentioned, Monster’s top finisher is sugar free. 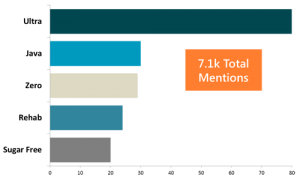 Rounding out the top three was Rockstar with 2.4k mentions during the one month of observation. Here too, the popularity of their most mentioned variety, Zero, was sugar free and twice as likely to be mentioned as number two, Recovery. 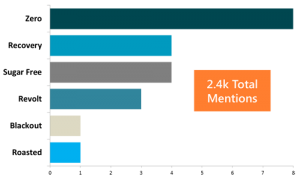 Our love affair with caffeinated drinks is centuries old and ubiquitous. By some accounts, it’s fueling an always-on high-energy lifestyle in much the same way that social media is keeping us perpetually connected by way of any device, anywhere and at any time. With an estimated 2.1B smart phones in use globally and daily tweet counts exceeding 500 million, it’s exciting to consider how we might tap into the huge and near real time focus group we call social media to learn more about consumer behavior. As marketers and service providers, we know that our future will depend on what we know and how we use it to make us faster, smarter and more relevant to the markets we all serve.