Influence. This is the new must have, and sought after, attribute online.


It has been reported that some hotels in Las Vegas, for example, check on how influential their guests are in social media – and give them better rooms and attention if they are. This is in the hope that they will influence others to chose their hotel.


As social media becomes mainstream, there is a need and desire by companies to find out who they should focus on to get the most impact.
Influence is the latest hot topic when it comes to online activity, especially in the social media arena. With everyone and their mother (literally, their mothers!) now engaging in social activity online through tools like Facebook, Twitter and Pinterest, the challenge has become for brands and companies to know who they need to focus their efforts on to have the most effect.


The battle is on to work out how best to identify and measure influence.
The importance of “Influencers” has emerged, and it is a hotly fought territory as online innovators, major tracking companies and bloggers and social media publishers are trying to figure out what constitutes “influence”. But also more importantly how to measure it. All are seeking to define the key measure, and to take ownership of it, as the “currency to measure influence”. There is potentially a lot of money to be made by the one that can create and own that standard of measure.


What is an online “influencer”?
Michael Brito in his book “Smart Business, Social Business” defines influencers as: “An influencer is someone with significant social capital – that is, influencers have sizeable audience on the social web…(they) are considered influencers because if their level of influence not the community reading their content”


I think influencers have these attributes:

Many organizations are trying to create the standard for measuring influence online.
There are many trying to do just this. One common trait is they are looking to create a new proprietary measure or “currency” to measure influence.


The main big global ones across total social media web:

Klout: “The standard for influence”
Probably the best known and most talked about is Klout, who bill themselves as “the standard for influence”. They create a score based on your usage, how many people you reach and what they do with your content across a number of social networks. You are classified by different types. At time of writing this I was a “specialist” which they define as: “You may not be a celebrity, but within your area of expertise your opinion is second to none. Your content is likely focused around a specific topic or industry with a focused, highly-engaged audience”. 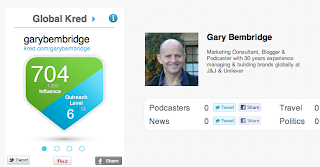 Kred: “Measurable influence. Real-time transparent community based influence measure”
The challenger to Klout, Kred was based in the same office block at time it was set up. Kred has 2 key measures: Kred Influence measures a user’s relative ability to inspire action from others like retweeting, replies or new follows.

Kred Outreach measures generosity and rewards actions like engagement with others and willingness to spread the message.

PeerIndex: “understand your social capital”
Peerindex measure:, Authority (measure of trust; calculating how much others rely on your recommendations and opinion in general and on particular topics), Audience (indication of your reach taking into account the relative size of your audience to the size of the audiences of others). and Activity (how much you do that is related to the topic communities you are part of). The highest score overall is 100. They seem to only really measure Twitter and are really the 3rd choice behind the other 2 approaches. 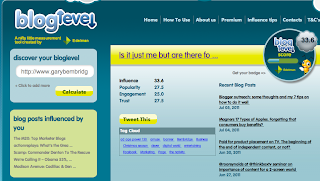 Edelman is a PR and Social Media agency that craeted BlogLevel that is trying to define a new standard in the influence that blogs have, by building in readership, links and also social media. They say: BlogLevel is unique in that it recognises that in order to measure a blog’s influence it needs to capture information beyond the traditional method of ‘authority of inbound links’ to also include discussion of the blog on social media platforms and use of SEO.

More topic and category specific
Then there are more category and even site specific attempts to define influence related not just to the whole web – but to try and make it much more specific to a topic – but also try and build in other measures than just sharing of content and number of followers. 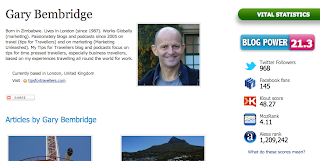 For example a Travel site TravelwithaMate.com has created their won score pulling in various measures of both social media but also the traffic and volume of the blogger’s site traffic.
This is my one on the left, where they try and quantify the quality of content and visitors.


The big watch out?
In my view though, the potential issue or flaw is that all tend to rely very heavily on the extent to which content or blogs get comments or are shared on Twitter, Facebook, Google+ and so rely very heavily on the assumption that sharing content equals quality and influence – as they cannot measure impact otherwise.
It is hard to see what else can be measured, but I am not entirely convinced sharing is the be all and end all of influence.


What do you think about influencers, their role and measurement? Please leave a comment on the blog posting and share using the sharing buttons below