One of the most daunting tasks for any business is choosing the right PHP development framework to build a robust web application. PHP frameworks are not recently discovered technologies but Laravel is one of the newest kids on the block. It has exploded in popularity and gained immense momentum in no time at all. As a result, Laravel development services have received huge recognition when compared to its contemporaries.

Reports suggest that there has been a steady increase in the usage of Laravel framework over the last year. 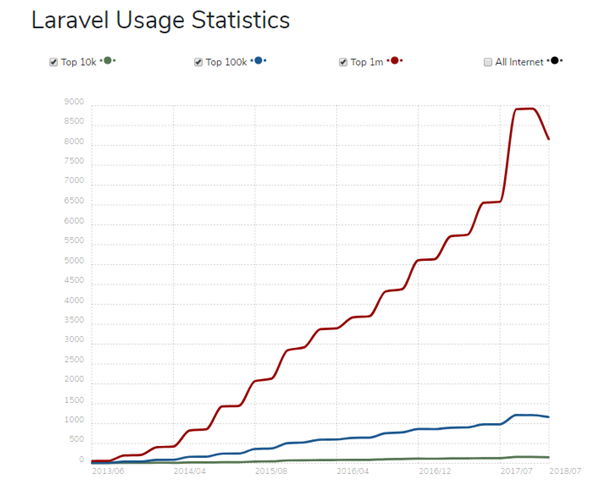 That said, let’s understand why Laravel is the most preferable choice for web development and why it has gained more momentum than Symfony, the PHP framework that falls in the same league.

As Laravel has facilitated the execution of authentication techniques, it has become an indispensable part for any Laravel development company. It offers an easy way to assemble the authorization logic and manage access to resources. Besides, most of it can be configured extraordinarily.

Responsable Interface is an advanced feature added in Laravel 5.5 in August 2017. It is a class that can be utilized for the implementation of the interface and returned with the help of controller method. Subsequently, the router will assess the instance of Responsable.

Laravel comes with Blade templating engine that is lightweight, easy-to-use, and robust. This templating engine is better when compared to others because it does not limit the usage of plain PHP in the template’s view part. On the contrary, to make things easy and mitigate overhead, they are created as plain PHP and cached as such until any modifications are made.

If the developers can learn more, they can be a better professional. With Laravel, the developers get access to Laracasts that include free and paid video tutorials explaining the usage of Laravel. Jeffery Way, a proficient instructor shares his insights in these videos. Because of these valuable lessons, it becomes a breeze to use Laravel for website development.

It is of utmost importance to maintain a sync of the database between development machines. Laravel database migrations makes it absolutely convenient to align the database. It is quite likely that you have made several alterations to the database and hassle-migration makes Laravel one of the most preferred PHP framework for website development.

Cyber crimes are increasing at an alarming rate, owing to which it becomes incumbent upon web developers to ensure the security of the application. Laravel employs salted and hashed passwords. This implies that the passwords will never be saved as plain text in the database. Bcrypt hashing algorithm generates an encrypted depiction of the password and mitigates the security concerns. Injection attacks become almost impossible as it uses prepared SQL statements. Moreover, it prevents the injection of tag by applying a simple method.

Take a look at the main security features offered by Laravel:

Laravel supports Model-View-Controller (MVC) architecture that maintains clarity between logic and presentation. It enables optimum performance and proper documentation. The multiple functionalities that it comes with serves like an icing on the cake. Take a look how MVC is implemented for Laravel. 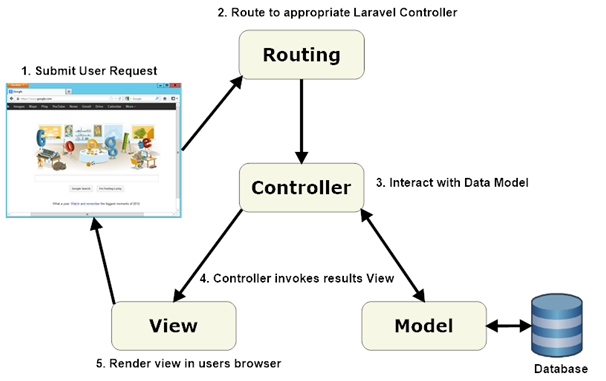 Typically, a developer is supposed to interact with the Laravel framework with the help of a command line. It facilitates the creation and management of Laravel project environment. For this command-line, Laravel has an in-built tool known as Artisan. With the help of this tool, you can carry out all the repetitive and tedious tasks of programming with ease, without the need of any manual efforts.

Object-oriented libraries and several pre-installed libraries make Laravel the leading PHP framework. An important pre-installed library is the Authentication library. Despite the fact that it is an absolute cakewalk to incorporate it, there are numerous advanced features in Laravel, namely Bcrypt hashing, password reset, checking active users, CSRF (Cross-site Request Forgery) protection, encryption, and checking active users to name a few.

In the previous versions of Laravel, installing packages was not very user friendly. Laravel 5.5 introduced a new feature known as Automatic Package discovery that automatically identifies the packages which the users might want to install. This proved to be a respite for the developers as they do not have to setup any aliases or providers for installing the latest packages in Laravel. Apart from that, this version also lets the developers disable this feature in case of specific packages.

Laravel offers remarkable features like multilingual support that expands the website reach, and enhanced security for an application. Doing so helps the companies to make the most of its potential. In addition, Laravel has native support for Memcached and Radis caching systems. The cache driver gives you the functionality to store diverse cached objects and build applications quickly. The scalability of this framework ensures efficient traffic management on the web servers with a unique message queue system when any project development starts.

If you are looking for a framework that enables customization, Laravel is the safest bet for you. It is not only competent solution but also comes with interactivity. This feature is useful for established businesses as well as startups that are yet to build their digital presence.

Laravel can really be a useful PHP framework for your next project owing to its growing popularity and useful features that improvethe process of development. If you are looking to harness Laravel’s capabilities to build a cost-effective app, you can think of hiring a Laravel developer who is familiar with all its features and capabilities.

By getting in touch with an experienced Laravel development company, you can build a scalable and intuitive solution that meets your dynamic business growth needs. So, what are you waiting for? Connect with our Laravel experts now.