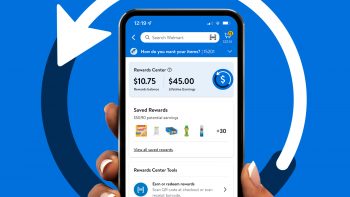 Imagine walking down the peanut butter aisle of Walmart. Jif is on sale, and you recently enrolled in the retailer’s new customer loyalty initiative, Walmart Rewards. How easy is it to turn that purchase into a reward?

Depending on the circumstances, the answer – like that peanut butter ­– can be sticky.

Walmart Rewards, a new feature of the Walmart+ membership program, is designed so Walmart+ members can, in addition to other benefits, earn rewards on products “associated with a selection of the items that you shop for every day,” according to the program’s FAQ page. Each time members search for products on Walmart.com or on the Walmart app, they receive options to earn rewards on “hundreds of bestselling items.”

The stickiness is in the details. Like all reward programs, Walmart Rewards has guidelines. Many of them stem from its connection with Walmart+, a paid program that comes with free delivery, special prices on fuel and free scan-and-pay services.

This association could give Walmart Rewards a notable edge, but some of the guidelines may be hard to swallow for potential members (such as interpreting reward item prices from Walmart’s everyday low pricing). Looking into the program’s FAQ page and terms and conditions, here are a few notable Walmart Rewards power plays, and a handful of potential weak spots.

Walmart Rewards is a gateway to data-sharing partnerships. Walmart plans to integrate its rewards program with its digital advertising business, Walmart Connect, through which suppliers can advertise to Walmart shoppers online, in its app and in stores. Such “retail media networks,” as described in Forbes, can open significant revenue streams for Walmart and expose its suppliers to instructive shopper data. In 2021, one-fourth of retailers reported revenue gains of more than $100 million from their media networks, according to Insider Intelligence. By 2023, the industry is expected to generate $50 billion, eMarketer projects.

Walmart Rewards offers a one-stop venue for member information. Walmart+ members who enroll in Walmart Rewards can track their points and lifetime earnings on the centralized online Rewards Center. Available on Walmart.com or the Walmart app, the Center will make it easy for members to engage in the program while on the fly, which could generate helpful behavioral and store-tracking data, in addition to more purchases.

Walmart could use member data to build, build, build. In its program announcement, Walmart stated that it will first focus on delivering rewards to Walmart+ members, then expand the program to introduce other ways to earn rewards. It’s not yet clear how, or if that means Walmart Rewards could become eligible to those who do not pay for Walmart+. Member data might determine that decision, but Walmart recently gave us an idea of what it can do when it added free Paramount+ Essential subscriptions as a Walmart+ benefit.

Weak Spots That Might Stick To The Roof Of Your Mouth

Members must pay to play. While Walmart Rewards is free, it requires enrollment in Walmart+, and that program charges $98 a year or $12.95 a month, according to the Walmart+ membership plans page. This cost may be too high for many Walmart customers who shop there to save money. That said, one-third of Walmart+ subscribers enrolled in the program for the members-only deals, according to PYMNTS. One outstanding question: Will those who are not members lose confidence in the price credibility of items not part of the program?

Users must have smartphones. Customers who shop in-store must download the Walmart Pay app to participate in the program, basically excluding those who do not own smartphones. It also may present friction for shoppers who are uneasy about mobile payments. More than 75% of Americans do use some form of digital payment, including apps, according to a McKinsey survey. However, trust in the security of such payments has been declining – down 15% in 2021. Walmart should be prepared to prove the safety and security of its app.

Program use requires several steps. To earn item rewards, shoppers need to scan the barcode on their product receipts and submit them to Walmart’s online Rewards Center within seven days of purchase. To redeem rewards in-store, shoppers must scan a QR code generated through the downloaded Walmart Pay app and then tap “Use Walmart Rewards.” Online shoppers can add the benefits at digital checkout. To some, this may be easy breezy; to others, it may not.

Rewards are available only via an eGift card. All rewards earned through the loyalty program are stored on a Walmart eGift card, according to the Walmart Rewards’ terms of use. This likely means no freebies or cash-back offers like those offered by other reward programs, and it could present “terms of use” limitations. Walmart’s eGift card guidelines, for example, limit the number of cards a customer can hold to five. Members who receive lots of gift cards may hit that limit.

“Earn reward” items expire. This can be both a power play and a weak spot, depending on the customer and circumstance. Members can earn rewards on specific items, but those rewards have expiration dates. Even a saved item isn’t guaranteed a reward unless it is purchased before the expiration. This can generate a sense of FOMO, but it may result in resentment among those who did miss out due to travel or just plain forgot.

Everyday Low Prices Are Getting Complicated

Retail competition requires that Walmart invest in digital technology to remain relevant, and Walmart Rewards could be an essential tool to that end. No doubt, partner data-sharing via Walmart Connect could go a long way toward better understanding and serving its customers.

The task is proving the program’s value to those core customers who aren’t willing to pay for a membership, or go through the steps to earn and redeem rewards. These shoppers will let Walmart know what sticks.

This article originally appeared in Forbes.