Clearly, these are unprecedented times with broad-scale statewide stay-at-home orders, and economic shutdowns across all non-essential businesses. Ten weeks after the first San Francisco Bay Area counties ordered residents to “Shelter in Place,” and 7 weeks after all but 9 states did the same, a few signs of what may be coming are beginning to emerge.

Congress pumped $2.2 trillion (with a “T”) into the economy very quickly and, very quickly, it seems to have been used up. The House is now looking at another T, for state and local governments. All this while worldwide 3.3 million people have been infected by Coronavirus and 234,000 have died (as of 4/30/20).

All this to say these are challenging times requiring courage, imagination, steady nerves, and determination. What might these look like in terms of sales and those overseeing sales organizations?

When business is “normal,” there seems to be a disproportionate emphasis on “adding new logos.” That is, pursuing and signing new customers, reflected in growing market share. But when times toughen and budgets tighten, taking care of current logos becomes a much higher priority.

In 2008, one VP of Sales intensely focused his team on connecting and closing opportunities with existing accounts. If this absorbed all the organization’s selling bandwidth, he didn’t care, because he was seeing how few new opportunities would be emerging. They were there to jump on every opportunity where they were already entrenched, meaning their odds of winning were that much better. They only looked at other opportunities when they were certain they had fully covered the landscape of their existing customers.

Of course, “covering the landscape,” today, may mean something very different in terms of how you do so. Thankfully, so much contact today is virtual, much of the business of staying in touch had already shifted from in-person visits to digital touchpoints. We are seeing companies beginning to leverage sales tools more fully; tools they have had for some time but for which adoption had been spotty.

As holdouts are finding they can’t go visit their accounts, they are learning to productively use tools and programs they’d been avoiding.

With basically everyone working remotely, and largely in isolation, there are new pressures. One sales manager we recently talked with has a rep whose wife is a nurse in New York City. She is working what seems like non-stop, on the front lines of the daily battle with this virus. While he’s familiar with her being at work, this is an entirely new level of anxiety associated with her daily exposure to patients. At the precise same time, when he would normally be dropping his two kids (3 & 5 years old) off at his parents, he can no longer do so, because they are part of a vulnerable population (over 65).

These sorts of compounding pressures are playing out daily, across the board, and largely with little support beyond “hang in there,” and “we’re all in this together.” One SaaS company was surveying its employees daily, asking each individual how they’re doing—and how they’re feeling. Remaining close is not just good advice with existing customers, it’s also a good strategy for your workforce.

It’s hard, if not impossible, to know what conducting business, in general, and sales, in particular, is going to look like in the coming months. However, it is not a big leap to imagine there will be far more online meetings and much less calling in-person. Similarly, companies, led particularly by CFOs and Facilities Managers, will be weighing more work-from-home flexibility versus requiring office only options.

These changes are likely harbingers of the “New Normal” or, as I recently heard, the “New Abnormal.” Either way, you still have a number to deliver and, the good news is, there are tools and examples to do so.

The Sun Will Come Out Tomorrow—or the Next Day

It was reported on 4/29/20, more than 61,000 lives had been lost to Coronavirus in the US, and that the GDP shrunk by 4.8% in Q1. It’s likely this downward spiral will continue through Q2. As dramatic and tragic as these early weeks of the Covid-19 crisis are, this too will pass. How soon? Not soon enough, is the only honest answer. But, if you’re among the 99% who survive the pandemic (80% will be asymptomatic, 94% of those with symptoms expected to recover), you will live to sell another day.

During the GR, people exhibited what we called the “T-Rex Syndrome.” Keep your head down, don’t move, and maybe you won’t get eaten. Do your job, don’t make any noise, and maybe you’ll stay employed.

Before Covid-19, the Dow was on a 10-year bull run and unemployment (in the US) was 3.5%. As of the end of April 2020, 30 MILLION claims were filed for unemployment! The highest figure ever and thought to not count all those that could not (busy phone lines/servers) or would not (undocumented workers) file claims.

Many companies during the GR felt, rightly so, that they had extra leverage over their employees because they were favorably positioned to weather the storm then. Some in essential services, or well-funded companies that have been virtual, or virtually-enabling their sellers, may feel they are in the catbird’s seat now.

Firms are looking at voluntary pay reductions, job sharing, or other ways to keep their teams together and keeping them functioning. They are also keeping them loyal. Sharing the load, spreading the pain, investing during tough times in their tools, skills, benefits—in them–will show that you’re in it together.

Some firms (e.g., Amazon, FedEx, UPS) are experiencing huge revenue growth, even as they report increased expenses for safety and distancing accommodations. Other firms (e.g., airlines, hotels/hospitality) are being crushed by the global lockdown. Still other non-essential firms have yet to feel a major change—other than ALL employees working from home—though that could change if re-opening the economy is slowed or stalled.

Do Right By Your Reps

What will this mean for sales targets, compensation plans, bonuses? Again, it’s probably too early to offer definitive answers. Should reps at companies experiencing a windfall in revenue increases be paid big commissions? Conversely, should reps at companies being crushed be penalized for hanging onto half of their clients, which may be a major accomplishment?

Likely there are as many opinions on these questions as people you ask. But, since it’s my column, I’ll offer my best suggestion. The most important topic I’ve learned in sales and can share with you is Win/Win. Many people think this is an idealized concept not relevant in the real world, Mr. Nice Guy, or some other trivializing characterization. I believe it is always applicable, especially in tough times (and these are TOUGH TIMES!), that Win/Win provides a path out of these deep, dark woods.

The diagram shows the most basic relationship, that between two individuals: You (buyer) and I (seller). Either of us can win or lose, yielding 4 possible outcomes. We both win (Win/Win). We both lose (Lose/Lose). These are the only 2 stable quadrants. The former results in long-term, successful and rewarding relationships. The latter exemplified in relations that have crashed and burned, unlikely to rise Phoenix-like from the ashes. 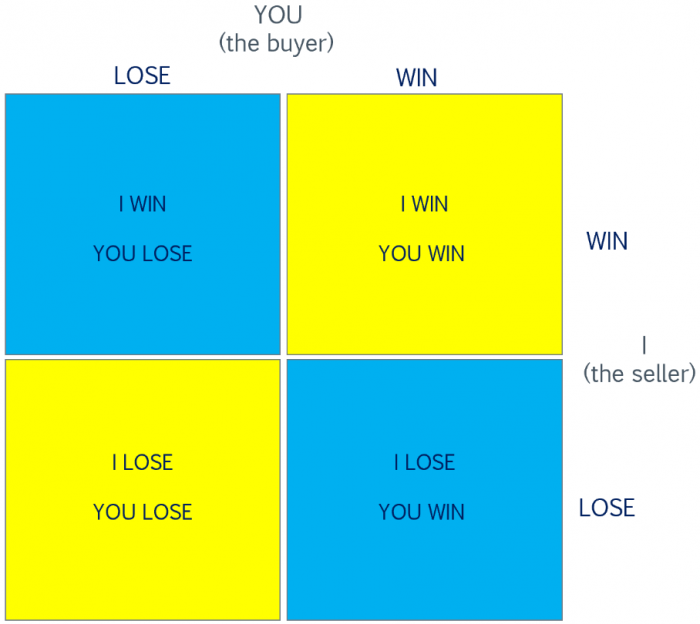 The other 2 quadrants are where creating Win/Win outcomes become challenging. An example of You Win/ I Lose would be a buyer in a strong cash position leveraging a service provider (e.g., PR Agency) to renegotiate a longer-term, much lower-rate contract for campaigns during this crisis. The agency may swallow hard and accept the poor deal, simply to try and keep team members on the payroll versus being furloughed.

If you read about the people gouging customers by charging $15/mask (when pre-crisis prices might be 25¢ apiece), you know what I Win/You Lose can look and feel like.

One key to playing Win/Win is to neither create a lose for the other party, nor accept a lose from the other. If this sounds simple, it is. If it sounds easy, it’s not. But if both parties are committed to a Win/Win outcome, are committed to the relationship, you can work it out.

Remember the rep with two pre-schoolers at home and a nurse/wife? Imagine the significant bonus he earned is now on HOLD because the company has rationally decided it needs to husband cash in these uncertain times. He may get the bonus after, but it has been devastatingly deferred. At this moment, it is yet another pressure in an already pressured situation.

What can you, as this rep’s manager offer? There are no simple answers but displaying genuine concern, figuring out what resources (leads, flexible/reduced hours) you can control/influence to ease this rep’s hardship will matter. Now and when things improve.

During the Great Recession, a VP of Sales we interviewed in an industry that was hard hit, reduced his sellers’ targets by 10%. His number was not reduced but he felt he could sustain the hit, essentially be the buffer, better than his people could. The lightened load spurred his reps to do more and, in the end, things worked out. They didn’t blow out their number but they came acceptably close to their original target.

This is real stuff. People are stressed and hurting and, yes, some are dying. It is both scary and in many ways, beyond our control. Still, there are things we can control. Washing hands, wearing a mask outside. Checking in with our reps regularly to assess their current state of mind and emotion. Being disciplined in reaching out to customers and prospects. Leveraging technologies at hand to new and increasing levels of effectiveness.

This, too, will pass. Indeed it will. But, until it does, keep your focus, spool up your enthusiasm, and play Win/Win as you do these two things:

You’ll hang onto top performers now and be less vulnerable to them being poached away by competitors when the sun shines once again.