Psychologists will tell you that carrots are a far more productive strategy than sticks. You might think this is a blindingly obvious statement, but the facts don’t always support it. Sometimes the psychologists are proven wrong.

That is exactly what happened to Daniel Kahneman.

In the 1960?s he was giving a lecture to a group of Israeli air force flight instructors about the psychology of training, showing how experiments with pigeons had demonstrated that rewarding good performance was far more effective than punishing poor performance. His belief was that when it comes to learning and development the carrot is far more powerful than the stick.

“With respect Sir, what you’re saying is literally for the birds… I’ve screamed at people for badly executed manoeuvres, and by and large the next time they improve.”

“I’ve often praised people warmly for beautifully executed manoeuvres, and the next time they almost always do worse. Don’t tell me that reward works and punishment doesn’t. My experience contradicts it.”

The rest of the audience agreed. Worse still, when Kahneman looked at the data it was true. Punishing poor performance works and rewarding good performance is clearly counter productive. This left Kahneman a confused and worried man.

We need to switch topics, I need to talk about dice for a second, but I will come back to it.

If you roll a couple of dice repeatedly the score you get changes over time. It looks a little like this. 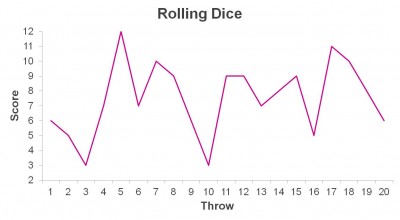 Why does the score change? Because there are a whole host of random factors effecting it

But the system (the two dice) didn’t change. So although performance (the score) jumps up and down, nothing actually changed.

It is just noise.

Remember the story about the flight instructors? Well a while later Kahneman learnt about variation and “regression to the mean”. That may not sound like a fascinating topic. But it held the solution to his problem.

Over the short-term how well a pilot lands his plane changes from one day, depending on:

If you look at the long-term average a pilot will get better as he develops his skill. But in the short-term you might as well be rolling dice. 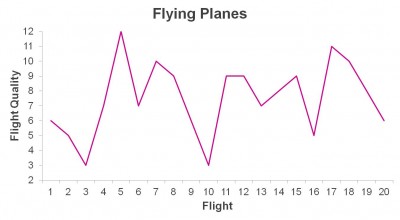 If you land your plane badly (or roll a double one) and your flight instructor screams at you, chances are next time your performance will get better.

If you land beautifully (or roll a double six) and he praises you, chances are next time your performance will be distinctly average. It will “regress to the mean”. 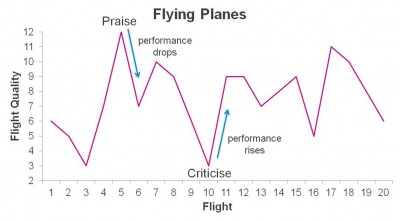 Of course that has nothing to do with the behaviour of your manager / coach / flight instructor. All he has managed to do is piss you off (strong but true).